There was some chatter before on the web that NVIDIA’s upcoming RTX 30 series Ampere gaming GPUs may utilize a new 12-Pin power connector interface. And now, according to TweakTown’s industry sources, it has been confirmed that only the reference Founders Edition RTX 30 GPUs may use this new 12-PIN PCI-E power interface.

We have already seen power consumption figures exceeding 300 Watts on some of the Ampere cards before. The cooler and the heatsink also appear to be a huge update over the traditional reference design that NVIDIA has offered over the years. If TweakTown’s sources are to be believed, then we may get this new 12-pin power connector interface support only on the Founders Edition GPU lineup, but since this hasn’t been officially confirmed, we need to treat this as a rumor for the time being.

Previous rumors mention that the new power delivery interface would be utilized by Ampere Gaming graphics cards having the ‘PG142’ board number. We can assume that these might be the high-end flagship GA102/GA104 GPU-powered gaming cards such as the RTX 3080 Ti / RTX 3090, RTX 3080, RTX 3070 Ti / RTX 3070 etc.

The 12V 12-pin connector looks similar to the Molex Micro-Fit series of power connectors which are 19mm wide and have a 3mm pitch. This is the same width as two 6-pin power connectors that current PSUs offer but has a current capacity of 8.5A, as compared to 6A capacity of the mini-Fit 5556 connectors. You would assume that the mini-fit would deliver 600 Watts of power but that’s not always the case since the actual power delivered to the GPU is around 400W at 6 Amps.

The 20AWG specifications for the pins appear to be a primary bottleneck with traditional connectors. This new design change may be specific to the NVIDIA’s reference ‘Founders Edition’ Ampere SKUs, while AIBs can still ship their custom designs with traditional mini-fit power connectors. If you are currently rocking a high quality Tier PSU, then there should no problem using two 6-PIN PCI/PEG connectors. Most of the high-end reputed PSUs come with multiple 6 and 8-PIN PCI-e connectors.

Power supply makers might use 20AWG wiring for these connectors to meet the power specifications. As evident from the power interface image (see below), the new 12-pin connector looks like 2 x 6-pin PCIe power connectors mashed together, which offer 8.5A versus 6A. This 12-pin interface might already be in use in some of today’s applications. Molex makes interface for anything, and not just limited to power supplies. It is just that this interface might be used in some power supplies for the first time, though we don’t know for sure. Molex does have a similar connector with the same width as the 6+2 pin but with more pins. It’s called ‘Micro-Fit 3.0 Receptacle Housing, Dual Row with 12 Circuits’. More details can be found here.

The 12-pin connector appears to be real. The connector appears to be NVIDIA’s brain-child, and not that of any other IP- or trading group, such as the PCI-SIG, Molex or Intel. The connector was designed in response to two market realities, that high-end graphics cards inevitably need two power connectors; and it would be neater for consumers to have a single cable than having to wrestle with two; and that lower-end (<225 W) graphics cards can make do with one 8-pin or 6-pin connector. The new NVIDIA 12-pin connector has six 12 V and six ground pins. Its designers specify higher quality contacts both on the male and female ends, which can handle higher current than the pins on 8-pin/6-pin PCIe power connectors. Depending on the PSU vendor, the 12-pin connector can even split in the middle into two 6-pin, and could be marketed as 6+6 pin. Point of contact between the two 6-pin halves are kept leveled, so they can align seamlessly.

As for the power delivery, we have learned that the designers will also specify the cable gauge, and with the right combination of wire gauge and pins, the connector should be capable of delivering 600 Watts of power (so it’s not 2*75 W = 150 W), and not a scaling of 6-pin. Looking at the keying, we can see that it will not be possible to connect two classic six-pins to it. For example pin 1 is square on the PCIe 6-pin, but on NVIDIA’s 12-pin it has one corner angled. It also won’t be possible to use weird combinations like 8-pin + EPS 4 pin, or similar, since NVIDIA made sure people won’t be able to connect their cables the wrong way.

On topic of the connector’s proliferation, in addition to PSU manufacturers launching new generations of products with 12-pin connectors, most prominent manufacturers are expected to release aftermarket modular cables that can plug in to their existing PSUs. Graphics card vendors will include ketchup-and-mustard adapters that convert 2x 8-pin to 1x 12-pin; while most case/power manufacturers will release fancy aftermarket adapters with better aesthetics.

It will be interesting to see how power supply manufacturers respond to this. Maybe they’ll sell ’12-pin modular’ cables for selected power supplies as an add-on?  Intel already published the 12VXO power supply specification standard on May 2020 and I think one manufacturer showcased one 12v unit at the CES2020 event before.

NVIDIA’s upcoming RTX 3000 series Ampere cards are rumored to be built on the Samsung’s 8nm process node. Nvidia has also stated that gamers should expect Ampere graphics cards to arrive on the GeForce Now streaming service. Renders of the ASUS ROG Strix custom GPU were already leaked before. Nvidia has also recently ceased the production of the RTX 20 series of GPUs to make room for the Ampere lineup. Nvidia is hosting a Geforce Special Event on September 1st, and we expect the company to announce the next-gen Ampere Gaming GPUs. 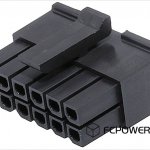 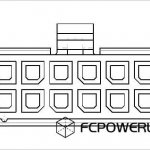 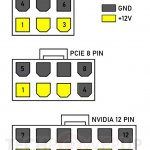