It appear that we have first real pictures of NVIDIA’s upcoming RTX 3080 “AMPERE” graphics card which have been leaked out on Chiphell,  coming via HXL, and Videocardz. The Model seems to be a “prototype” engineering sample of some sort.

Nvidia might launch the Ampere series of GPUs later this year, most probably at the virtual Computex conference or around that timeframe. Judging from the photos we can see some slight design changes.

First off, the fans are bi-directional, and both fans seem to be placed on opposite sides of the card which might help push the air in different directions. Next, the “heat sink” is curved. This prototype RTX 3080 design also features an irregular V shaped PCB.

By looking at the rear of the card, we can see that the PCB is irregularly shaped and ends when it touches the heatsink.  Only the grey plastic part covers the PCB, the fan section does not. We can’t see any PCI-E/PEG power connectors, as they might be on the side, but there seems to be a new version of the NVLink connector near the I/O bracket.

This model definitely seems to be a “Founder’s Edition” SKU. The final retail product might feature a slightly modified or a different design as well, including the custom AIB cards.

NVIDIA has not confirmed any launch dates yet, but since the design has already been leaked now, it appears we are much closer to the launch. Nvidia’s Ampere lineup of cards are going to be fabbed on the 7nm process node. 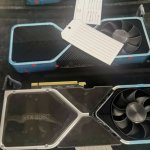 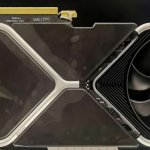 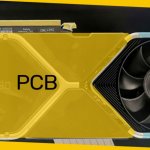 WCCFTech has also posted a new article with some potential specs. The GPU may ship with with GA 102-200 and 4352 CUDA Cores.