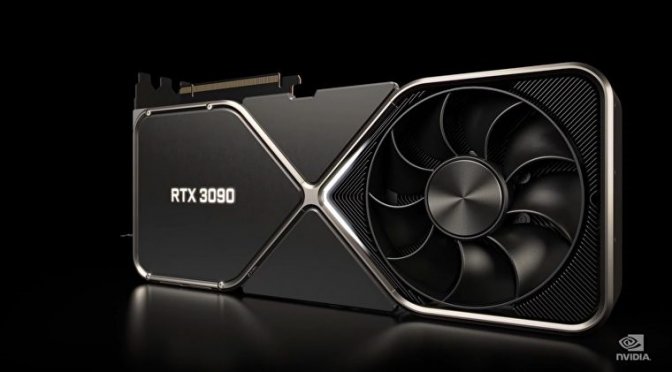 NVIDIA has just published a new blog post detailing the performance of the upcoming flagship RTX 3090 GPU, which Nvidia refers to as the ‘BFGPU’, aka big, ferocious GPU. Some official performance metrics have been posted.

According to the green team, the GeForce RTX 3090 flagship GPU is only 10-15% faster than the RTX 3080 in 4K gaming. Nvidia claims the card is designed specifically for gaming at ultra-high resolutions such as 8K, and it is also the fastest GPU for professional applications. What this means is that the RTX 3090 is basically a prosumer-class product.

Since the official unveiling, the GeForce RTX 3090 has been advertised as a TITAN GPU replacement. The company claims that the card was designed for the most demanding users, and not just gamers but also professionals and content creators alike, who can benefit from the massive horsepower this card has to offer. This GPU would be more useful for applications such as data science, AI research and to render next-generation cinematics and movies.

The RTX 3090 appears to be a great choice for creators making cinematic content, and also researchers who can harness the AI performance of this new flagship GPU. Though, Nvidia also claims this GPU is an 8K-capable gaming card, which was already shown in some videos as posted by LinusTechTips and MKBHD recently. LG’s Signature ZX 88 inch TV was used for 8K gaming.

Since Nvidia is now advertising the RTX 3090 flagship TITAN-class graphics card for productivity, while at the same time promoting it for 8K gaming as well, so this may raise some slightly controversy within board partners, reviewers, and gamers alike.

Like mentioned before, the RTX 3090 is only 10 to 15% faster in 4K gaming, when comparing it with the RTX 3080 GPU. But the performance of the card appears to be much better in synthetic and productivity workloads. According to Nvidia, the RTX 3090 is up to 50% faster than the Titan RTX graphics card. Nvidia has also shared a chart which shows the GeForce RTX 3090 to be twice as fast as the Titan RTX in professional applications such as Luxmark, Blender, V-ray, and Red Shift, as shown below. 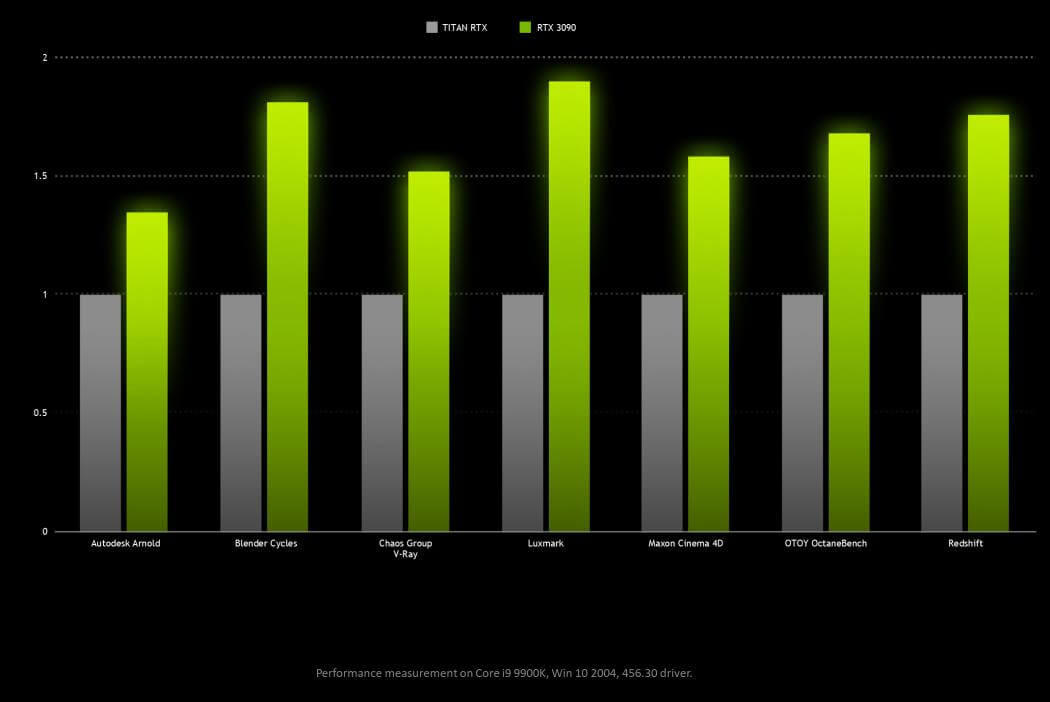 “For gamers pushing the limits, the GeForce RTX 3090 is also the first GPU that lets you connect, play, capture, and watch in 8K HDR. That’s an insane 4x the pixels of 4K and 16x the pixels of 1080p.

Since we built GeForce RTX 3090 for a unique group of users, like the TITAN RTX before it, we want to apologise upfront that this will be in limited supply on launch day. We know this is frustrating, and we’re working with our partners to increase the supply in the weeks to come.”

The Nvidia GeForce RTX 3090 has a starting price of $1499 and will launch on September 24. This makes the RTX 3090 the most expensive gaming-grade graphics card currently in the market. Yes, it’s expensive but this graphics card is for aspirational gamers, content creators, and pro consumers.

The RTX 3090 is based on Nvidia’s Ampere architecture, which uses Samsung’s 8nm process node. The new card is capable of delivering 36 Shader-TFLOPS, 69 RT-TFLOPS for ray tracing, and 285 Tensor-TFLOPS for critical AI-related tasks such as deep learning super-sampling (DLSS).

The GPU comes with 24GB of GDDR6X memory, which Nvidia says is the fastest memory at the moment.  The RTX 3090 has a staggering 10,496 CUDA cores and will run at a boost clock speed of 1,700MHz. The monster GPU requires 400W to power it. As per Nvidia, the RTX 3090 uses a redesigned cooling solution with dual fans and a new 12-pin power connector.