Following Bioshock Infinite’s boxart reveal, Ken Levine, creative director and co-founder of Irrational Games, shared some new teases about Bioshock Infinite. According to Levine, the company will have ‘a cool something to show us about Elizabeth in the back of the box, and the key art soon.’

According to our sources, Anna Moleva (the beautiful cosplayer that most of you will have already seen in our previous Bioshock Infinite story) will be the real face of Elizabeth, and will be present in the back of the game’s cover, as well as the TV ad and the key art.

Not only that, but a TV ad is also planned. Unfortunately though, this TV ad won’t be revealed during VGA awards, although Levine tweeted that even his mother is excited about that event. Let’s also not forget that a lot of people believe that Bioshock Infinite will be demonstrated/showcased during that event.

Moreover, Levine revealed that there will be full sized Bioshock: Infinite paintings available for purchase.

It will be interesting to see what Irrational Games and 2K Games have in store for us, so stay tuned for more.

All in all, Bioshock Infinite’s hype campaign is about to start. Are you excited? 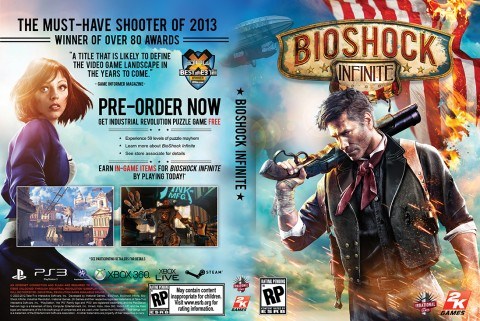