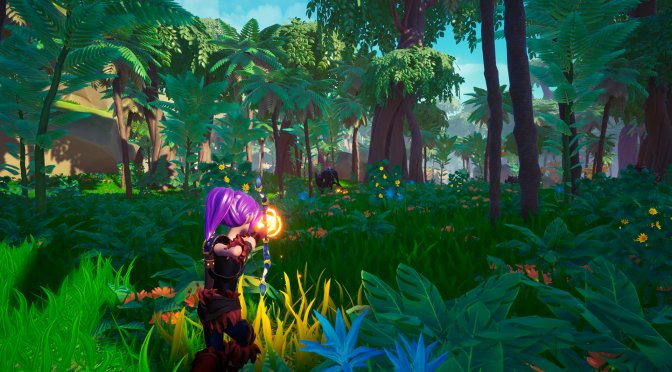 Apogee and Wreckit Games have announced a new open-world adventure game, Elements. In this game, players will assume the role of Nyah or Beckett. Players will accept their calling as either sibling, playing solo or drop-in co-op.

Players will have to reclaim the eight Elemental Stones—and their powers of Light, Dark, Fire, Water, Ice, Nature, Earth, and Air. Additionally, they cam explore every corner of a beautifully stylized open world.

“Climb snowy mountains, swim to the depths of glimmering lakes, and brave fiery plains in search of new challenges. Keep a sharp sword and sharp mind as perplexing puzzles hide the realm’s best secrets. You can also defeat monsters through many creative approaches; from skillful swordplay to magical mastery.”

In Elements, young Nyah and Beckett will find their destiny in a bold adventure of each player’s making. Each Elemental Stone recovered will bestow legendary gear with powerful traits and new magical abilities.

“Craft equipment to enhance combat strength, or find leisure in life by building a homestead, where the siblings can farm, store items, or simply relax. After all, a tough road through the wild awaits. Take nothing for granted. Learn from failure. Leave the world better than you found it.”

“When I first saw Elements, I was struck by Devon’s vision of a touching odyssey with important life lessons to impart. As an artist, I’m attracted to stories about optimism and brightness, and I can’t wait to imbue Nyah with those qualities.”

“As a parent, I’ve always looked for games to experience with my children and worlds we could enjoy together. With Elements, I get to make that world to get lost in with my kids. I hope other parents and players everywhere find similar value in this game that welcomes and rewards ingenuity and perseverance.”