Electronic Arts today announced preliminary financial results for its third fiscal quarter ended December 31st, 2017. According to the results, Battlefield 1 now has more than 25 million unique players life to date, and nearly 70% of players engaged in the single-player campaign in Star Wars: Battlefront 2.

“Players enjoyed hundreds of millions of hours in our games across console, mobile and PC during the holiday quarter, and we’re thrilled to see our titles driving excitement for more fans around the world. We’re expanding the reach of our top franchises across more geographies, our competitions are growing in participation and viewership, and we’re continuing to grow our network with more amazing games and content coming this quarter and beyond.”

“Our diversity in portfolio, platforms, geographies, and business models is the foundation of a robust business that enables us to deliver dependable cash flow. Through the fourth quarter and fiscal 2019, we’ll be launching games across five different genres, on three different platforms, and to players around the world. We expect growth in full-game downloads, subscriptions, extra content, and in our mobile business.”

Here are the selected operating highlights and metrics:

It’s also worth noting that the PC platform is not as profitable for EA as Xbox One or PS4. Below you can find some financial results per platform. 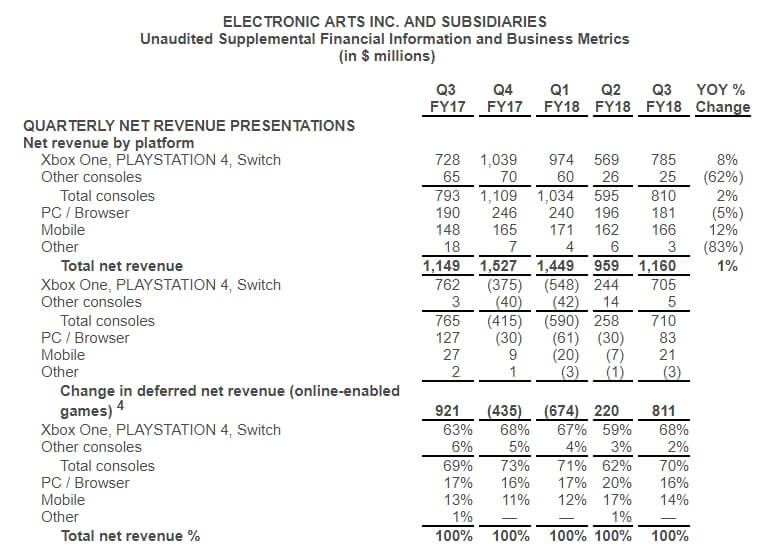