Surprising news everyone. DOTA 2 has entered its open beta phase (meaning that it’s completely free to everyone) and nobody has noticed it. Hell, even Valve has not sent any press release for it as of yet. As we can clearly see below, though, DOTA 2 does not require any beta key at this point. In short, everyone can log into Steam, search for DOTA 2, download and play it. And we can confirm that this is the real deal. 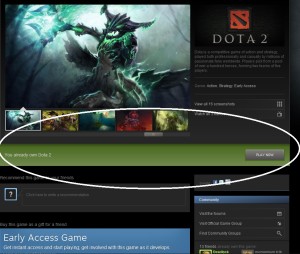 Originating as a fan-made Warcraft 3 modification, Dota was an instant underground hit. After coming to Valve, the original community developers have bridged the gap to a more inclusive audience, so that the rest of the world can experience the same core gameplay, but with the level of polish that only Valve can provide.

DOTA 2 is a competitive game of action and strategy, played both professionally and casually by millions of passionate fans worldwide. Players pick from a pool of over a hundred heroes, forming two teams of five players.

The game has been under closed beta for quite a while, and now everyone can get a taste of it.

DOTA 2 will be officially released later this Summer and will be a free-to-play title.