It’s no secret that CD Projekt RED is one of the most beloved PC developers out there. And while we are anxiously waiting for both The Witcher 3 and Cyberpunk, CDPR revealed that the PC version of The Witcher 3 will be the definitive version of it. Yes, The Witcher 3 is announced for next-generation consoles and PC, and from this comment we can be sure that CDPR is developing primary on the PC and will be porting its title to consoles after the completion of the PC version. That, or the PC is the lead platform for The Witcher 3’s development.

When a fan asked CDPR which version of The Witcher 3 would be best, CDPR replied and said that he should be getting the PC version. Obviously, that was not what the fan was asking for (as he was a console gamer) and replied that he was interested only on the next-gen consoles. CDPR then replied, wishing him to enjoy the console version, though they did not comment on whether the PS4 version would be better than the X720 one. 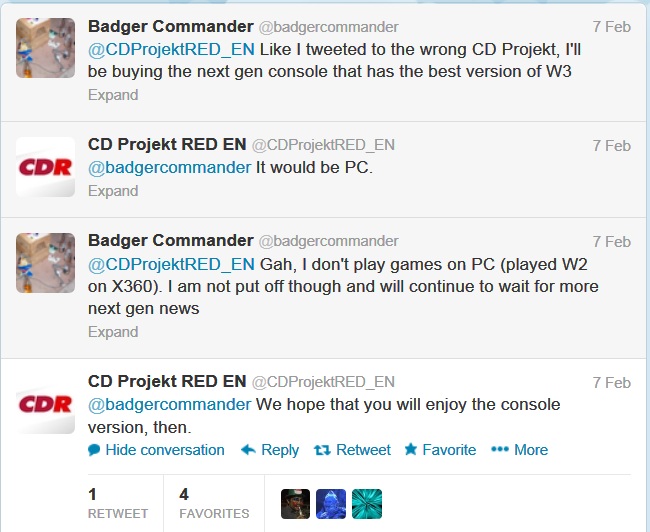 The Witcher 3 will be powered by REDengine 3 and promises to push the graphical level of open-world games to new heights. The Witcher 3: Wild Hunt will be the last part of the legend of Geralt of Rivia, though CDPR may re-visit The Witcher universe via another game.

The Witcher 3: Wild Hunt will be open-world with free-roaming exploration is, and will be packed with an improved combat system that will allow players to feel like a real monster-hunter, a witcher who uses his superior senses and fighting skills to survive in a dark fantasy world-while he embarks on a quest to save his loved ones.

The Witcher 3: Wild Hunt will not be coming to current-generation consoles (X360 and PS3). So far, the only confirmed version is the PC, alongside the console version for the 2014 ‘top-of-the-line’ consoles.