AMD also claimed that its high-end model will surpass Intel’s competitor, the core i9 10900K.

We now have some more info on Zen 3 CPU lineup. According to an official leaked slide published over at Technopat, coming via Wccftech, which is still under strict embargo, AMD‘s upcoming Zen 3 CPUs are going to hugely benefit from a faster clocked system RAM modules, and will offer great memory overclocking support out of the box.

Gamers can now leverage from higher-clocked/spec’d DDR4 memory kit modules. AMD is now recommending an even faster clocked DDR4 Memory support with Zen 3 lineup. AMD has already made many improvements and refinements to the new Zen 3 core architecture, and the chipset design.

However, the statement can also be inaccurate since AMD has suggested DDR4-3733 MHz as the sweet spot for the existing Ryzen 3000-series Matisse processors. Ryzen 3000-series Zen 2 SKUs allow synchronous operation between the Infinity Fabric clock (FCLK) and memory clock (MCLK) up to 1,800 MHz or DDR4-3600. Some really good samples can also handle 1,900 MHz (DDR4-3800) before breaking the 1:1 ratio.

If the slide and the information posted are indeed legitimate, the upcoming Ryzen 5000 Zen 3 processors would permit a FCLK up to 2,000 MHz (DDR4-4000). However, it’s important to highlight that DDR4-3200 is still the official memory speed spec supported on the Ryzen 5000 processors.

So basically in the end it still depends on the quality of the chip’s integrated memory controller (IMC), which dictates whether you can hit the higher frequencies or not. Nonetheless, we should exercise caution with any leaked slide/info posted on the web, and treat it as a rumor.

On Ryzen systems, the latency and available bandwidth for all connected components like the DRAM controller, PCIe bus, etc. is based off the Infinity Fabric speed (FCLK). All of this occurs in an interconnect AMD calls Infinity Fabric. The Infinity Fabric clock speed (FCLK) is configurable and directly relates to the memory clock (MCLK). For example in Ryzen 3000 CPUs, most will run a 1:1 ratio between FCLK and MCLK, which can be considered synchronous operation, up to 1,800MHz.

There may be instances where the FCLK may be set to operate in an asynchronous mode (not a 1:1 ratio), which may introduce increased latency, thus negating any performance benefit. However, for extremely high MCLK values (>3,600MHz), asynchronous operation may actually increase overall performance, at the cost of stability.

The physical clock signal that governs this data transfer, however, is 2500 MHz at the advertised speed – the data rate is double the physical clock, hence the name Double Data Rate. In AMD’s language this physical clock is called MEMCLK, and often shows up in bios settings under this name. MEMCLK is important because of how FCLK and UCLK relate to it.

All three of these clocks are set in a 1:1:1 ratio and are configured based on the memory speeds of the given system, and it is up to the end user to configure these values for best system performance.

Technically, all of these elements have always existed on all AMD’s Zen-based processors, back to 1st generation Ryzen and the enterprise equivalents, but FCLK and UCLK were always locked to MEMCLK making them effectively one and the same. What differs with 3rd generation Ryzen and beyond is that rather than being tied to MEMCLK, FCLK can now be set totally independently and UCLK has a choice of two ratios to MEMCLK – 1:1 and 1:2 (UCLK:MEMCLK). 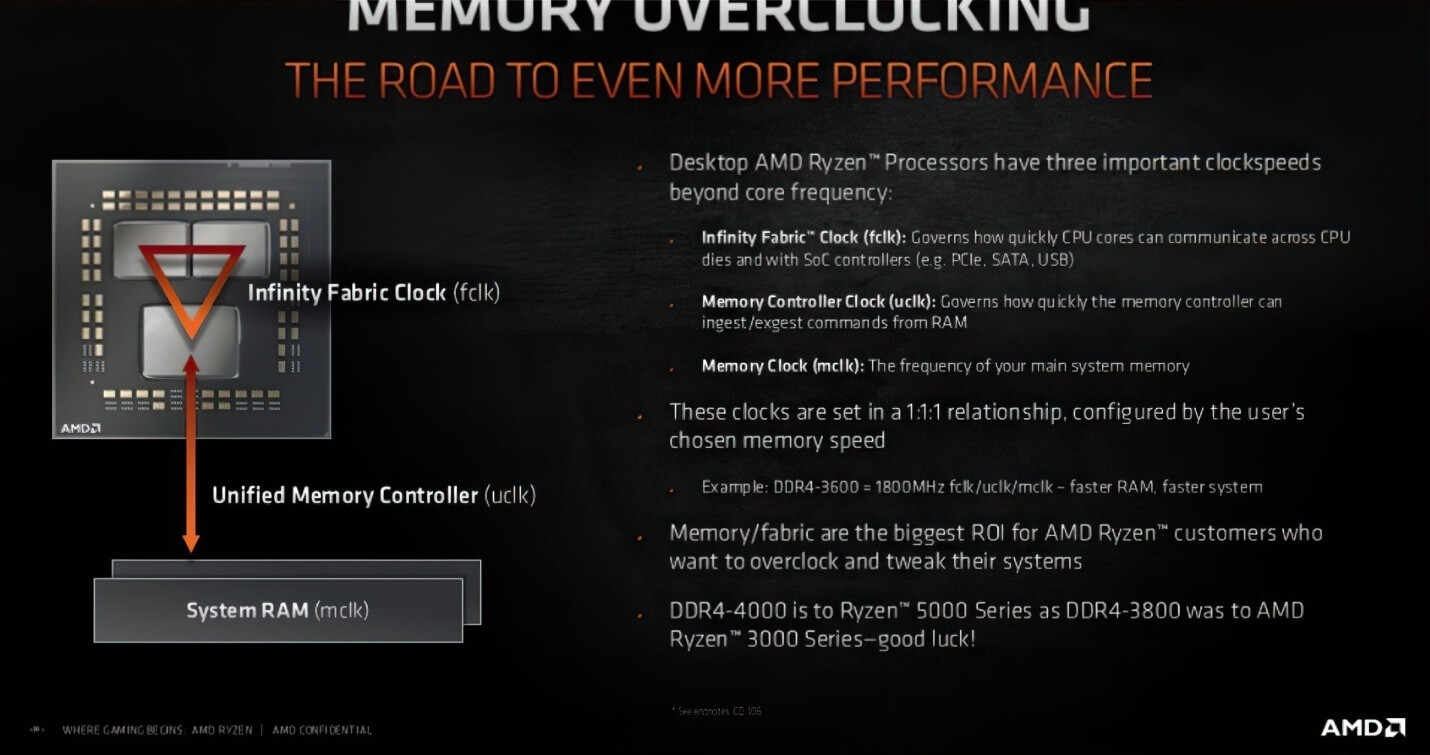 Although FCLK is now free to run at any speed, in practice there’s a performance bonus from running FCLK, UCLK and MEMCLK synchronized together.

At lower MEMCLK speeds this may be outweighed by overclocking/increasing FCLK independently, and when overclocking to very high MEMCLK it is simply no longer possible for FCLK to keep up, it must be run at a reduced speed.

AMD Ryzen owners now running DDR4-4000 RAM kits can expect much better performance and even higher overclocking capabilities when running a Vermeer Zen3-based desktop processor. The memory and fabric clock is very important and useful for users who want to overclock and tweak their Ryzen systems.

The leaked AMD slide details the following three memory related internal clocks that we already know, and I have also explained this before as well. These are: 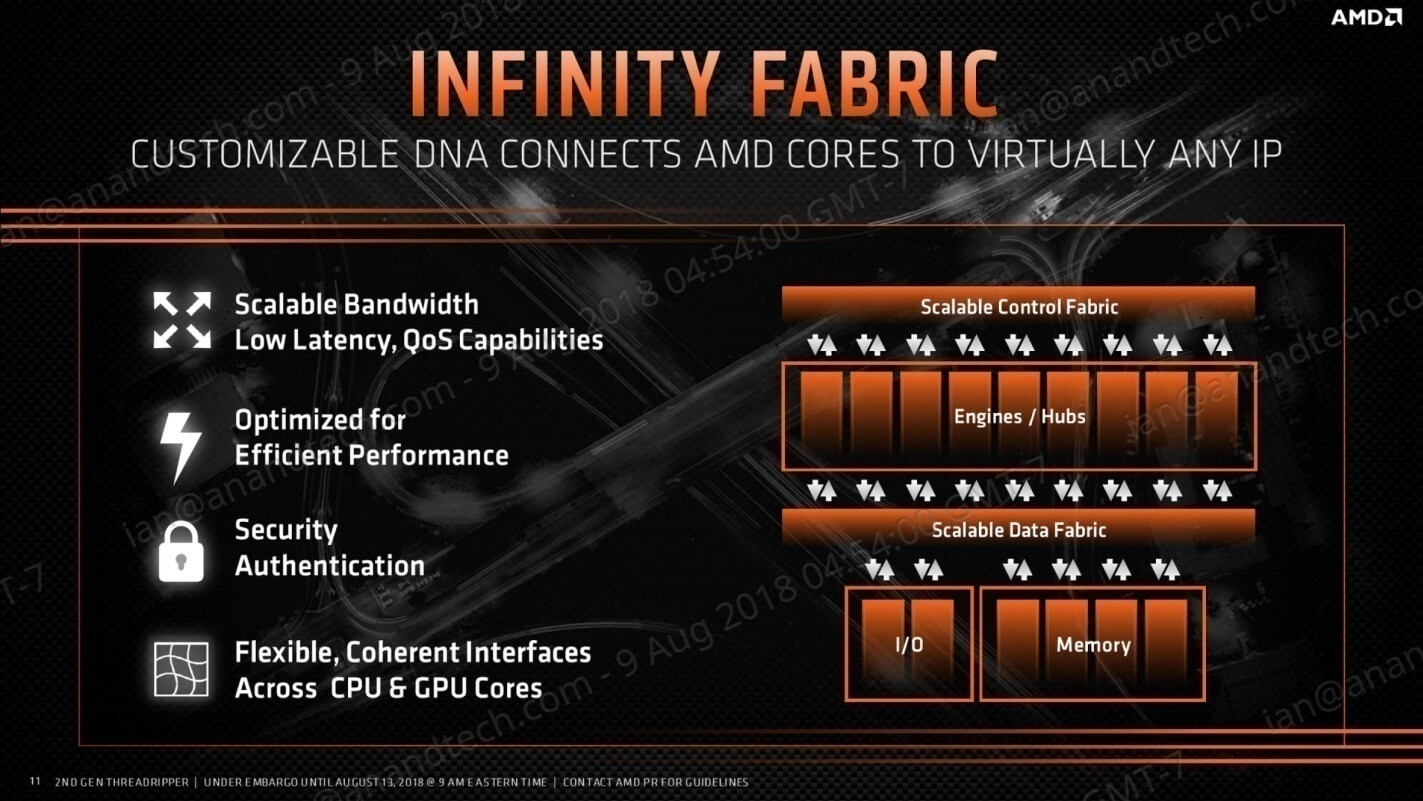