Recently some CineBench R20 (Single-Core) score entries have been spotted for these soon-to-be-released Zen3 processors. But do make a note that this particular CineBench R20 is a single-core benchmark test and it only uses one CPU core, so the amount of cores or hyper-threading ability doesn’t count.

Nonetheless, it still gives us an idea about the relative performance of any CPU. The CineBench R20 scores have surfaced on the website CPU-monkey, and the results look promising.  The chart shows the new Zen 3 CPUs stacked up against Intel’s lineup of processors, e.g. Tiger Lake and the Core i9-10900K/KF, Intel Core i9-10850K, and other processors. 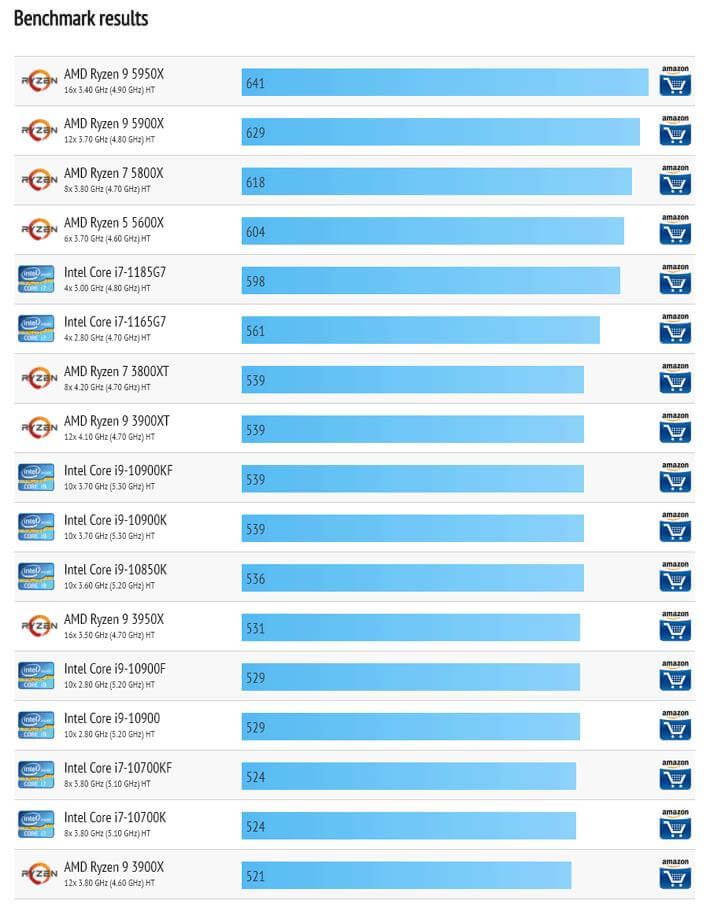 When looking at single-core scores, Cinebench offers an easy way to get a baseline comparison for applications that need fewer, more powerful cores, such as games and typically show off a CPU’s maximum single-core turbo frequency. This is why a CPU can have mediocre multi-core performance, but amazing single-core performance due to high boost clocks.

Cinebench R20 Single-Core scores are also important for game emulators like Dolphin, PCSX2, and Citra. All rely on a lower number of cores, sometimes even a single one. As a result, single-core performance is more important in those situations. Faster individual cores can also lend to making your system feel more fast and snappy.

Though, multi-core performance is also helpful and important for some of the applications.

Note that in the single threaded test, the power limits ultimately should not apply because one core should not consume all the power of the chip. AMD also shared their own Cinebench R20 scores at the Zen 3 reveal event, and the results almost match with these new entries/scores.

Here are two charts showing the CineBench R20 single-thread scores for some processors, courtesy of AnandTech.

Intel and AMD’s best processors have the following results in a single-threaded test, as tested by AnandTech:

Whichever way you slice it, whether you consider the lead a 17% lead from desktop-to-desktop, or a 6% lead from best-to-best, one thing is clear that if this result is correct, AMD will have the single threaded performance crown.”

“The AMD Ryzen Equipped to Win game bundle program is back with the highly anticipated next chapter in the Far Cry® series, Far Cry® 6. Customers who purchase an AMD Ryzen 9 5950X, AMD Ryzen 9 5900X, or AMD Ryzen 7 5800X processor between November 5th, 2020 and December 31st, 2020 will receive a complimentary copy of Far Cry® 6 Standard Edition – PC digital when released10.