Modders ‘NattyKathy’ and ‘tduality’ have released two new mods for Cyberpunk 2077 that attempt to increase the game’s traffic density. As such, and by using these mods, Night City can feel more lively, especially while driving.

Going into more details, NattyKathy’s mod increases spawn range slightly, pedestrian and vehicle density on foot, and adds more traffic in various “zones” of the city. Furthermore, it increases vehicle density while driving and lowers pedestrian density to claw back some CPU cycles.

In order to showcase these changes, the modder released the following comparison screenshots. These screenshots will give you an idea of what you can expect from this mod. 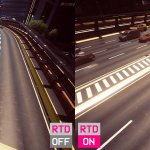 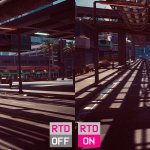 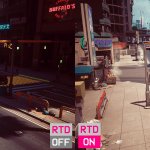 On the other hand, tduality’s mainly focuses on fixing the game’s “behind-your-back” crowd and cars density issues. In case you weren’t aware, the game lowers the crowd and traffic settings behind your back. As a result of that, the game feels empty the moment you look behind your back. Not only that, but tduality has added an optional version with 20% more cars.

You can download these mods from here and here. Do note that these mods are not compatible with each other.

Speaking of Cyberpunk 2077, we also suggest taking a look at these other mods. In theory, these mods should be compatible with the aforementioned ones. The Rebalance Megamod attempts to overhaul numerous aspects of the game, such as the AI, armors, perks, melee, player stats, weapons and more. There is also an enhanced Photo Mode Unlocker that you can download. Let’s also not forget the amazing Metro System Mod. Furthermore, this mod improves the game’s graphics by increasing the decoration LODs. You can also find 4K & 8K AI-upscaled textures for walls, roads, vegetation & more, and 4K textures for the body skins of all characters. And lastly, there is a mod that adds a flying mechanism to all cars, as well as these mods that unlock/introduce new explorable areas.