Modder ‘Willybach’ has released a brand new version of his HD Texture Pack for Valheim. This latest version of this pack comes with some 4K textures. Additionally, the modder offers three other versions of his pack that can run on weaker PC systems.

In case you weren’t aware, this mod uses AI techniques in order to overhaul the vanilla textures. The mod currently covers most biomes and most Building and Crafting textures. Furthermore, it has textures for almost all weapons and tools, and half of the creatures. What’s still missing from this HD Pack are armors, some creatures and animals, and Ocean and Mountain biomes.

The highest-quality version of this pack features an 8K texture for terrain and 4K terrain normal maps. This 8K texture is divided into 4x14. It also comes with 4K textures for ships, large rocks and all objects that are larger than player.

Below you can find an infographic detailing all available versions. 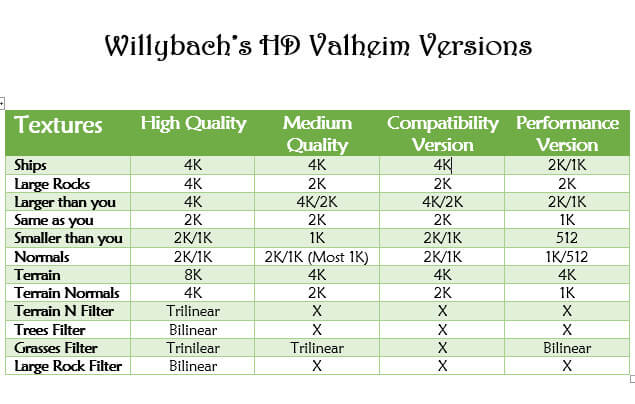 You can download Willybach’s HD Valheim from here. Below you can also find a video showcasing its latest version!