2020 was an awful year due to the COVID-19 pandemic. Thankfully, though, it was a great year for DSOGaming. DSOGaming has managed to increase its fanbase and reach, and we had more visitors in 2020 than we did in 2019.

As always, here are our annual stats for 2020. We’ve also included the Top25 countries. US and UK remain the top countries, followed by Canada, India and Germany. Needless to say that we wouldn’t be here without you, so thank you for the support. 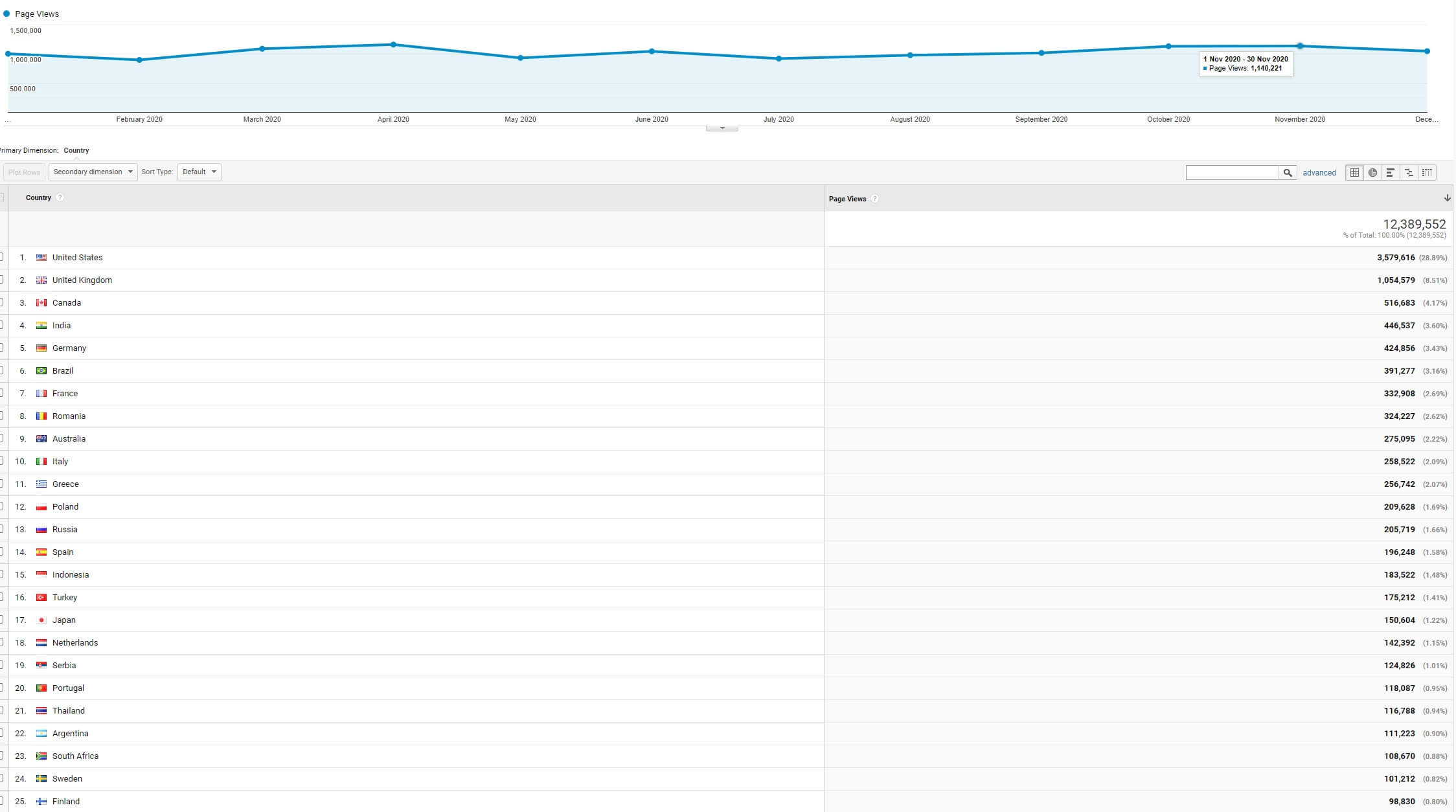 Now to some more interesting stuff. In 2021, we plan to get an AMD GPU (whenever the 6800XT or 6900XT becomes widely available). As you may have already seen, we got an RTX3080. We always prefer buying our own hardware, however, NVIDIA got in touch with us and sent us a Founder’s Edition, without any strings attached to it. That was a really media-friendly move from NVIDIA. And yes, we were shocked with what happened with HardwareUnboxed, especially since during that period we were in talks with NVIDIA.

Do also note that we’ll remain neutral and we won’t favour NVIDIA now that it sent us an RTX3080. I mean, you can clearly see that in our latest RTX3080 benchmark article, in which some people accused us of showing underwhelming results (when in fact this is how the RTX2080Ti and RTX3080 perform in the most demanding and unoptimized PC games. Numbers are numbers, they don’t lie. That article also wasn’t a review. However, we always want to see how a new GPU performs on the most demanding PC games. That’s one of the beauties of getting a new GPU; to test some older games that could not run well on previous GPUs).

Regarding our PC games coverage, we’ll do our best to bring you day-1 PC Performance Analysis articles. However, that’s not really up to us as some publishers may not provide us with early review codes. As always, and whenever that happens, we’ll be buying these games in order to cover them. For games using DLSS and Ray Tracing, we’ll keep having separate articles (like we had in 2020).

Regarding reviews, I’ve given complete freedom to our reviewers, without any restrictions or deadlines. That’s the least I can do as they are currently voluntarily contributing to the website. Currently, our active reviewers are Pieter, Stephen, Nick and Chris. Again, it’s been a tough year so I wholeheartedly understand if they don’t have enough time to review a game.

Regarding news, Nick (Metal Messiah) is doing a great job with the PC hardware news. Chris has been absent these past couple of months but again, it’s been a tough year for everyone. That’s why I’ve taken it upon myself to bring you lots of News articles (as well as the PC Performance Analysis articles). So yes, expect more Nude Mods in 2021… hopefully… probably… certainly.

As we’ve already said, we have a Patreon via which you can support us. Spencer, who is doing an excellent job at moderating our Discord server, also had a great idea. If you donate to our Patreon, you are eligible for a “Platinum Members” status, and you can notify the admins about it.

You can also support us by simply “spreading the word.” To be honest, that’s the best way you can support DSOGaming (excluding our Patreon campaign of course); by sharing our stories on Facebook, Twitter, Reddit and all other social media.

A lot of things also happened in the background that most of you don’t really know. For instance, we have removed all the ads from Disqus. We’ve also implemented AMP (and I want to give you a heads up that we might experiment with it in the future). Additionally, we’ve added a Dark Mode (that finally works correctly). We’ve also made our website faster to load.

All in all, we hope 2021 will be a great year. We’ll do our best to keep bringing you lots of News stories and articles (I mean, we’ve been working even on New Year’s Eve so yeah, we’re not going anywhere).  That’s what we’ll be focusing on; new content for you. So yeah, more mods, more UE4 remakes, more News stories, more Reshade videos, and more… booooooobs (*insert “Honest Trailer” voice). We may also try to bring new more interviews (again though, that’s up entirely to publishers/developers and since we’re asking tough questions, we are certain that most will decline us).

So, happy New Year everyone and stay safe and healthy!