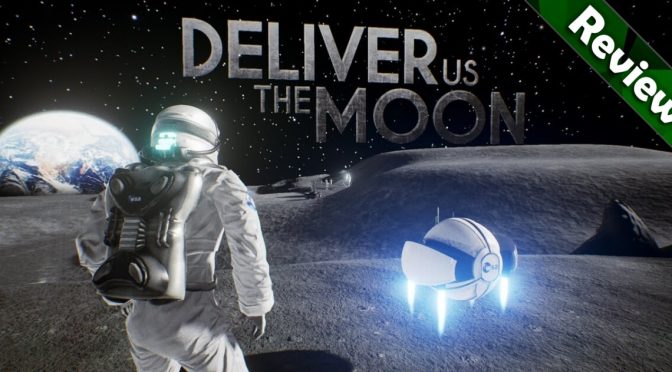 Did any of you ever want to become an astronaut? I didn’t, I am afraid of heights unfortunately. Still, if anyone ever had the wish then this might be the game for you. This is a completely linear game. Actually this could have been Isaac’s adventure from Dead Space but without the dead part. The story is OK, nothing really original but what is lately? Basically you are humanity’s last chance for survival, as usual. Your mission is to investigate the loss of communication with the lunar base which is responsible for supplying power back to earth since humanity has exhausted all available power resources.

I was almost certain the main screen music was going to be the song “Fly me to the moon.” Sadly it is not, but do not worry since the music score is quite pleasant. As you can imagine the music is atmospheric and blends in quite nicely with the game however the sound effects, on the other hand, are not that great and are just OK.

The visuals for an indie game are fine, with some segments that can impress and some others that will disappoint. The weird thing is the main character’s model that looks mediocre at best compared with the rest of the game graphics. I imagine this is because the game changes perspectives from first to third person between sections and probably they didn’t include this until recently. I honestly did not like the transitions, I would much rather preferred playing the whole game in first person.

Performance wise the game runs like a one legged pirate on hunger strike. It is severely unoptimized to the point the game becomes unplayable in some specific parts like the driving sections. I have seen the frames varied from 15 to 120. This can be a serious problem for users that want rock solid 60fps, and to be honest the visuals do not justify the performance, especially when it is a PC-only title.

One thing I really dislike in games these days is the silent protagonist. I do get it in games like sandbox RPGs, it helps with immersion and role-playing but in this game it doesn’t enhance the overall experience, it does the exact opposite.

There are some puzzles in the game which I kinda enjoyed even if I am not a big fan, but they seem to fit in the game world quite nicely. Somewhere in the middle of the game you get a little drone thingy named ACE that will help you overcome some difficulties.

I love it when games do not lock you in menu screens in order to read or listen collected information during gameplay. Same goes when audio logs can be played during gameplay. But I do hate timers, especially in these kind of games.

The checkpoint saving system is not perfect and sometimes is actually tiresome. In some parts if you die or fail you will have to replay the whole sequence from the beginning. I am not a fan of story driven games that do that, replaying the same section again and again destroys the flow of the game. If it was a skilled based game that would make sense, but in the specific game it sucks and if any of you played Outlast 2 you will understand exactly what I am saying, unless of course you never died so in that case forget what I just said.

This is not a lengthy game, it is about three hours depending on how much time you spend with puzzles and set-pieces.  Three hours for twenty dollars is not exactly value for money, though there are some games that do deserve the price however I don’t think this is one of them; at least not right now, so waiting for some patches might be the safest option. Also keep in mind that there is no proper ending since they announced a DLC that will continue the story.  Overall the game is above average and I did indeed have fun with it, but it has some problems which plague the game making some parts almost unbearable; at least in my experience.