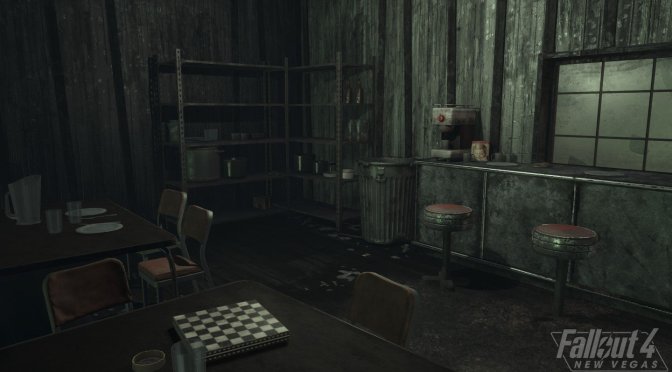 The team behind the Fallout 4 New Vegas project has released a new set of screenshots for it. These screenshots showcase the NCR Ranger Safehouse which will be featured in this total conversion mod.

Until Fallout 4 New Vegas comes out, we suggest taking a look at these other mods for Fallout 4.  Whispering Hills is a cool Silent Hill mod and The Wilderness Mod adds a worldplace that is as big as Nuka World. Moreover, Fallout 4: Sim Settlements 2 Chapter 2 adds new quests and a game mode. Furthermore, this mod aims to overhaul the AI of the NPCs. There is also a 3.7GB Mod that adds 14 different weapons. Not only that, but the Galac-Tac Mercs and Music Mod is yet another DLC-sized expansion that features 30 new quests. Lets’ also not forget this mod that adds an unofficial Photo Mode. Obscurum IV – Statesec Mod adds a new game world with new enemies and weapons. And lastly, this mod adds new creatures, world bosses and crafting recipes.