The team behind the upcoming Half Life 3 fan project, Project Borealis, has released the first screenshots from it, showcasing some of the in-game models. Below you will find the 3D models for Gordon’s HEV Suit Arm, the shotgun, the gravity gun (this is still a WIP model) and the Strider.

The Strider, in particular, looks amazing and highly detailed. Alongside the HEV Suit Arm, these models show the dedication of this team to this project.

Project Borealis is based on Marc Laidlaw’s Epistle 3 story, though it will feature more and new story bits in order to fill the gaps and flesh out a full and compelling story true to the lore and feel of the Half Life universe.

Project Borealish will be using the Unreal Engine 4 and the team will release more details, information, and screenshots in 2018. Until then, enjoy the following screenshots! 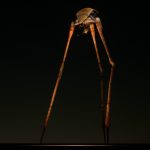