Focus Home Interactive has released the sequel to Deck13’s Souls-like game, The Surge 2. The Surge 2 is using the FLEDGE Engine and the Vulkan API. As such, it’s time to benchmark this title and see how it performs on the PC platform. 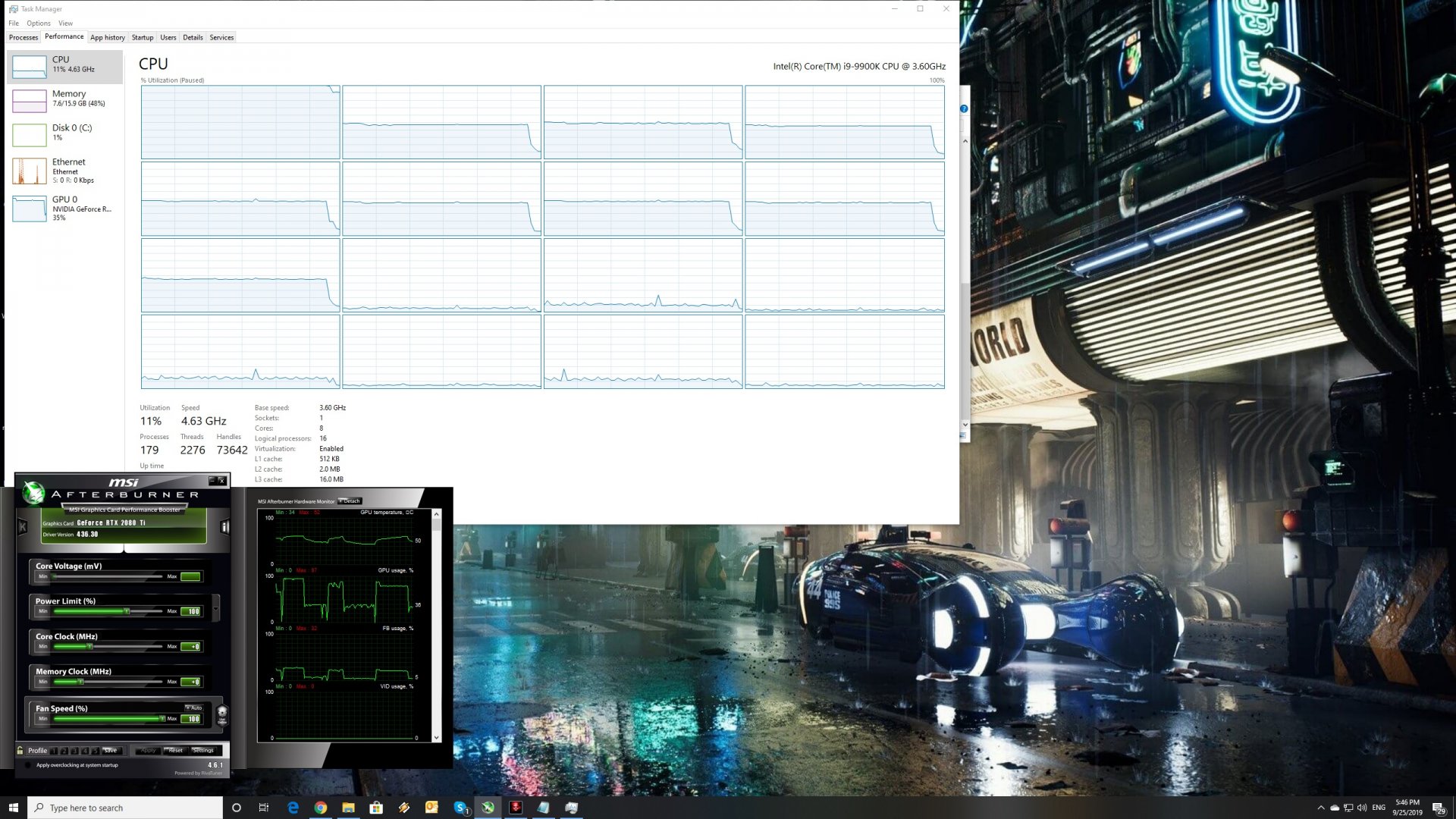 Deck13 has added a few graphics settings to tweak. PC gamers can adjust the quality of Textures, Shadows, Volumetric Lighting and Anti-aliasing. There are also options for Chromatic Aberration, Motion Blur, Ambient Occlusion, Subsurface Scattering, Bloom and Lensflares. The game also comes with a Field of View slider, resolution scaler, and lets you set your in-game framerate. The Surge 2 does not feature an unlocked framerate, though you can set it to 30, 50, 60, 75, 90, 120, 144, or 160. Still, you can edit the game’s Settings.ini file and set your max_frame_rate to whatever value you want.

In order to find out how the game scales on multiple CPU threads, we simulated a dual-core, a quad-core and a hexa-core CPU. Unfortunately, and despite using the Vulkan API, The Surge 2 mainly uses one single core/threads. As such, those with older CPUs may encounter performance issues, even on really low resolutions. On the other hand, those with newer dual-core CPUs will be able to enjoy the game without any performance issues. 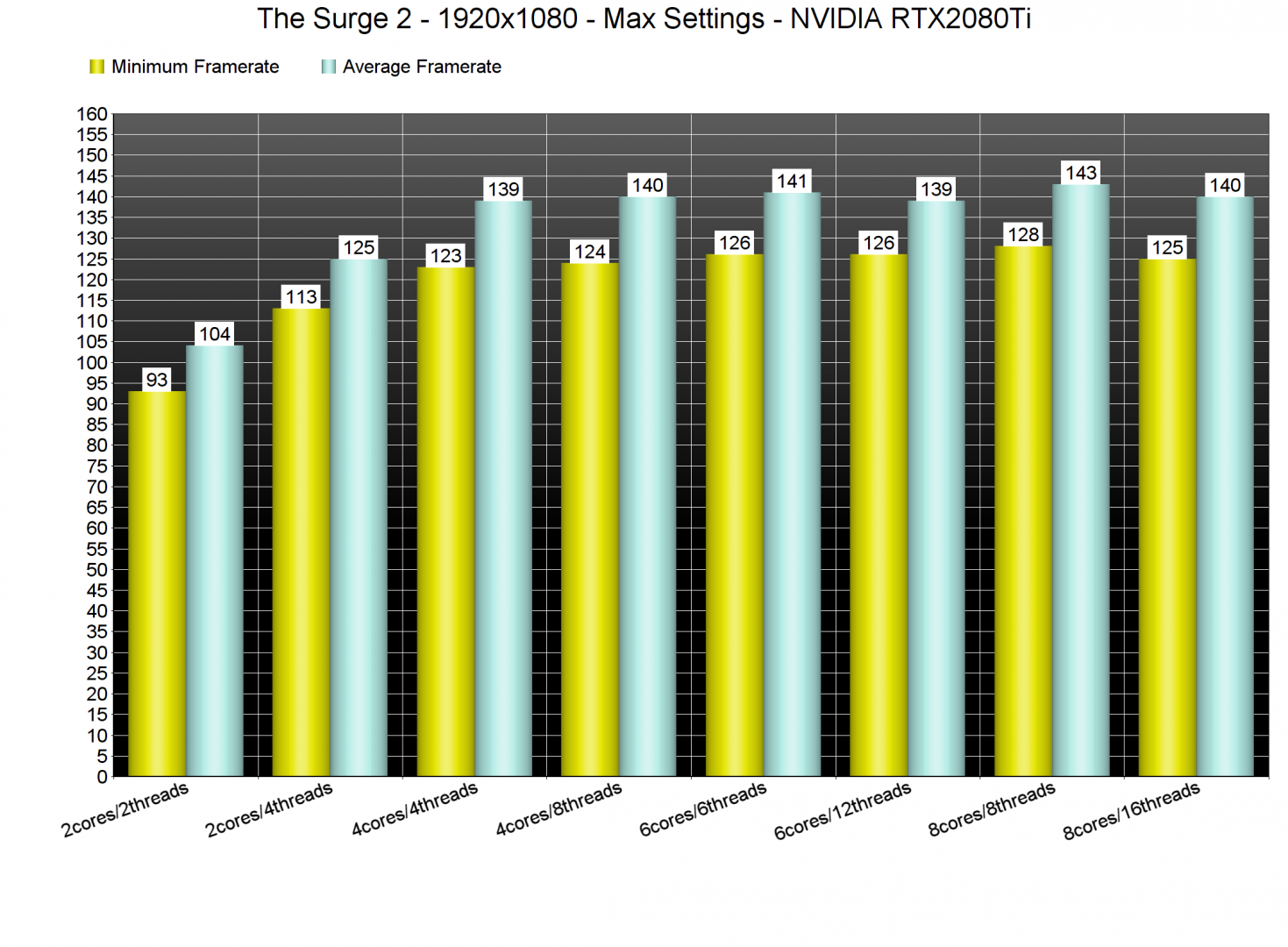 Due to its single-threaded nature, the game under-performed on our Intel i7 4930K. The good news here is that this older CPU was able to push a constant 60fps experience. The bad news is that we were severely limited by our system, even at 2560×1440. Deck13 will have to further optimize its title for older CPUs as the game is simply unable – at this point – to properly use those extra CPU cores/threads. To be honest, this reminded me the single-threaded issues of Forza Horizon 3 and Halo Wars 2, so hopefully Deck13 will release a post-launch performance patch. 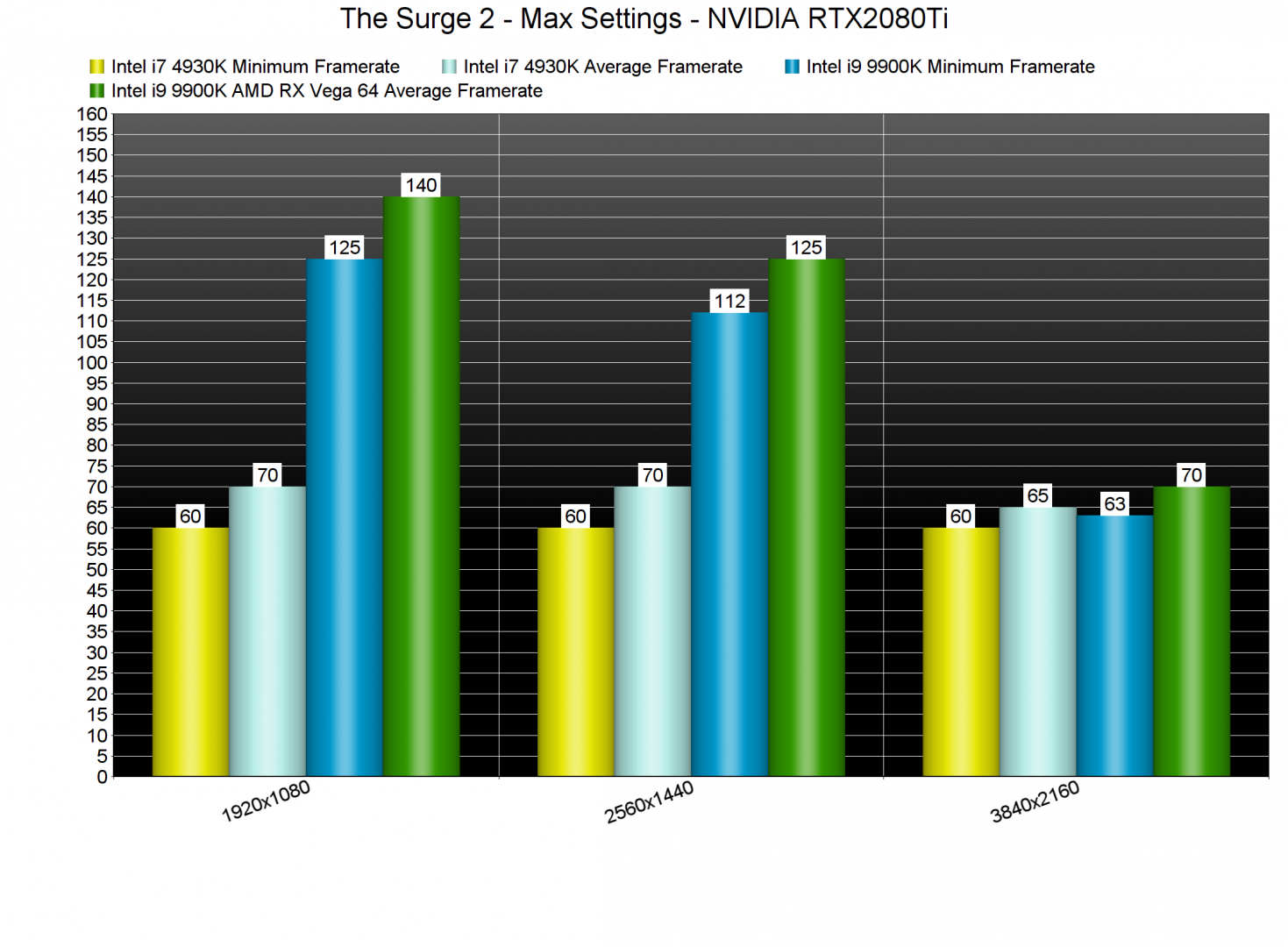 Regarding its GPU requirements, The Surge 2 can run with 60fps on a variety of graphics cards at 1080p/Max settings. Our AMD Radeon RX580 came close to a 60fps experience. On the other hand, our NVIDIA GTX980Ti, RTX2080Ti and AMD Radeon RX Vega 64 had no trouble at all running the game. 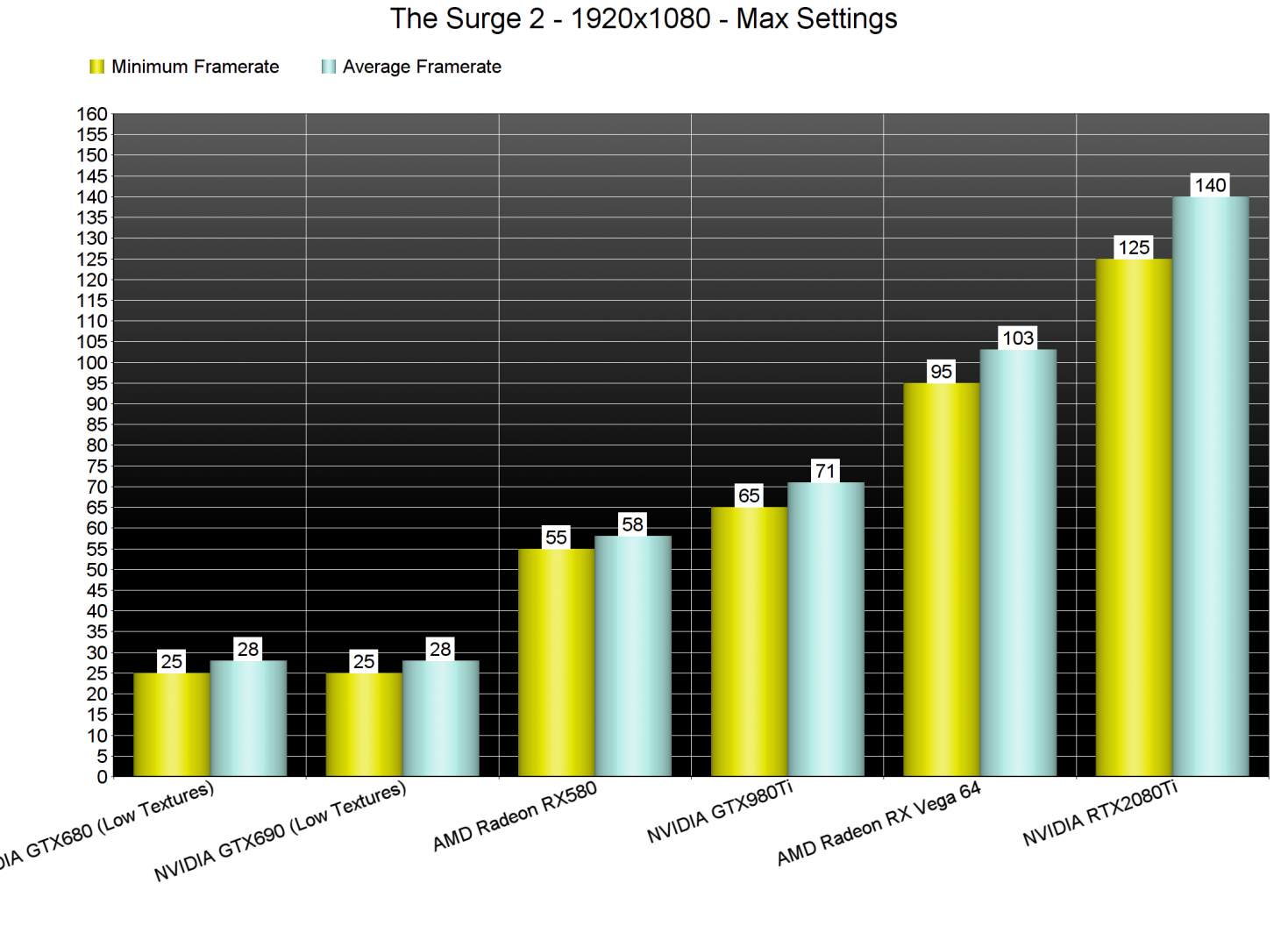 At 2560×1440, all of our top three GPUs were able to offer a 60fps experience. There were some minor drops below 55fps on our GTX980Ti, but for the most part that GPU was also able to maintain framerates above that threshold. In 4K, the only GPU that was able to run the game with 60fps was the NVIDIA RTX2080Ti. 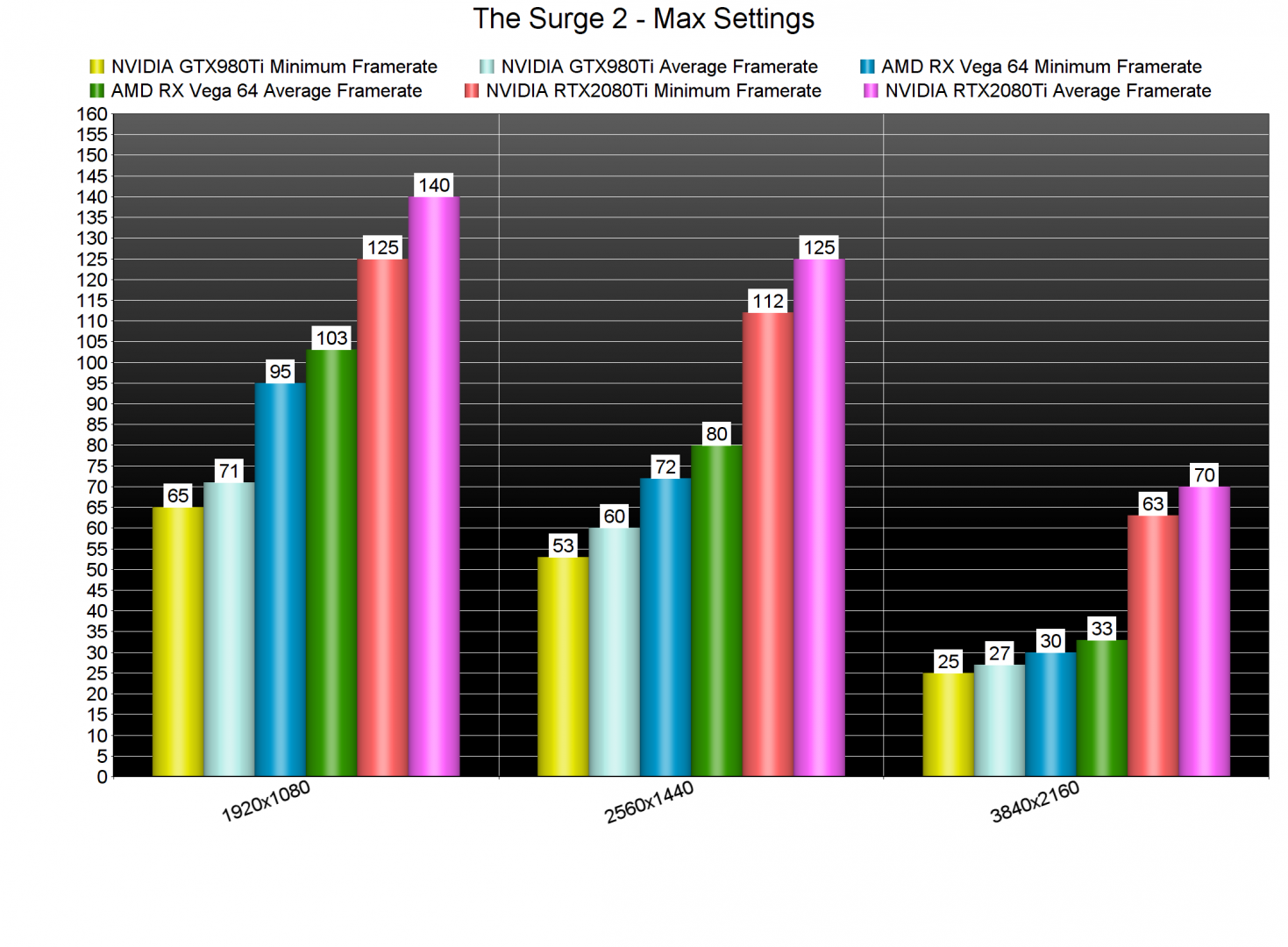 Now while a lot of GPUs can run The Surge 2 with 60fps, the game does not feel smooth. We seriously don’t know what is going on here, however we did notice some awful framepacing issues in 4K. At 1440p and with its really high framerate, the game was smooth on the RTX2080Ti. These framepacing issues affect both NVIDIA’s and AMD’s hardware. So yeah, while you can maintain a 60fps experience, the game feels sluggish and choppy. Moreover, some animations for various effects are locked to 30fps, and the game was locking our framerate to 60fps each and every time we were launching it (we had to constantly change our refresh rate in order to address this issue/bug).

Graphics wise, we weren’t really impressed by the game’s visuals. Its art style looks kind of cool and you can dismember your opponents, however there is nothing standing out. Most of the characters are nowhere close to what modern-day triple-A games offer, and there are numerous “invisible walls.” While The Surge 2 is not a bad looking game mind you, it just doesn’t offer anything mind-blowing.

All in all, The Surge 2 currently suffers from a number of optimization issues. The game mainly uses one CPU core/thread, and those with older CPUs may encounter performance issues. It also does not take advantage of more than four CPU cores. Not only that, but the game feels choppy even at 60fps, something that will put off a lot of PC gamers. Let’s hope that Deck13 will address some of these issues via a post-launch performance patch.