Splinter Cell: Blacklist has just been released, so it’s time to see whether Ubisoft has learner its lesson with Assassin’s Creed III PC or not. And we are happy to report that Blacklist performs better than most triple-A titles. Truth be told, the game is based on Unreal Engine 2.5 (yeah, you read that right. It’s not even UE3). However, Ubisoft has managed to optimize its title better than any other title and as a result of that, we finally see a performance difference between tri-cores and quad-cores. To be honest, Blacklist may be one of the few games – at this point – that benefits from quad-core CPUs, so kudos to the French company.

As always, we used an overclocked Q9650 (4Ghz) with 4GB RAM, an Nvidia GTX 690, the latest version of the GeForce drivers and Windows 7-64Bit. Nvidia has already included an SLI profile for Ubisoft’s title, however most of you will need to either use the GeForce Experience in order to update the game’s profile or activate SLI manually via Nvidia Inspector Tool. In case you have not installed the GeForce Experience program, all you need to do is open Nvidia Inspector Tool, browse the available profiles, find Splinter Cell: Blacklist, and add the game’s executable filename “Blacklist_DX11_game.exe”. After doing that, SLI should be working. 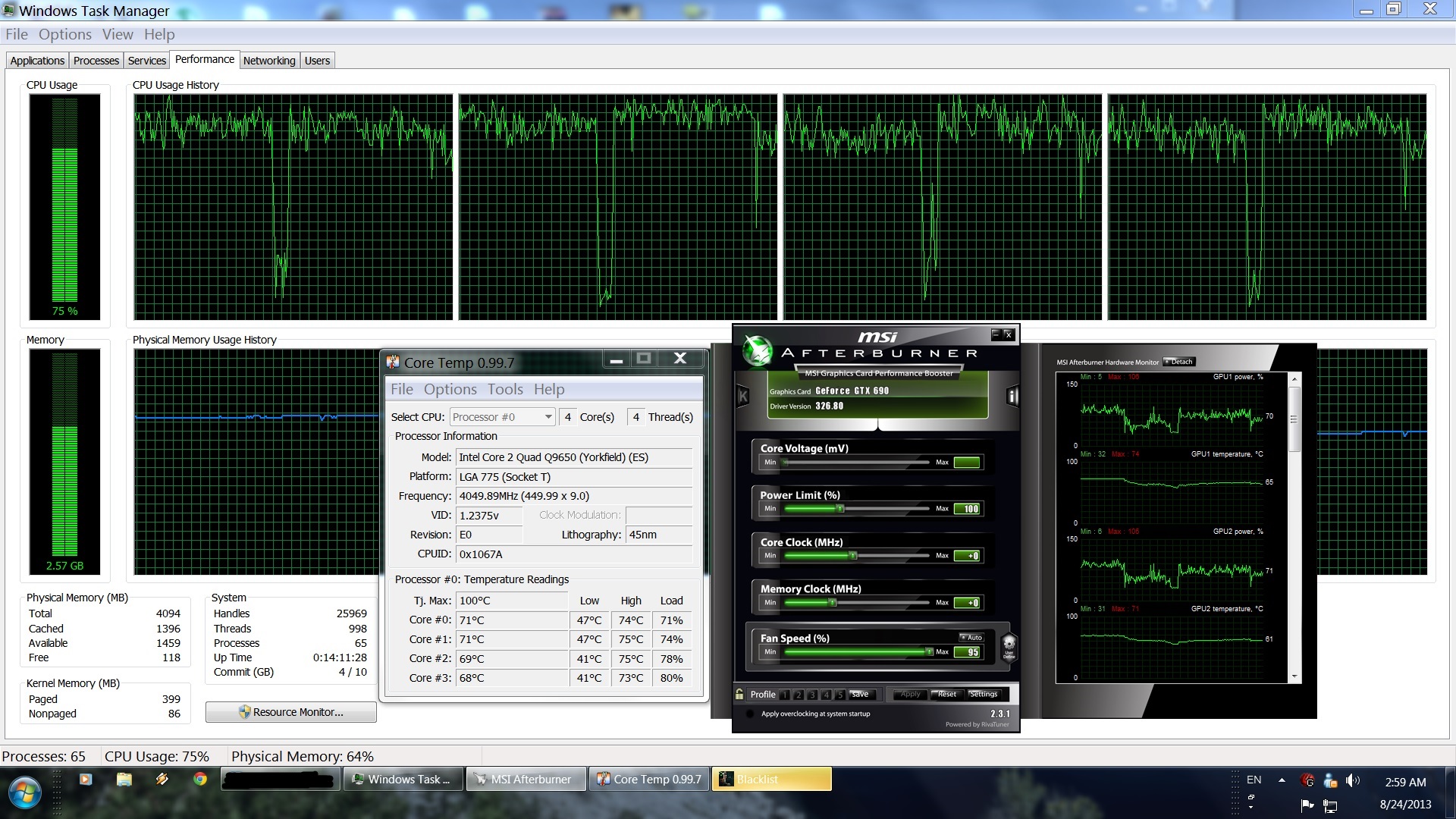 Splinter Cell: Blacklist is both a CPU and a GPU bound title. A dual-core is unable to maintain a constant 60fps experience, meaning that you will need at least a tri-core CPU. Thankfully, a tri-core Intel CPU (there isn’t any but you can at least get an idea of how the game runs on such a system) is able to maintain a 50-60fps (provided the system is not limited by the GPU). A proper quad-core system (at 4Ghz), on the other hand, can run the game without any performance issues. And in case you’re wondering, the difference between a dual-core and a quad-core system is around 30fps. Moreover, the difference between a tri-core and a quad-core system is around 7-10fps, meaning that Blacklist is definitely taking advantage of quad-cores. As said and before, Blacklist is perhaps one of the few titles that benefit from quad-cores, and we have to admit that we were impressed by it. Let’s not forget that both Conviction and Assassin’s Creed III had major performance issues on most PC systems. Contrary to those titles, though, Blacklist proves that we were right all along and that Ubisoft is currently willing to take advantage of PCs. In short, good news for everyone as Watch Dogs will – most likely – be optimized for quad-cores as Blacklist is.

As said, Blacklist also requires a high-end GPU to shine. A single GTX680 is unable to maintain a constant 100fps experience, however it’s able to push 60fps at all times (1080p with max DX11 details and FXAA). Naturally, if you want to eliminate jaggies and use higher levels of AA (or downsample from a higher resolution) you will need a Titan card or an SLI system. We’ve also experimented with the graphics settings that are currently available. Dynamic Ambient Occlusion brings a 25-30fps hit, while tessellation brings a 10fps hit each. Similarly to tessellation, parallax occlusion mapping also brings a 8-10fps hit. This means that those with weaker graphics cards will have to either select a lower value under Dynamic Ambient Occlusion (its lowest offer brings a 7-10fps hit) or disable all of the aforementioned graphical settings. 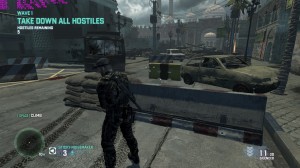 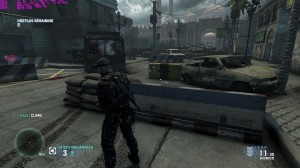 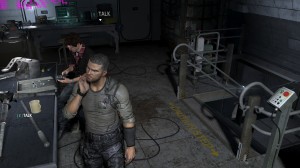 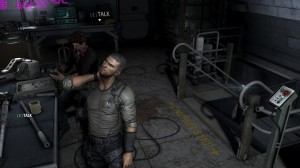 Splinter Cell: Blacklist supports various forms of AA. PC gamers can choose between FXAA, SSAA, MSAA and TXAA (the last one is only available to Nvidia users, and only when the game is running in Single GPU mode as the game’s profile has some issues with it). Nvidia and Ubisoft need to address this bug as the highest levels of AA are only possible on SLI systems, unless of course you are willing to experience the game the console way (in other words, with a really low framerate). Naturally, the best AA form is SSAA 2×2, however we strongly advise you downsampling the game from a higher resolution (such as 3200×1800). By doing that, you will save resources and you will get a slightly crisper image.

Graphics wise, Splinter Cell: Blacklist looks great. Ubisoft has used lots of high resolution textures, though you will be able to spot some low-res here and there. The game’s lighting is great, though there are some light sources that do not cast shadows. To be honest, this is something we were expecting, and this is where ambient occlusion does wonders. There is also support for every annoying modern effect (such as anamorphic and abstract lens flares). What disappointed us with Blacklist were some character models. Although Sam’s and Briggs’ models are great, Grim looks awful (especially her hair) and Charlie Cole looks as ‘fake’ as it can get.

Overall, we were really impressed with Splinter Cell: Blacklist. Blacklist is among the few that benefits from quad-cores, and runs better – while looking even better – than its predecessor. It’s a step towards the right direction, so kudos to Ubisoft for finally learning their lesson. Splinter Cell: Blacklist will also stress today’s GPUs. Thankfully, PC gamers can lower some settings in order to enjoy it. Not only that, but the game’s levels have been designed in such a way that offer both stealth and assault approaches. In short, Blacklist can be played just like the Splinter Cell games you loved. And that’s a great thing.

Enjoy (all screenshots were take under single GPU mode as FRAPS and MSI Afterburner were not working under SLI)! 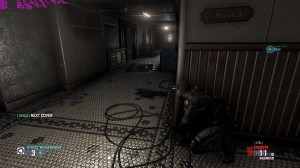 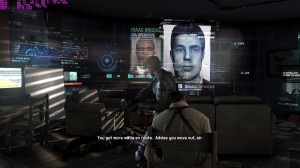 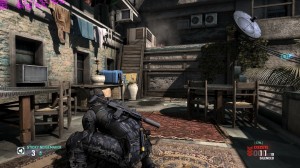 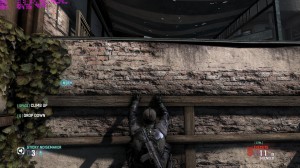 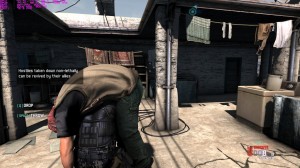 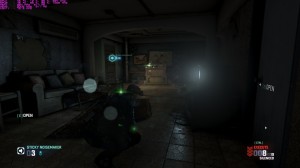 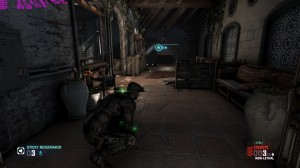 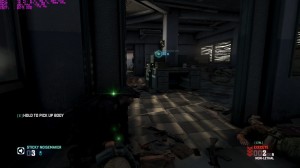