Sniper Elite 3 has just been released and Rebellion was kind enough to provide us with a review code, so it’s time to see how this new shooter performs on the PC platform. Sniper Elite 3 is powered by the next iteration of Rebellion’s in-house engine, the Asura engine. Asura engine was also used in Sniper Elite V2; a game that performed amazingly well even on older PC systems. And as you’d expect, Sniper Elite 3 is even more optimized than its predecessor.

For this Performance Analysis, we used an i7 4930K with 8GB RAM, Nvidia’s GTX690, Windows 8.1 64Bit and the latest version of the GeForce drivers. Back in the Sniper Elite V2 days, Nvidia had a lot of trouble with the game’s SLI performance. SLI owners were forced – at least for the first couple of days – to disable SLI as it brought negative SLI scaling. Thankfully, it appears that Nvidia has learned its lesson. The green team has already included an official SLI profile that offers amazing scaling, so kudos to both them and Rebellion.

As we’ve already said, Sniper Elite 3 is better optimized than its predecessor. Sniper Elite 3 is – like Sniper Elite V2 – a GPU-bound title. As we can see below, even a dual-core CPU is more than enough for an ‘120fps’ gaming experience (provided you are not GPU limited). In order to avoid any possible GPU limitation, we lowered our resolution and completely disabled AA. Still, we kept all settings on Ultra as some of them may bring further burden on the CPU. Contrary to Sniper Elite V2, this time around there are performance differences between dualcores, tricores and quadcores. Hell, the game even benefits from pentacores, something that really surprised us. Do note that Sniper Elite 3 will also take advantage of AMD’s Mantle, though there is no day-one support for it (it will come via a future update). In short, Sniper Elite 3 scales incredibly well on multi-core CPUs and will run with no trouble even on dated systems.

Rebellion has included a variety of graphics options to adjust, and there is also an option to reduce mouse acceleration and smoothing. As you’d expect, there are proper keyboard indicators on-screen and the game plays wonderfully with the keyboard+mouse combo. PC gamers can adjust the quality of Textures, Shadows, Anti-Aliasing and Anisotropic Filtering. For high-end GPUs, Rebellion has also included a Supersampling option (that is obviously demanding on max values). Moreover, players can enable/disable Motion Blur, Ambient Occlusion, V-Sync, Tessellation and Obscurance Fields. 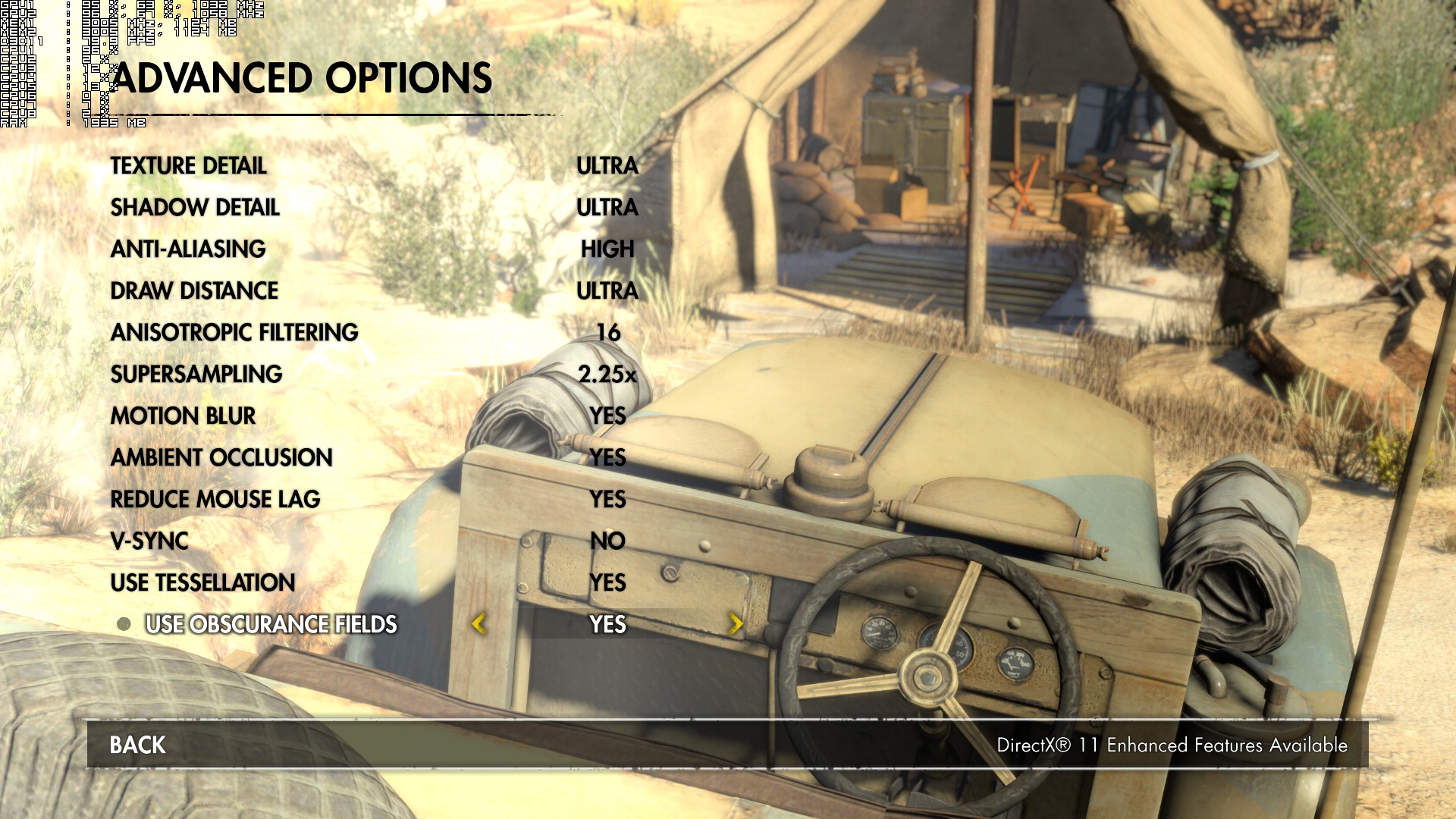 Graphics wise, Sniper Elite 3 looks great. Rebellion has used a lot of high-resolution textures but what really amazed us was the fact that every light source cast shadows. In such stealthy games, shadows are of a high priority and thankfully Rebellion has implemented a fully dynamic lighting system. There will be occasions when your character will cast two different shadows (due to the nearby light sources), something that you’ll have to keep in mind while approaching your enemies. Moreover, there are some amazing God-rays, soft-particles have been implemented, ambient occlusion does a great job, and the X-Ray slow-motion moments are gorgeous.

Unfortunately, though, Sniper Elite 3 suffers from major pop-in issues, something that is easily noticeable when using your binoculars or your sniper’s scope. Not only that, but the shadows from the trees feel kind of ‘low-res’ and ‘messy’, and there are also some shadow flickers on distant objects. Oh, and contrary to the Splinter Cell series, in Sniper Elite 3 you cannot destroy lamps in order to create new hideouts.

Regarding its GPU requirements, PC gamers will need a high-end GPU in order to enjoy Sniper Elite 3 on max settings, even if they have paired it with an older CPU. Our GTX690 was being pushed to its limits (while still maintaining a constant 60fps experience) at 1080p with max settings and 2.25X Supersampling. There were occasions when the framerate dropped to 61fps, though our average framerate was around 80-90fps. A single GTX680 is simply not enough to handle Supersampling, meaning that owners of weaker GPUs will have to reduce or disable some graphical options. 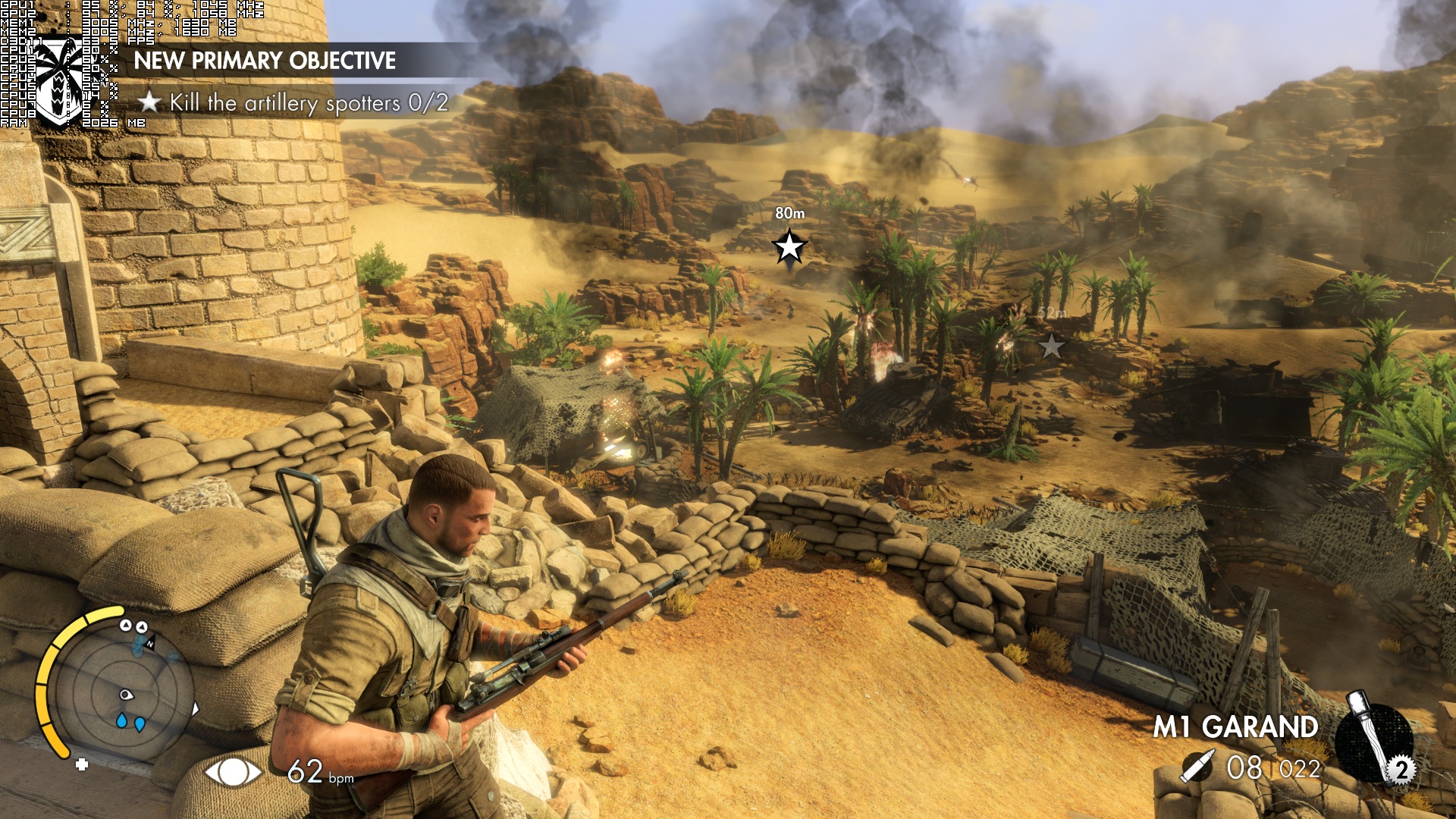 All in all, Sniper Elite 3 performs amazingly well on the PC. Rebellion did an excellent work and Nvidia has not dropped the SLI ball on this one. While the game does require a high-end GPU to shine, it comes with a fully dynamic lighting system that will be appreciated by all those who got bored with all the pre-baked shadows that have plagued most triple-A games lately. Not only that, but the game’s CPU requirements are as low as they can get, meaning that a lot of gamers will be able to enjoy this latest Sniper Elite title. 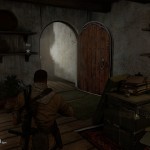 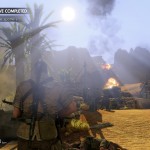 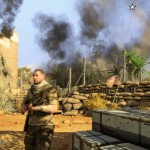 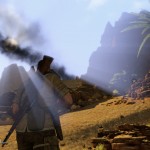 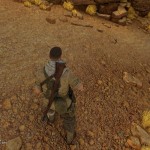 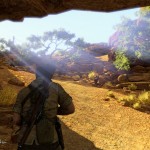 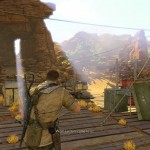 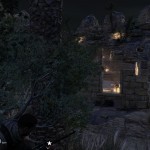 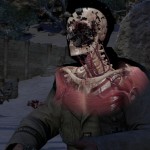 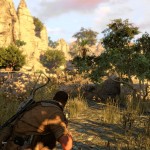