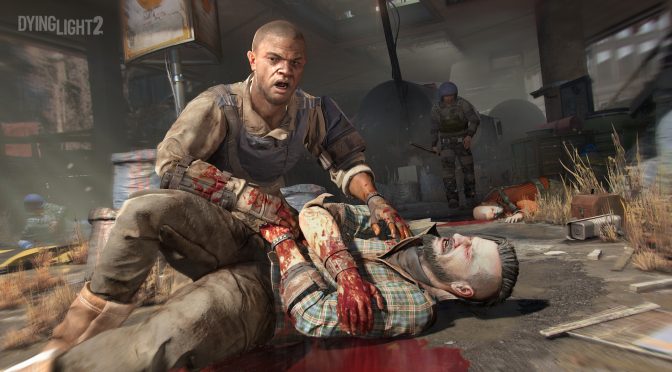 Dying Light 2: Stay Human releases this Friday and Techland has provided us with a review code. And, since the game supports both AMD FSR and NVIDIA DLSS (as well as Ray Tracing), we’ve decided to first benchmark these features.

Dying Light 2 does not feature any built-in benchmark tool. As such, and for these particular benchmarks, we’ve benchmarked the starting area.

Below you can find some comparison screenshots between Native 4K (left), NVIDIA DLSS Quality (middle) and AMD FSR Quality (right). AMD FSR Quality is noticeably blurrier than the native resolution. On the other hand, NVIDIA DLSS currently suffers from some ghosting issues whenever you stop moving the camera. Due to these issues, the game also looks on par with AMD FSR. This is a damn shame because DLSS does actually re-construct some distant objects (that AMD FSR does not). We’ve already informed NVIDIA about these issues, and the company is aware of them. The green team told us that the DLSS implementation is currently bugged and that it’s working on a fix for the launch version of the game. We’ll be sure to re-test DLSS once the game comes out and update this article. 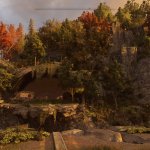 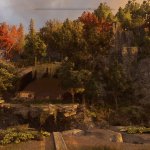 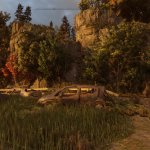 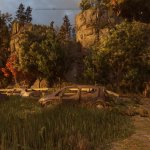 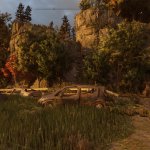 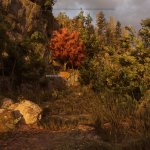 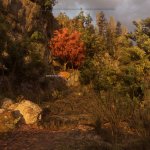 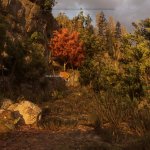 Performance-wise, AMD FSR Quality is slightly faster than NVIDIA DLSS Quality. This is to be expected of course as FSR Quality renders at a lower resolution than DLSS Quality. Strangely enough, the game does not offer any Ultra Quality mode for AMD FSR. 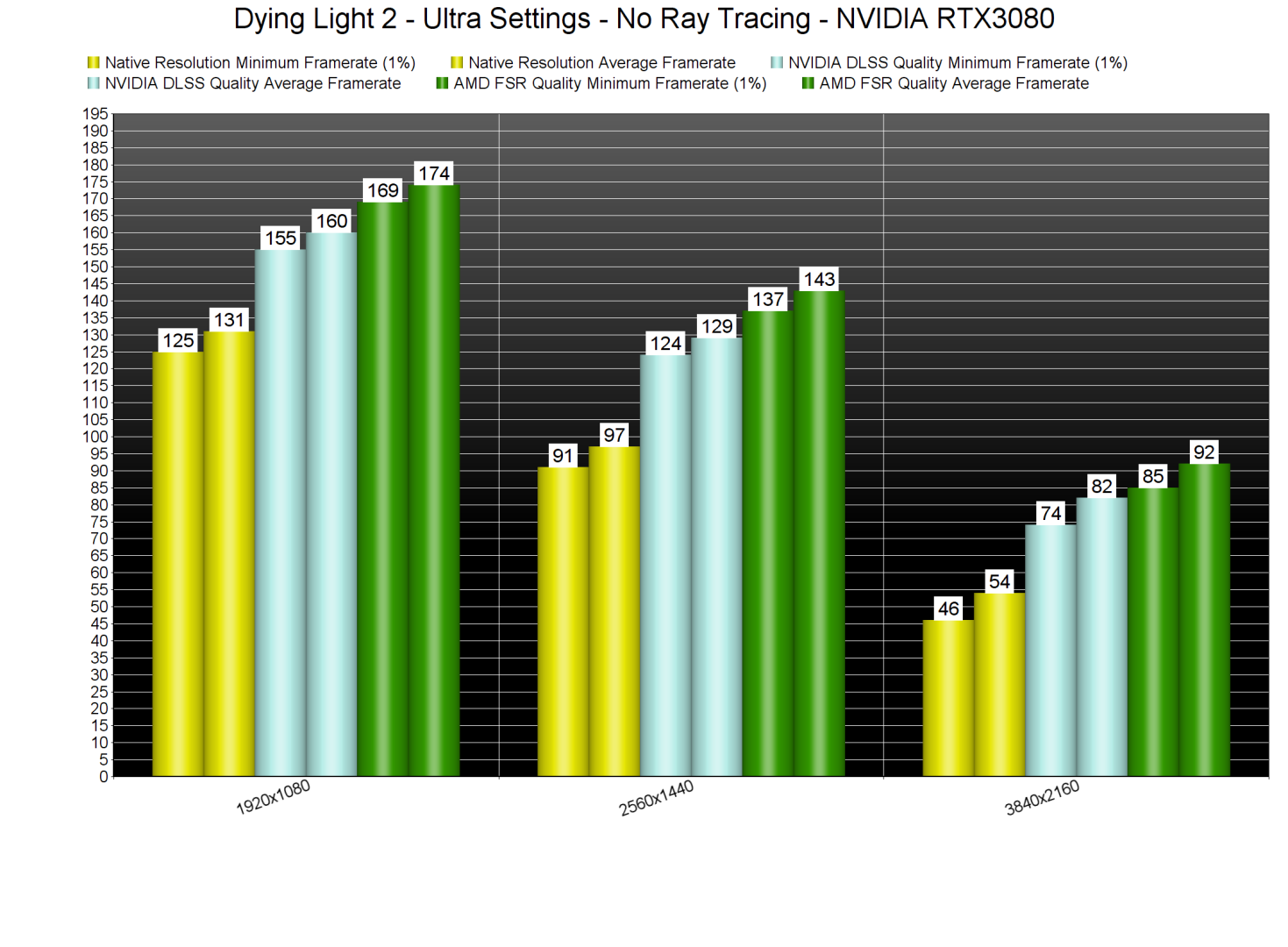 Dying Light 2 supports ray-traced reflections, global illumination, ambient occlusion and shadows. And, we have some good and some bad news. The bad news is that Ray Tracing can sometimes result in some weird results. Take for example the first comparison and look at the tunnel. As you can clearly see, the lighting is messed up. In the RT screenshot, the lighting/ambient occlusion falls back to the rasterized version at the middle of the tunnel. This is most likely due to the limited distance that the rays travel in this game. And, unfortunately, this can result in some inconsistent visuals. Thankfully, though, there aren’t a lot of scenes that have this issue. Still, this is something most of you should be aware of.

In most cases, Ray Tracing can greatly improve the visuals of the game. And, contrary to other titles, you can immediately notice these graphical improvements. In fact, some scenes can have a next-gen jump over their rasterized versions. Take for instance the last comparison screenshot. The visual improvements are so dramatic that the rasterized version feels more like the game running at “Medium/Low” settings. Below you can find some comparison screenshots, rendered in native 4K (Ray Tracing is on the left and the rasterized version is on the right).

Ray Tracing in Dying Light 2 comes with a major performance hit. This is to be expected as Dying Light 2 uses Ray Tracing for multiple effects. Nevertheless, PC gamers will definitely need an NVIDIA RTX GPU (good luck running the game with AMD’s GPUs).

Our RTX3080 was unable to offer a constant 60fps experience even at 1080p/Ultra/Ray Tracing. Owners of GSync/Freesync displays will be able to enjoy a somehow smooth experience as there were drops to 57fps. As for native 4K/Ultra/Ray Tracing, we are looking at some lovely 18-20fps.

By enabling DLSS Quality (or AMD FSR), we were able to get a smooth 60fps experience at both 1080p and 1440p. As such, DLSS is essential for enabling the game’s Ray Tracing effects. Also, and while FSR Quality runs better than DLSS Quality, its image quality is truly awful. Thus, we recommend staying away from it (unless it’s your only option and you cannot use DLSS). As for 4K/DLSS Quality, our RTX3080 was able to push 31-33fps. Techland claims an RTX3080 with DLSS should be able to provide  60fps with Ray Tracing at 4K, however, that’s not accurate. Hell, even with DLSS Performance Mode, we saw numerous dips to 50fps (though we did have an average of 60fps). 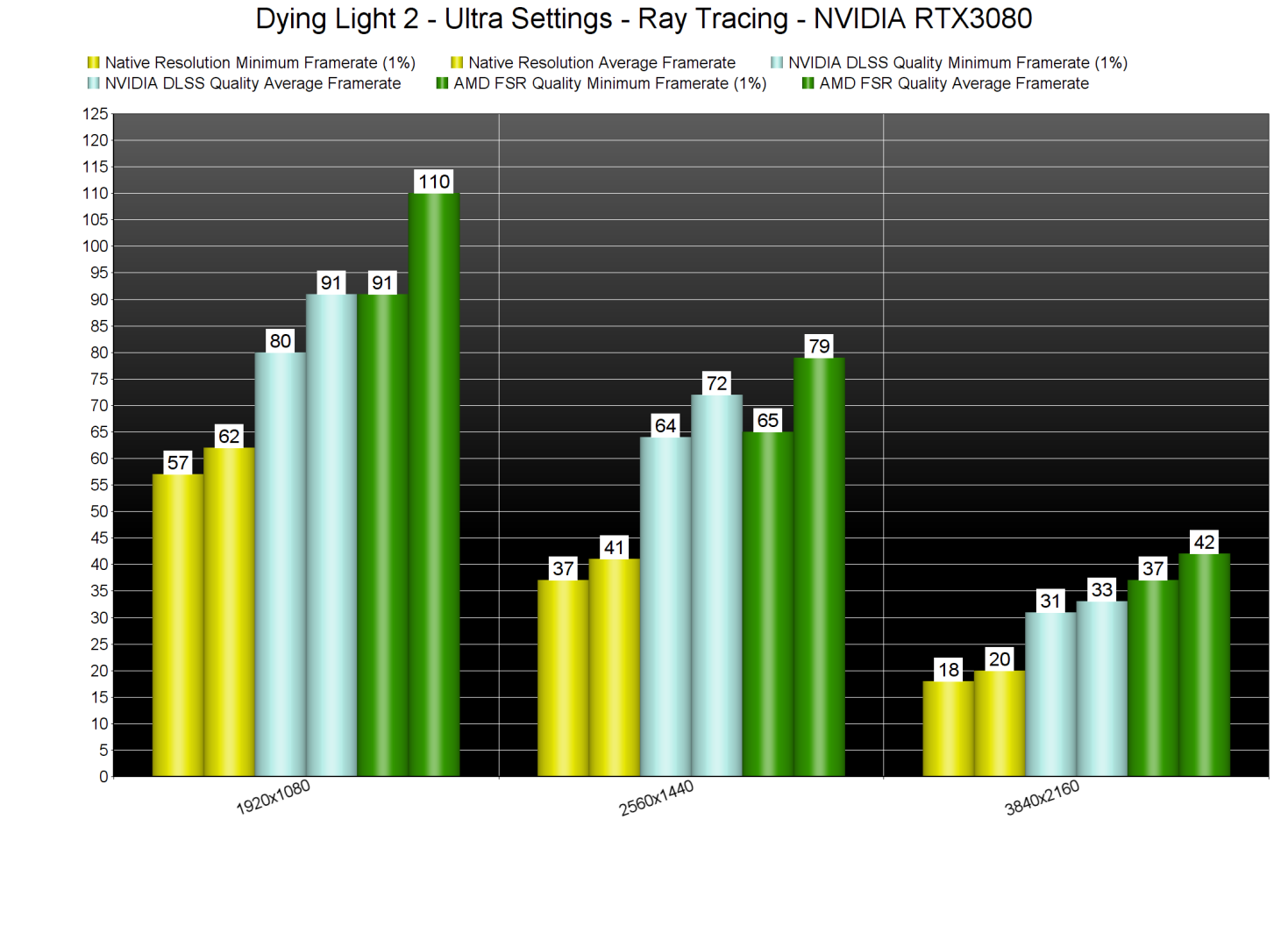 All in all, the Ray Tracing effects of Dying Light 2 are quite demanding. Still, these effects can greatly improve the image quality of the game, so we strongly suggest enabling them if you can. The AMD FSR implementation appears to be okay-ish, though it produces a noticeably blurrier image. On the other hand, NVIDIA DLSS is bugged and suffers from ghosting issues. As said, NVIDIA is working on a fix. Once the green team manages to address these issues, DLSS will be a must for all RTX owners.

Stay tuned for our PC Performance Analysis in which we’ll be benchmarking various GPUs from NVIDIA and AMD!