For this Performance Analysis, we used an Intel i7 4930K (turbo boosted at 4.0Ghz) with 8GB RAM, NVIDIA’s GTX980Ti and GTX690 GPUs, Windows 10 64-bit and the latest WHQL version of the GeForce drivers. While NVIDIA has not added any SLI profile for Ashes of the Singularity, Oxide’s title supports multi-GPUs. Those with SLI/Crossfire systems can enable multi-GPU support via the game’s video options.

Let’s start with our GTX690. This particular card was not able to offer a constant 60fps experience during the benchmark. Even when we dropped the graphics details to Standard, we were averaging around 40fps. Do note that the benchmark uses a worst case scenario, however there might be some huge battles in which your framerate will be similar to the in-game benchmark.

But can the GTX980Ti provide a constant 60fps experience when all the bells and whistles are enabled? Unfortunately, it cannot. Our GTX980Ti was able to push 42.7fps on Crazy settings at 1080p (though we’ve disabled MSAA) in DX11 and 51fps on High settings in DX11. For a strategy game, these framerates are completely acceptable, however those seeking to run the game on Crazy settings with a constant 60fps will have to invest on a high-end system with a really high-end CPU and multiple high-end GPUs.

But what about DX12? Well, to our surprise, Ashes of the Singularity ran better under DX12 on our system. In DX12, our GTX980Ti was able to push 43.8fps on Crazy settings at 1080p (without MSAA), and 59fps on High settings. Do note that our GPU was being pushed to its limits in both DX11 and DX12, though there were some scenes in which the GPU usage was dropping for no apparent reason.

What we also found really interesting with Ashes of the Singularity was our Average CPU Framerate stats. According to the benchmark, our CPU averages around 62fps. This number reflects the framerate that can be achieved when the CPU is not bottlenecked by the GPU. In other words, our hexa-core is not powerful enough to avoid drops below 60fps. So, while we are GPU limited on Crazy settings at 1080p, we are actually CPU limited on High settings at 1080p.

From the above, it becomes obvious that a single GTX980Ti is not able to max out Ashes of the Singularity. Not only that, but the benefits between 8 and 12 threads are minimal, despite the fact that the game scales well on all 12 threads. Furthermore, and even when turbo boosted at 4Ghz, an Intel i7 4930K will bottleneck high-end multi-GPU configurations.

Ashes of the Singularity is a really demanding title in order to max out. Graphics wise, the game looks good when lots of units are on screen. The game shines when there are lots of units on screen as those battles are really amazing with lots of effects, smoke particles and explosions happening simultaneously. However, and apart from its grand scale, it does not push the visuals to the next level. Yes, the game looks beautiful and has cool particle effects, but there is almost nothing to really ‘wow’ you. Some textures that have been used look blurry when zoomed in, and some structures and units look a bit blocky when zoomed in. Perhaps we expected a bit more from it. However, it’s a bit underwhelming witnessing NVIDIA’s high-end GPU being unable to max out a game that displays this kind of visuals. 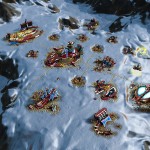 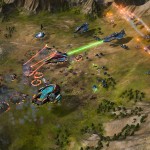 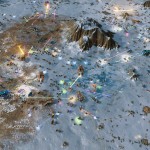 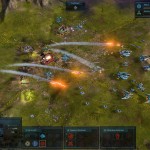 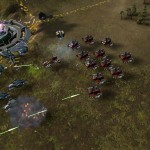 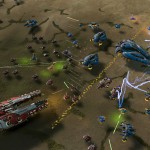 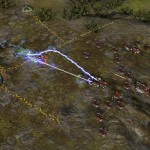 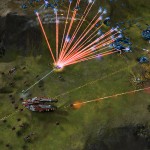 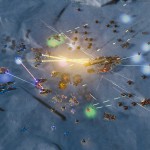 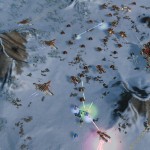 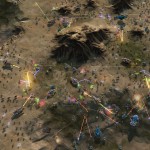