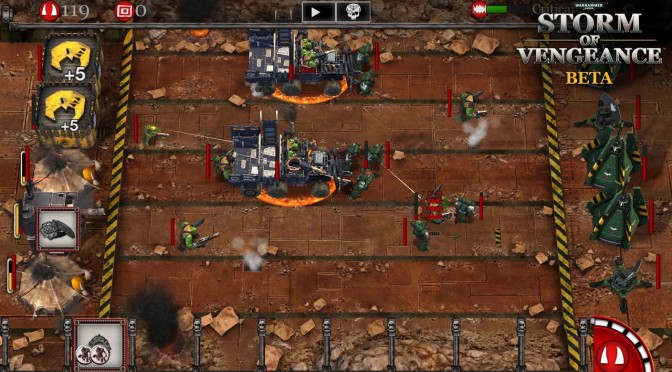 Let me borrow a Deus Ex: Human Revolution line; I never asked for this. But here is a new Warhammer 40K game, so hey, some may find it interesting. Eutechnyx has announced announced a range of DLC packs for both the Steam and mobile version of Warhammer 40K: Storm of Vengeance.

Available from launch, fans of the Warhammer franchise will be able to purchase new units including the Ork Stormboy, The Dark Angel and The Deathwing Terminator unit.

The Ork Stormboy allows the Ork player to take to the skies with a rokkit strapped to their back as they sweep into action against their foes.

The Dark Angel Dreadnought brings the awesome might of their mechanised fury to bear against their enemies, adding a serious extra punch to the Dark Angels arsenal.

The Deathwing Terminator unit enables the player to bring the elite of the Dark Angel chapter teleporting to the battlefield to deliver the Emperor’s justice.

In addition to the new units, new Ork Clan Skins will be arriving, allowing the discerning Ork Warboss to lead either the Bad Moons or Death Skulls clans in addition to the Goff clan available with the release game.

Warhammer 40K: Storm of Vengeance is a lane strategy title with enabled cross platform multiplayer over mobile, tablet and PC, will be priced at 8,99€, and will be released on April 3rd.