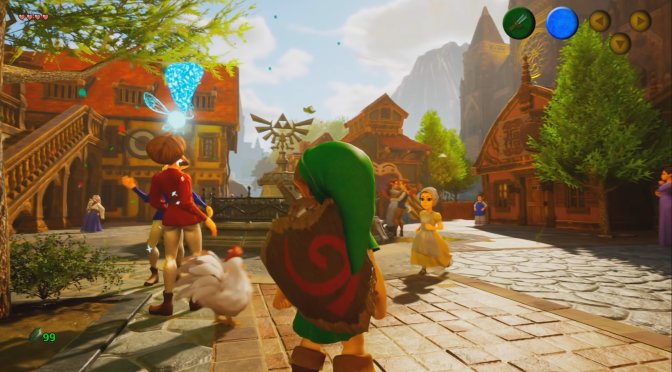 CryZENx has released a special version of his The Legend of Zelda: Ocarina of Time fan remake in Unreal Engine 5.1. This is the first public release of the UE5.1 version of this fan remake, and we highly recommend downloading it.

The Legend of Zelda: Ocarina of Time in Unreal Engine 5.1 uses Lumen and Nanite. As such, and even in this early stage, this WIP build looks noticeably better than its UE4 version.

Since this is a Christmas Special version, you can expect some Christmas stuff (that aren’t obviously present in the original Nintendo 64 game). For example, Link wears a Christmas hat and there are Christmas decorations.

Needless to say that this is something cool that will most likely put a smile on your face. So, go ahead and download this project from here. Below you can also find a video that showcases this special Christmas build.

Lastly, and speaking of Unreal Engine 5, we suggest downloading these other fan remakes. For instance, you can download a Superman UE5 Demo, a Halo 3: ODST Remake, and a Spider-Man UE 5 Demo. There is also a fan remake of Halo: Combat Evolved’s “Halo” level. And then we have The Lord of the Rings: Conquest Reimagined in Unreal Engine 5.