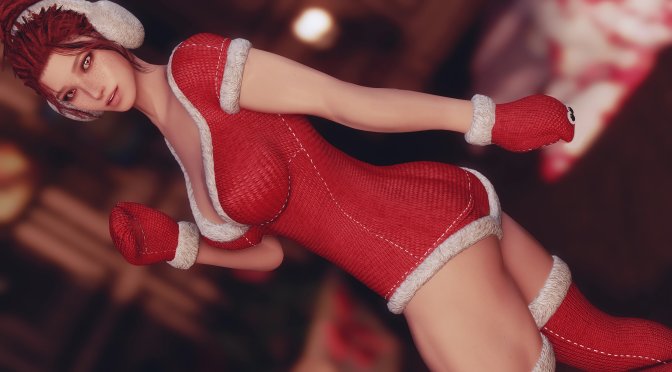 It’s Christmas time and today we are presenting you some Christmas-themed mods for The Elder Scrolls V: Skyrim, Cyberpunk 2077, Fallout 4 and Devil May Cry 5.

Let’s start with Cyberpunk 2077. Modder ‘xBaebsae’ released a mod that adds a Christmas gift wrap Outfit to the game (and there are 6 colors available to choose from). Additionally, Kratoes released a mod that decorates all of the player apartments including almost all of the vendors in the game to fit the christmas theme. There is also this mod from Gigil that adds various Christmas/New Year stuff to the game. And lastly, PinkyDude released this mod that adds 3 comfy festive hats (that come in 4 colors to choose from).

Regarding Skyrim Special Edition, modder ‘wammy’ released a Christmas outfit that you can download from here. More importantly, though, modders wSkeever – Kreiste released the Spirit of Saturalia – A Christmas Quest. This mod adds an entire Christmas adventure, allowing players to explore a snow globe. This is a must-have Christmas mod, and you can download it from here.

For our Fallout 4 fans, we have the Santatron – Jolly Christmas Companion Armed with Coal Mod. This mod adds a Santatron companion, coal weapons for automatron robots, and a small variety of other goodies.

Last but not least, there is a Santa Costume Pack for Devil May Cry 5. This pack gives everyone their own custom Santa costume and some special accessories.

Have fun and merry Christmas everyone!