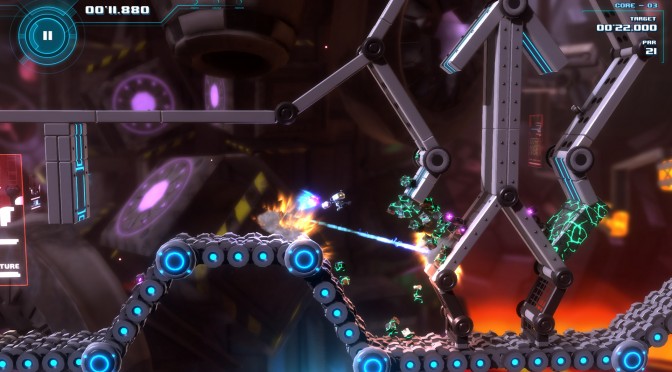 Tinertia is described as an explosive action-platformer built on the premise of Quake-style, rocket-powered physics, fueled with Sonic-like speed through each of the vibrant, ever-changing levels that delivers the perfect balance between twitchy gameplay and skill-based fun.

In Tinertia, gamers play as Weldon, the inauspicious robot who is equipped with a powerful rocket launcher that enables players to propel themselves through a kaleidoscopic series of challenging industrial environments.

“Weldon is stranded on a planet controlled by the evil ARC that has identified him as a threat and is now prepared to destroy him at any cost. Geared for the streaming generation with easy to pick-up but tough-to-master mechanics,  Tinertia challenges gamers to harness the power of rocket-jumping.”

Players will control the momentum, rhythm and speed of Weldon to launch him over deadly obstacles, outrun robo-bosses, and ultimately escape off the planet.

“Tinertia is an addictive, surprising and challenging platformer that we’re proud to bring to gamers and put our name behind. This is a tremendous milestone for our company and we’re going to continue listening to our community and add new features so gamers who dive into Tinertia will always have a fresh, surprising and fun experience.”

The premise of Tinertia is simple in design, but unique from other action-platformers – Weldon’s powerful rocket arm is capable of blasting him at manic speeds, but precise enough to deftly maneuver around deadly obstacles. Featuring infinite rockets, players can chain their shots to leap huge gaps, or rapidly ascend vertical barriers.  Whether players furiously fire rockets to blaze across a level, or take their time and methodically plot their course –  it’s all fluid and perfectly contained within Tinertia’s tightly honed control scheme.