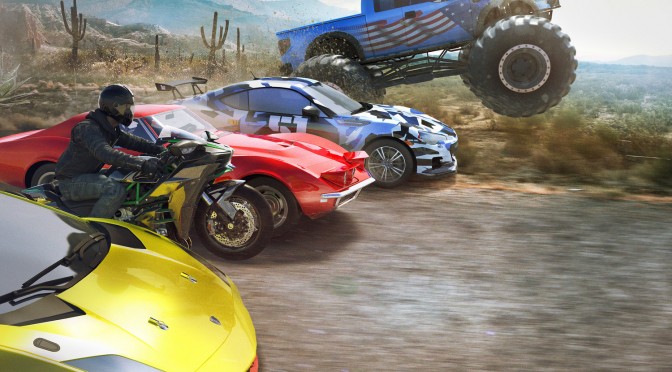 Ubisoft has announced that The Crew: Wild Run, the expansion to the action-driving MMO The Crew, is available worldwide for download on UPLAY. In addition, all players of The Crew will experience a free update including updated graphics, new lighting effects, redesigned areas adapted for all types of vehicles and the all-new weather system.

In The Crew Wild Run, players will hit the road with four new vehicle types created to test their driving skills and push the limits of the road: dragsters, designed to reach incredible top speeds; drift cars that demonstrate impressive control; unstoppable monster trucks that can perform dangerous backflips and insane jumps; and a range of agile motorcycles geared to take on the fastest cars on- and off-road.

The Crew Wild Run will rally players to “The Summit ”, the largest challenge in a driving game to date, where they will showcase their talents across the widest range of skillsets and terrains. Each summit will last three days on average and will take place in iconic US locations. Two Summit Qualifiers will pop up every week. After a full month of intense competition, the best participants will get access to the Monthly Summit Finale in order to battle to become king of the road and be rewarded with an exclusive new vehicle. Players will have a chance to challenge their friends in FreeDrive activities, allowing them to create their own race in The Crew’s gigantic open world playground. Speed and skill challenges as well as Stunt competitions will also be on schedule, with brand-new trials created exclusively to fit new vehicles’ specificities.

Moreover, an updated free trial version of The Crew will be accessible for all players, giving them access to two hours of gameplay on all platforms. They will also be able to complete the game’s prologue; to explore the playground; to start the story campaign playable solo or in co-op; participate in Extreme Spec Trials to get a feel for Drift cars, Dragsters and Monster Trucks; or visit the Saint-Louis Bike Dealer to test-drive motorbikes on offer.