At the recent CES 2021 keynote, NVIDIA officially announced the company’s mainstream GeForce RTX 3060 12GB GPU in the Ampere lineup of cards. The GeForce RTX 3060 will officially launch on February 25th. This is the first GA106-based GPU which is equipped with 12GB of GDDR6 memory, and sports 3584 CUDA cores.

The card has an MSRP of 329 USD, however, you shouldn’t expect it to be sold at this price, amidst the recent graphics card shortages in the market, and with several retailers selling these new Ampere-based cards way above the official MSRP value.

Prior to this official announcement made by Nvidia, there were rumors circulating on the web that the company might have more Ampere RTX xx60 variants in the pipeline. Considering the company’s history with the 60 series of GPUs, many were hoping that Nvidia might also release a 6GB SKU of the RTX 3060 GPU.

After all, the company did release the GTX 1060 6GB and 3GB variants based on the PASCAL GPU architecture, albeit with slightly different specs like CUDA cores.

Coming back on the topic, recently a new filing from the Palit GPU brand was submitted to the South Korean National Radio Research Agency/NRRA, which gives us some hint that the manufacturer might also launch a 6GB variant of the RTX 3060 GPU.

This was spotted by twitter user @Harukaze5719, however, this is just a product listing and we have already seen similar GPU model submissions in the past as well which didn’t materialize.

Just because an entry has been submitted doesn’t mean that this particular SKU will get released, but there are still chances Nvidia might push this SKU to target the mid-range/mainstream market, if the company’s history is anything to go by.

In case you didn’t know, a 6GB MOBILE variant of this GPU already exists in the market. 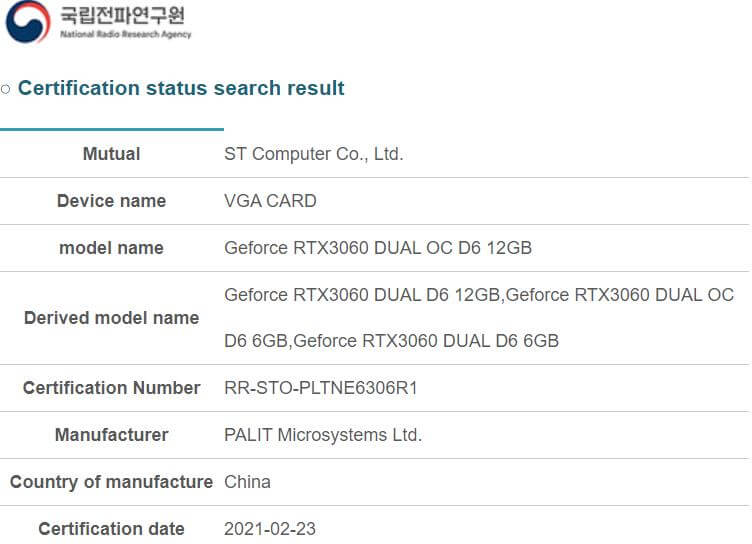 The RTX 3060 12GB SKU was originally expected to launch with 3840 CUDA cores, but eventually the card received only 3584 CUDA cores in the end, which was supposed to be the original core configuration reserved for the RTX 3060 6GB variant.

If Nvidia uses 8Gb chips, and with six channels, 32-bits each, we could then either get a 6GB or 12GB variant carved out from the GA106 silicon. So it seems likely that we might get a 6GB variant as well.

But does all of this really matter for gamers if there are more SKUs in the works? No, because given the recent demand/supply market trend and scalping issues, things aren’t normal. And on top of that, the astronomical rise in the price of cryptocurrency has started another “Mining craze” resulting in severe GPU shortages and price hikes lately. Sadly, this whole situation is not going to improve anytime soon.

Nvidia has been simply unable to procure enough raw materials for the GPU production, mainly because of the shortages further up the whole supply chain. As you may already know, both the GDDR6 and GDDR6X memory types are in very high demand, however, other components like VRMs, capacitors, and PCBs, can also impact the supply of finished GPUs.

I wouldn’t be surprised if this trend also applies to AMD’s RDNA 2 GPU lineup as well, and it further continues to Q2 and Q3 as well. Sad times to be a gamer more like? But I digress.

But anyway, the RTX 3060 6GB is going to be a tough sell for sure, unless it is priced reasonably. A 6GB model does make sense though given the current video memory shortages of GDDR6 and GDDR6X. Nonetheless, the RTX 3060 is all-but-guaranteed to fly off of the retail shelves very quickly like other Ampere GPUs.

Speaking of the RTX 3060 12GB SKU, the GPU is already more expensive than the RTX 3060 Ti at some retailers online, and the card has already hit the second-hand graphics card market in Belarus, even before its official release date (which is indeed ridiculous).

Below are some prices at an unknown US retailer, as reported by Coreteks. Though, you should take this info with a huge grain of salt, since the identity of the seller/retailer cannot be verified at this time of writing.

One Belarusian tech marketplace ‘Onliner’ has also listed three GIGABYTE RTX 3060 Eagle OC custom-design graphics cards for 2,800 BYN (which amounts to roughly USD $1,080) a piece. Unfortunately, this is not the price of all three cards, but for a single GPU. That’s a ludicrous price tag to say the least, and I hope Nvidia at least takes some action of some sort to curb this practice. 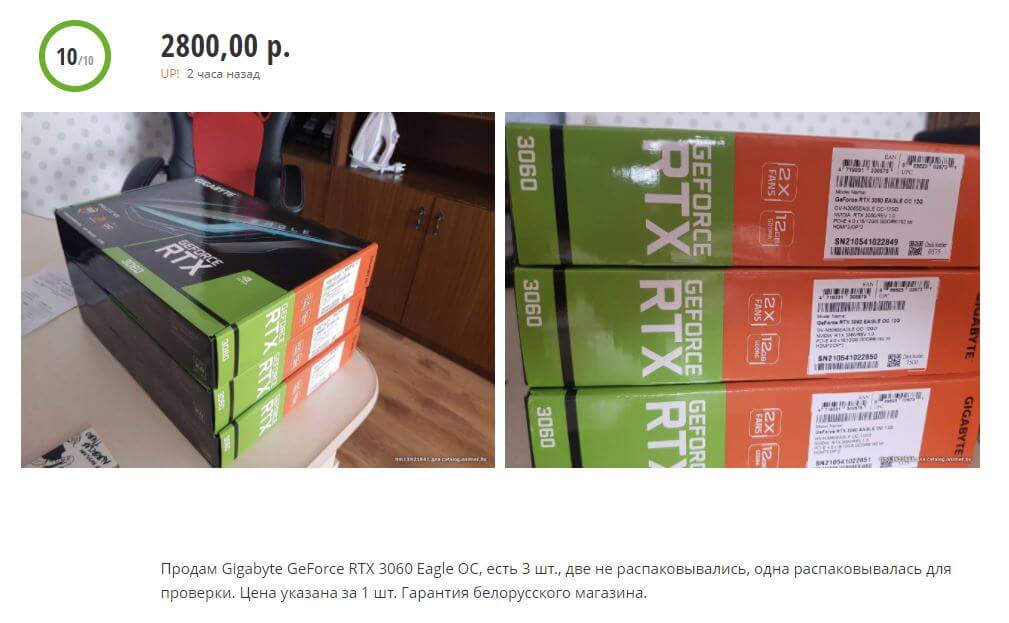 It should be noted that Nvidia’s official MSRP for the RTX 3060 card is $329 USD. However, since Nvidia won’t be making any Founders Edition RTX 3060 cards and all manufacturing will be left to the AIBs, so the actual cost in the end will likely be closer to $400/500 USD.

It’s no surprise that Nvidia’s RTX 3060 launch will likely be remembered as one of the worst ever hardware releases. On some other related RTX 3060 news, NVIDIA has recently “nerfed” the Ethereum Hash rate, and has launched new CMP Dedicated Mining Hardware as well.

NVIDIA announced four CMP HX cards, which will offer Ethereum hash rate from 26 MH/s at 125W to 86 MH/s at 320W. These cards will be offered with up to 10GB of VRAM. The release of these new CMP HX series is in response to the growing popularity of Ethereum mining.

As Nvidia stated, “CMP products — which don’t do graphics — are sold through authorized partners and optimized for the best mining performance and efficiency. They don’t meet the specifications required of a GeForce GPU and, thus, don’t impact the availability of GeForce GPUs to gamers.”

But here is the most interesting part. NVIDIA at the same time also announced that the upcoming GeForce RTX 3060 will have a special driver that will automatically detect mining-specific algorithms, which will limit the hash rate by 50%.

However, according to NVIDIA’s Bryan Del Rizzo, the cryptocurrency mining nerf is more than just a driver limit. The driver is just one part of the limit, Bryan told Ryan Smith of Anandtech.

The whole process occurs through a secure handshake between the GPU, driver, and the BIOS (firmware). All three prevent the removal of the hash limiter. While NVIDIA seems confident that this would be enough to tackle miners running GeForce GPUs, but there are chances that VBIOS and driver mods could potentially allow miners to bypass the hash limit.

This isn’t to say that the driver throttling approach won’t work.

No, Anandtech actually reports that there is a very real chance it’s not going to work for very long, especially with miners so financially motivated to work-around it. Complicating matters, NVIDIA has been shipping mobile RTX 3060 hardware and drivers since late January as part of the RTX 30 series for laptops, so driver hackers already have a starting point for “clean” GA106 code.

“Because the block is being done at the driver level, it’s also extremely vulnerable to being patched out. Miners only need to hack one driver, and then every RTX 3060 card from here-on out can be used for mining by using that driver.”

Lastly, some RTX 3060 scores were spotted recently in the Ashes of the Singularity benchmark database, coming via @leakbench. AOTS might be a less-representative benchmark for actual GPU performance; however it does paint a picture of the card’s overall performance.

The RTX 3060 was tested in the 1080p crazy preset, with an Intel Core i7-8700K CPU. It scored a total of 6600 points and 67.8 average frame rate in the first test. Coming to the second test, the card achieved 6800 points and 69.8 FPS on average. The second test might’ve been run with increased power limit and/or GPU clocks. 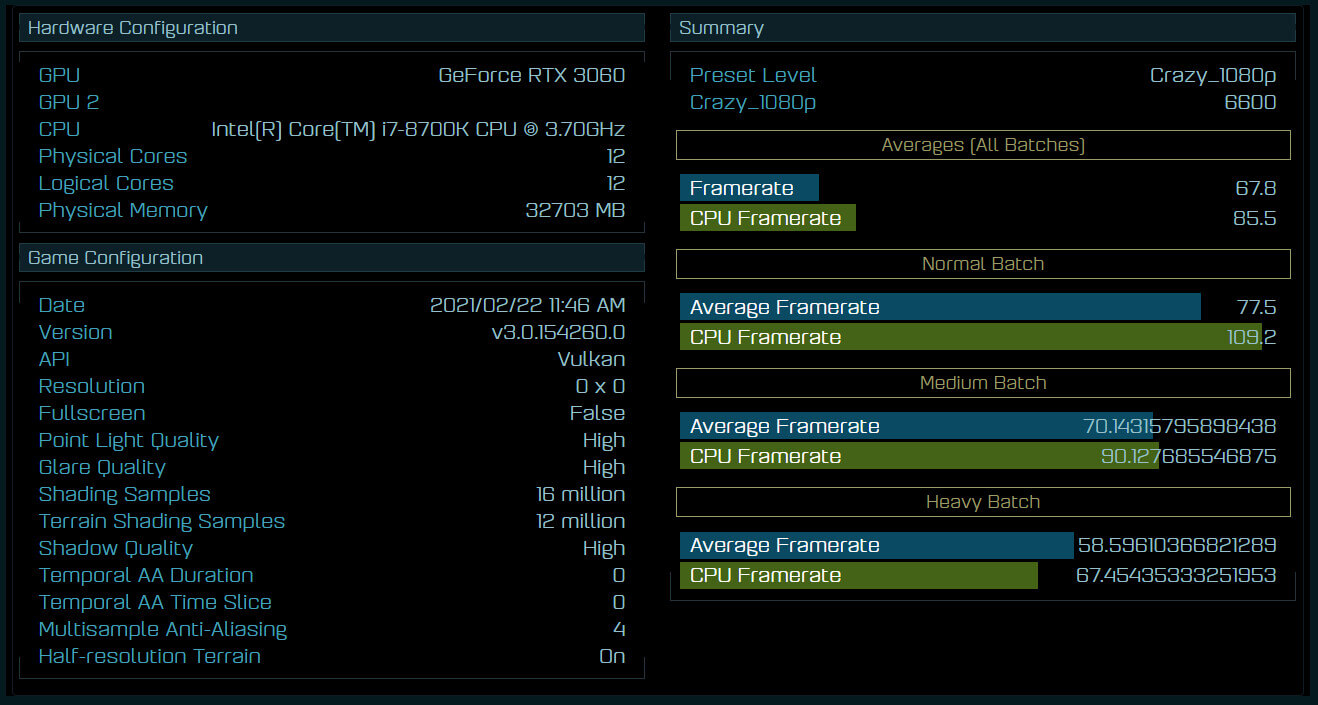 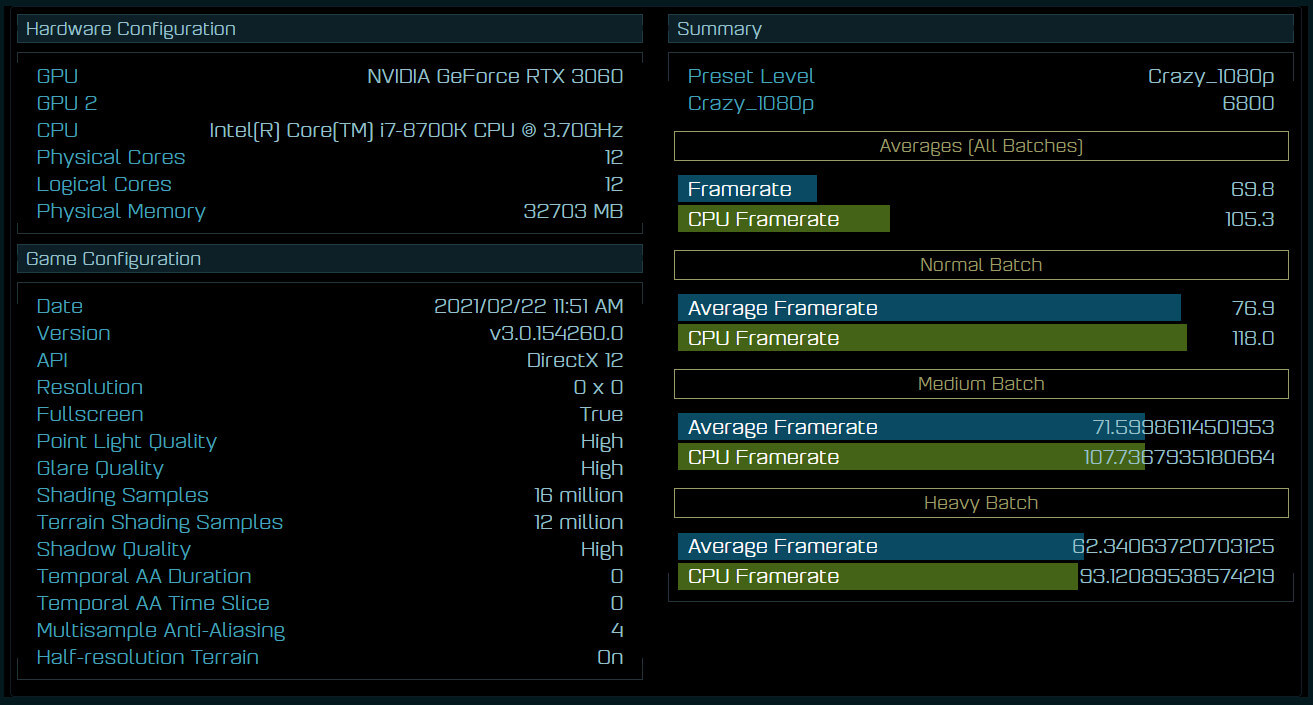