Grinding Gear Games has revealed that a new beta build for their upcoming free-to-play action RPG, Path of Exile, will be released this week. In addition, the company has released two new screenshots for it. The first one shows a Templar using the new skills Molten Shell and Lightning Strike to fight Brutus while the other one shows off a multiplayer fight between a pair of players and some of the new snake monsters in Act Two.

In case you were unaware of, Path of Exile is a free online-only action role-playing game set in the dark fantasy world of Wraeclast. It is currently under development by Grinding Gear Games in New Zealand and new players are being added continuously to its Closed Beta Test.

Path of Exile is obviously inspired by Diablo and will feature a persistent online world capable of supporting hundreds of thousands of players, a dark and gritty game world rendered from a fixed 3D perspective, randomly generated levels and items for extreme replayability, dozens of foes, Online ranking and ladders for every game mode and visceral combat with dozens of combinable skills. Oh, and will be free-to-play. 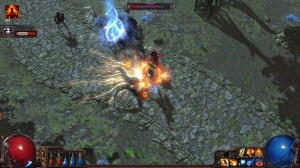 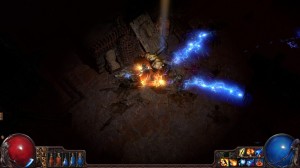