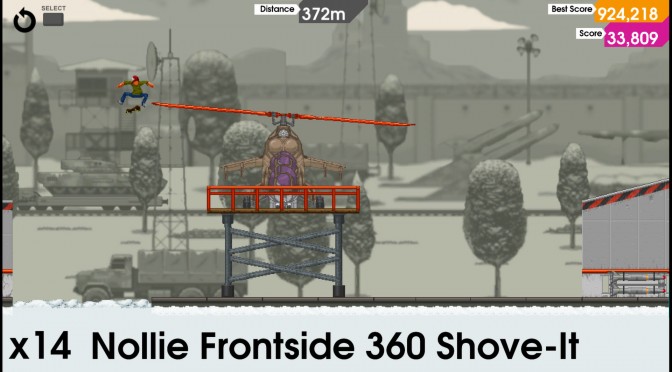 Devolver Digital and Roll7 have announced that OlliOlli, the critically-acclaimed skateboarding game, is now available for PC, Mac and Linux on Steam, Humble and GOG. Those interested can skate over to Steam right now and grab OlliOlli at 10% off the usual price of $12.99 this week only.

Devolver Digital and Roll7 also confirmed the addition of the Daily Grind competition for wannabe pro-digital skaters. The Daily Grind is a special mode where each OlliOlli player gets to practice on a new course each day, before committing to one final run for the leaderboards. From today until 29th July, the top score on the global leaderboard each day will be rewarded with a prize pack of free Devolver Digital games on Steam.

OlliOlli first launched on the PSVita to stellar reviews for its trance-inducing gameplay. Lovingly handcrafted for PC, the latest version includes all four game modes and supremely precise controls for the ultimate board movement and more.

OlliOlli PC comes with more than 120 different tricks and grinds to master and combine in amazing and ridiculous ways, more than 250 challenges, and a RAD mode that unlocks only after you’ve mastered all other challenges.