It appears that the first picture of Nvidia’s flagship Ampere RTX 3090 card has been leaked by a Twitter user @GarnetSunset. From the photo we can clearly see that the RTX 3090 is a massive 3-slot GPU.

The GPU design appears to be much bigger, and it will require three slots on your Motherboard. This model appears to have the same irregular shaped PCB which was leaked before. My guess is that this is the reference Founders Edition graphics card sample.

The fans appear to be bi-directional, and both fans seem to be placed on opposite sides of the card which might help push the air in different directions. The heat sink is also curved, and we can see that the card features an irregular V shaped PCB. This time the full GPU shroud/design is in black. The I/O bracket clearly has 3 fingers, and this model appears to be bigger and wider than the RTX 2080 GPU which is also pictured along with this card. Like mentioned above, the RTX 3090 will occupy three slots on the motherboard. The RTX 3080 GPU which was leaked before was a 2-slot card.

The card’s backplate appears to have the RTX 3090 label, though it is not clearly visible. The expected price/MSRP of this card is around $1400 USD according to the leaker. The full specs are not known at this time, but this GPU is supposed to feature the ‘GA102’ GPU die, having at least 5248 CUDA cores along with 24GB of GDDR6X memory (based on speculation).

Though, please make a note that the pricing is also not confirmed yet, and Nvidia can do last minute changes before the official launch/embargo date, so the final retail price might differ.

NVIDIA’s upcoming RTX 3000 series Ampere cards are rumored to be built on the Samsung’s 8nm process node. Nvidia has also recently ceased the production of the RTX 20 series of GPUs to make room for the Ampere lineup. Nvidia is hosting a Geforce Special Event on September 1st, and we expect the company to announce the next-gen Ampere Gaming GPUs. 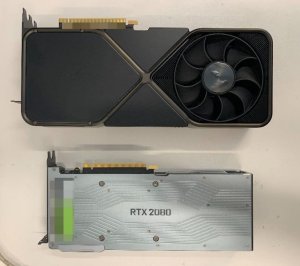 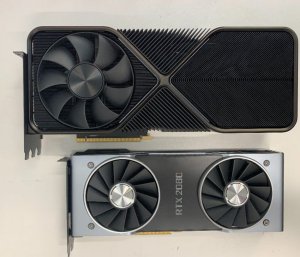