As you may already know by now that Nvidia’s new Ampere lineup of flagship RTX GPUs have a steep PSU requirement, slightly more than the previous-gen Turing cards.

Nvidia’s new RTX 30 series Ampere Founders Edition gaming GPUs will also utilize a new 12-Pin power connector interface. We have already seen power consumption figures exceeding 300 Watts on some of the Ampere cards before. The cooler and the heatsink also appear to be a huge update over the traditional reference design that Nvidia has offered over the years. Nvidia officially recommends a minimum 750 Watts power supply unit for the RTX 3080 and RTX 3090, but for most of the systems a beefier PSU may be required, depending on the type of CPU installed on that particular system.

But do note that the actual PSU requirement will still vary depending on the system, based on the number of components installed, since each PC is different. ASUS has also included the data for the Turing lineup of cards. Some of the gamers might be requiring a PSU upgrade, should they plan to upgrade to the RTX 3090/3080/3070, but with the looming global shortage crisis it may be hard to grab a unit at a reasonable cost, since the PSU prices have recently skyrocketed. 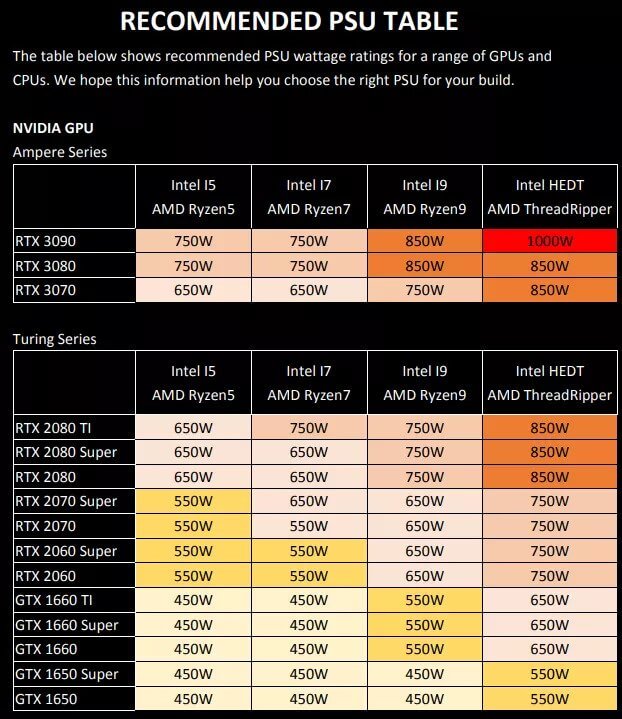 As you can see from the above table, the recommended PSU requirement for the flagship cards is slightly higher than what Nvidia has advertised.

Going into more details, a 750W power supply may be required for the RTX 3090 GPU when it is paired with any of the mainstream Intel Core i5/i7and AMD Ryzen 5/7 CPUs. That requirement will jump to 850W when the RTX 3090 is paired with the Intel Core i9 and AMD Ryzen 9 chip. Lastly, a 1000W PSU may be required for Intel HEDT and AMD Threadripper platforms.

Nvidia’s recent strategy with the Ampere GPU lineup puts performance over power consumption, which will force a lot of PC builders to upgrade their PSUs, assuming they are currently rocking a lower wattage PSU. Though, the power supply volume production has been at an all-time low, causing stock outages and prices to skyrocket. The following market factors need be taken into account:

Speaking of PSUs, I just wanted to highlight these points as well.

Anyways, as you already know that PSU is the most important component of any rig or PC. First off, the Wattage number is not always the deciding factor as many think. The quality and the make/brand of the unit matters the most. The main concern is the quality of the power, the quality of the components used/Capacitors, as well as the total AMP drawn on the +12V RAIL (output), the efficiency under load, ripple suppression, OEM, among other factors.

The total wattage number of any PSU is not always really the most important deciding factor, primary concern is the quality of power it produces, and the total capacity of the 12V source etc. Also, if suppose you have a 500W PSU installed on any RIG, then that does not mean that it will always draw the full wattage, 500 W. Nope. The amount of power drawn is determined by the number of components on that rig or computer, and how much they actually require.

The amount of power drawn will only be equal to what is required, and not more. Suppose, if all the components of a rig require 400 W to run, then the load on the PSU will be 400 W, and hence the power draw of that particular PC will always be 400 W (depending on the efficiency obviously), regardless of whether a 500 Watt or a 1000 Watt PSU is installed.

PSU efficiency is a totally different matter though, as how well the PSU converts the AC power it receives from the outlet, to DC. Any electricity which is not converted from AC to DC is given off as heat. PLATINUM certified PSU might help you save a little on your electricity bill, over a year, though this depends on many other factors as well. Because any high quality TIER 1 platinum certified PSU is rated for at least 90% efficiency at 20% load, 92% at 50% load, and 89% at 100% load (just a rough estimate).

Some good high-quality units I always recommend to buy, but this list is not exhaustive by any means.

There are many more Models.