Crysis 2 modder ‘TheModMan101’ has released a high-resolution asset pack for Crytek’s little gem. This Alpine Asset Pack features – among other things – new textures for Pine Needles, Moss, Mud, Gravel, Pebbles, and Grass. TheModMan101 has also released some screenshots from it that can be viewed below. The end result is amazing and we can’t wait to see those assets being used in custom-made maps/mods. 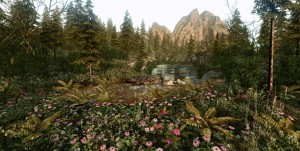