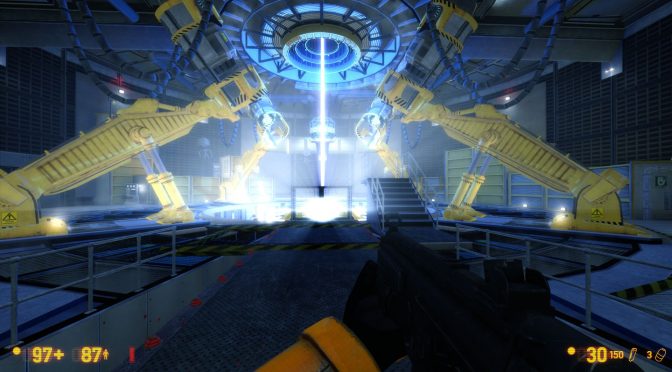 Last month, Crowbar Collective claimed that a new patch would overhaul Black Mesa’s graphics. And today, we are happy to report that this update is available to everyone. Black Mesa’s December patch overhauls its graphics engine by adding new features such as dynamic lighting and deferred rendering, and it looks absolutely great.

Going into more details, Black Mesa’s December patch improves Prop Lighting. As such, the new static lighting supports all the nearby lights in the scene, self-shadows correctly, and also works seamlessly with both our new skydome lighting and the game’s new dynamic lights. Speaking of dynamic lights, this patch adds dynamic lights that are able to cast real-time shadows, project textures, and emit volumetric light (Godrays).

In order to celebrate this release, the Black Mesa team has also released some new screenshots that you can view below.

As always, Steam will download this patch for Black Mesa the next time you launch its client, and below you can find its key features.

Dynamic Lights – Full featured dynamic lights that are able to cast real time shadows, project textures, and emit volumetric light (godrays). These have been implemented across earthbound to help amp up the visual fidelity and “nextgen-ness”.

Lens Flares – New entity that creates a lens flare with customizable colors, styles, and effects. These have been implemented across earthbound too; only on lights we deemed very bright or important enough to warrant a lens flare.

Overhauled CSM and Godrays – Cascade Shadow Maps (CSM) have been totally rewritten and now run better than before. Godrays are completely overhauled to run smoother and operate off of a new entity that automatically gets the sun angle from the environment light.

New Crossbow Scope – Crossbow scope no longer uses an in game camera to zoom in. This makes the scope easier to aim and increases performance by removing a second rendering pass. It also fixes a number of visual bugs with using the scope throughout the game.

Image Based Ambient Lighting – Lighting can now be generated based off of the skybox image. This allows mappers to have significantly more accurate environmental lighting, which automatically takes into account the nuances and difference colours of the sky. This is unlike any other version of Source, where environment lighting is simply one flat colour picked by the mapper.

4 Way Texture Support – 4 way texture blends are now supported in engine, each with their own bump map, specular map, and procedural blending options. This allows for much more variety in texturing natural landscapes, as most older versions of Source only support 2 way texture blends.

Better Hammer Compiles – Hammer now uses current windows themes and the compiler does not block you from continuing to use Hammer; running in a separate batch window (similar to CSGO).

Improved Blood Particles – Updated and improved blood particle effects for NPCs, to not look as blocky and unrealistic.

New Long Jump Mechanics – Modified long jump mechanics to be more similar to modern day games (press “jump” twice to long jump). Added a long jump recharge meter and “mana” mechanic to keep people from spamming long jump in both single and multiplayer (the long jump has a limited charge, with a medium base recharge rate, and the jumps consume this charge). Added a small “pop jump” mechanic to allow course corrects while player is mid air.

Dynamic Light Implementation – Moved all existing old Source dynamic lights over to our new dynamic lights system. This should improve visuals and reduce hitching when a dynamic light is activated (such as explosions, flashlight, Xen portal, muzzle flash, etc).

Doubled Source Displacement Limit – Max number of displacements allowed per map from 2048 to 4096. This allows the creation of more detailed and expansive natural outdoor environments.