2K Sports released the packshots for their upcoming basketball game, NBA 2K12. 2K will offer three separate covers featuring three of the NBA’s greatest legends of all time, Michael Jordan, Larry Bird and Magic Johnson. You can view them after the jump.

The new stylized NBA 2K12 covers are a unique, one-time departure from the traditional 2K Sports brand artwork, and will spotlight each legendary athlete on his famous team: the Chicago Bulls, Boston Celtics, and Los Angeles Lakers. The covers featuring Bird and Johnson will be available at launch in a limited quantity.

A new feat in sports gaming, this three-part collection extends the strong legacy established by NBA 2K11, which has sold-in more than 5 million units worldwide and garnered over 20 video game accolades, including 14 ‘Sports Game of the Year’ honors.

“Bringing Michael Jordan to the virtual hardwood last year was a huge success for NBA 2K11 ; however, we didn’t want to stop there,” said . “We’re bringing ‘His Airness’ back to the NBA 2K franchise as part of a multi-year extended partnership, along with two other legendary icons – Larry Bird and Magic Johnson – for a special cover athlete collection representing the NBA’s greatest heroes.” 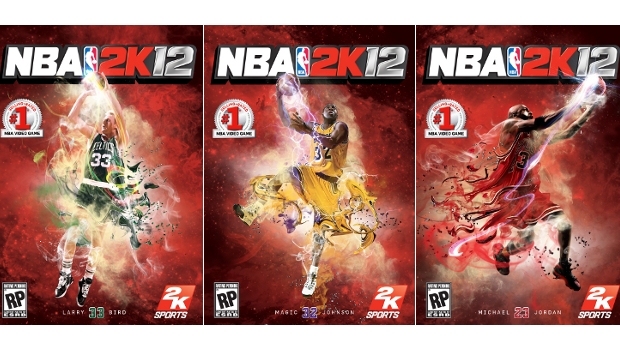