MSI has unveiled its MPG GF series of Power Supplies/PSUs in 850W, 750W & 650W variants, specially designed for Nvidia’s next-generation of Graphics Cards, including the upcoming Ampere GPU lineup. These power supplies seem to be compatible with Ampere GPUs. These are MSI’s first lineup of power supplies. The PSU’s OEM is not yet known, but my guess is that these units are made by MSI’s own in-house production line.

MSI’s MPG GF series of PSUs come in three Models starting with the A650GF, the A750GF, and the A850GF. These new power supplies house high-quality components such as all Japanese solid-state capacitors, i.e. 100% all Japanese 105° C capacitors that are rated to operate stably with a peak temperature of 105C. All three Models are 80 Plus GOLD rated and are backed by a 10-year warranty from MSI.  All 3 PSUs are fully modular. MSI’s MPG GF series of PSUs feature a traditional ATX form factor. There is a mesh grill panel on the top, with a fan blowing in air.

These PSUs feature four 8-pin slots dedicated to PCIe graphics (four PCIe 6+2-pin VGA connectors), up to two 8-pin slots dedicated to the CPU, a standard 24-pin ATX connector, and four 6-pin plugs for SATA and Peripherals. MSI may also be the first PSU manufacturer to ship these power supplies bundled with the 12-pin PCIe power adapter, so it can used with the RTX 30 Founder Edition graphics cards.

This news from MSI comes one day after Nvidia revealed its custom 12-pin GPU power connector. Other PSU manufactures may follow suit. After Nvidia’s official announcement, we can expect other power supply manufacturers to also reveal their 12-pin power support plans.

Following are the product pages for each PSU model:

Seasonic PSU brand recently confirmed the 12-Pin Micro-Fit 3.0 Power Connector for Nvidia’s RTX 30 Founders Edition GPUs. Seasonic also posted a power supply rating of 850W or beyond for use with the 12-pin connector cable, which means the Ampere Founders Edition GPUs are going to draw a lot of power, especially the flagship RTX 3090.

Even though Seasonic is recommending an 850W PSU, that doesn’t mean the RTX 3090 will use/consume full 850W, but it’s definitely going to use 100W+ more than the RTX 2080 Ti if this PSU recommendation is anything to go by. Since the RTX 2080 Ti only requires a 650W PSU. That’s an additional 200W of headroom for any card powered by the 12-pin PCIe power adapter. The Quality of the PSU matters the most though, including the +12V rail rating, instead of pure wattage consumption.

Speaking of the new Molex Micro-Fit 3.0 12-pin connector, some more close-up pictures have been shared by QuasarZone. You can see that the new 12-pin PCIe power connector isn’t just more convenient because it’s a single power connector, it’s actually really freaking small, too. We can see that it takes up about the same width as the traditional 8-pin PCIe power connector, and it looks thinner too. So we could be in for a thin cable going into the new GeForce RTX 30 series Founders Edition cards, but they’ll definitely be consuming more power than the current GeForce RTX 20 series graphics cards. 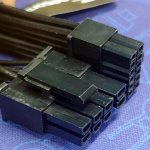 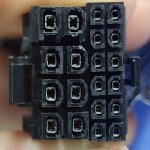 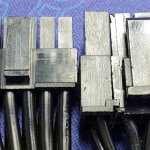