Capcom has announced that Monster Hunter World has sold 10.9 million copies worldwide. This information comes from the official FAQ that can be found on the company’s Japanese website as well as the company’s latest fiscal report, and as it’s pointed out, about 70% of the total was sold abroad. 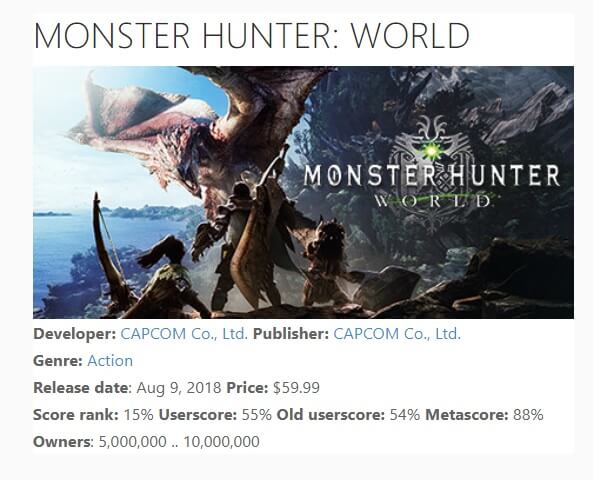 This could explain the team’s determination to fix a lot of PC issues that plagued this latest – and first on the PC – Monster Hunter game. Capcom has recently released a patch that fixes the low-resolution textures bug and improves keyboard controls.

What’s also really cool here is that even without any modding tools, PC gamers were able to mod the game. So far we’ve seen some character replacers, as well as mods for adding important NPCs to the gathering hub, “Quest Editor” & “Monsters HP and Team Damage” mods, and more.

In its fiscal report for the Second Quarter for the Fiscal Year 2018/2019, Capcom stated that it saw strong performance of the Steam version for PC.

Back in June 2018, Capcom stated that the game had shipped 8 million copies. Now while there is a difference between shipped and sold copies, we can assume that the game has sold somewhere around 7 million (at least). What this ultimately means is that there have been almost 4 million sold copies since then (in total). We all know that most console games sell well during their launch period. As such, and by excluding one million copies, we may come close to the real PC sales numbers. At this point we are merely guessing here as Capcom has not provided any platform-specific numbers however Steamspy’s numbers could be really inaccurate in this case.