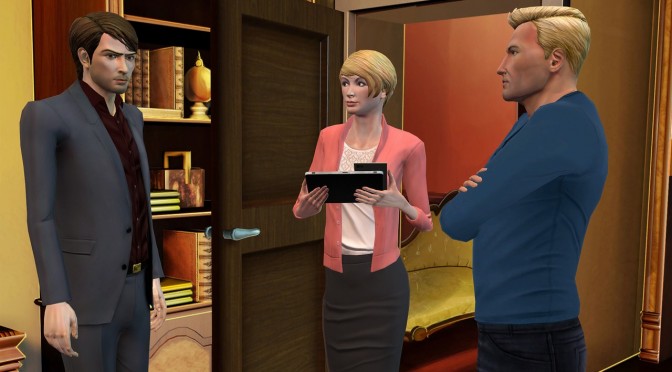 Moebius: Empire Rising is described as a sophisticated, story-driven interactive thriller that is the first in an original series of titles from Jane Jensen. After nearly a decade designing casual games based on franchises such as Agatha Christie and James Patterson’s Women’s Murder Club, Jensen appealed to her fans on Kickstarter and crowdfunded more than $435k to make Moebius: Empire Rising. These funds were used to develop the game in partnership with indie team Phoenix Online Studios, which is publishing the title under its new publishing label.

Moebius is the story of Malachi Rector, a brilliant antiques dealer and historian whose photographic memory and eye for deduction transforms locations and clues into interactive puzzle pieces and historical patterns. A secretive government agency has tapped Malachi for an unusual assignment: fly to Venice and assess whether a recently murdered woman resembles a particular historical figure. As Malachi soon learns, this seemingly innocuous request is linked to a powerful paranormal theory the U.S. government will protect at any cost – and the more he discovers, the greater danger he faces.

Players enter David Walker, a former Special Forces operative Malachi randomly encounters in his travels. David’s exactly the wingman Malachi needs: calm under pressure, an experienced bodyguard, and good with a gun. In fact, the typically distrustful Malachi can’t shake the feeling he’s known David all his life. But as Malachi learns more about the Moebius Theory and his unwitting role in history, even their growing bond might not be enough to protect him..

With its narrative- and puzzle-driven gameplay, Moebius: Empire Rising draws you into Jensen’s signature storytelling as only a video game can. Piece together the links between past and present to discover the secrets the government is hell-bent on hiding. In addition to today’s PC and Mac versions, Moebius will release later this year for iPad, Linux and Android.