A leaked poster – spotted by Kotaku – suggests that Ubisoft’s upcoming open-world game will be hitting stores on Holiday 2013. According to the leaked poster, though, Watch Dogs will be released on home consoles this Holiday season and there is no mention about the PC version.

We already know that Watch Dogs is coming to the PC, so could this mean that the French publisher is planning on delaying the PC version as it did with Assassin’s Creed III? We hope not.

In addition, Watch Dogs will come with some exclusive pre-order content, which is typical for all triple-A games. Curious to see though what Ubisoft will offer as pre-order content and whether or not it will be worthy.

Watch Dogs was shown off at last year’s E3 and was running on the PC. Watch Dogs is said to be coming on both PS3 and X360, though there are some rumors suggesting that Ubisoft’s title could very well hit the upcoming next-generation consoles.

Here is the poster, courtesy of Kotaku! 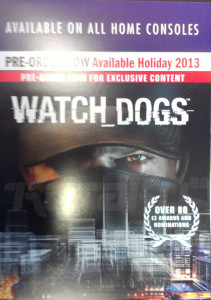 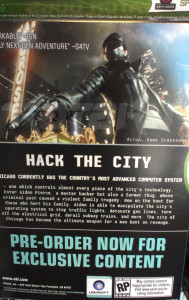