Intel has officially confirmed that its 11th gen Rocket Lake-S desktop CPUs will be launching on the 30th of March, 2021. In response to Hardwareluxx, an Intel spokesperson confirmed the Rocket Lake CPU’s launch schedule.

Rocket Lake 11th gen core family will be officially unveiled on 16th March 2021, and the sales/review embargo ends on 30th of March 2021. However, the Intel Core i7-11700K Rocket Lake CPU SKU has already being sold to customers, way ahead of official embargo, and several performance benchmarks were also leaked before.

One German retailer, Mindfactory has also been selling these 11th gen core processors even before the official embargo date. Almost 1 month ahead of launch. Recently one user from the Chiphell forums got his hands on a retail Core i7-11700K CPU, and he has posted some benchmarks as well, coming via Tom’s Hardware.

It appears that Intel is planning to use AMD’s concept of Infinity Fabric Clock (FCLK) with its Rocket Lake-S CPU lineup, however it’s too early to pass any judgment right now, since Rocket Lake chips have not been officially released. Nonetheless, his findings seem interesting, since he has posted some BIOS screenshots as well.

On Ryzen systems, the latency and available bandwidth for all connected components like the DRAM controller, PCIe bus, etc. is based off the Infinity Fabric speed (FCLK). All of this occurs in an interconnect AMD calls Infinity Fabric.

The Infinity Fabric clock speed (FCLK) is configurable and directly relates to the memory clock (MCLK). For example in Ryzen 3000 CPUs, most will run a 1:1 ratio between FCLK and MCLK, which can be considered synchronous operation, up to 1,800MHz.

There may be instances where the FCLK may be set to operate in an asynchronous mode (not a 1:1 ratio), which may introduce increased latency, thus negating any performance benefit. However, for extremely high MCLK values (>3,600MHz), asynchronous operation may actually increase overall performance, but at the cost of stability.

The physical clock signal that governs this data transfer, however, is 2500 MHz at the advertised speed – the data rate is double the physical clock, hence the name Double Data Rate. In AMD’s language this physical clock is called MEMCLK, and often shows up in bios settings under this name.

MEMCLK is important because of how FCLK and UCLK relate to it.

All three of these clocks are set in a 1:1:1 ratio and are configured based on the memory speeds of the given system, and it is up to the end user to configure these values for best system performance.

Technically, all of these elements have always existed on all AMD’s Zen-based processors, back to 1st generation Ryzen and the enterprise equivalents, but FCLK and UCLK were always locked to MEMCLK making them effectively one and the same.

What differs with 3rd generation Ryzen and beyond is that rather than being tied to MEMCLK, FCLK can now be set totally independently and UCLK has a choice of two ratios to MEMCLK – 1:1 and 1:2 (UCLK:MEMCLK).

Now, according to the Chiphell user’s findings and benchmarks, it seems that Intel might implement a similar memory OC feature with its new Rocket Lake CPU lineup, though it is still too early to jump on any conclusion.

But from the BIOS screenshot posted by the user, we can see that there are two operational modes for the CPU IMC (integrated memory controller) and the DRAM clock on MSI’s Z490I Unify motherboard. The first option is listed as Gear 1 which runs both in a 1:1 ratio, while Gear 2 on the other hand puts them in a 1/2:1 ratio. 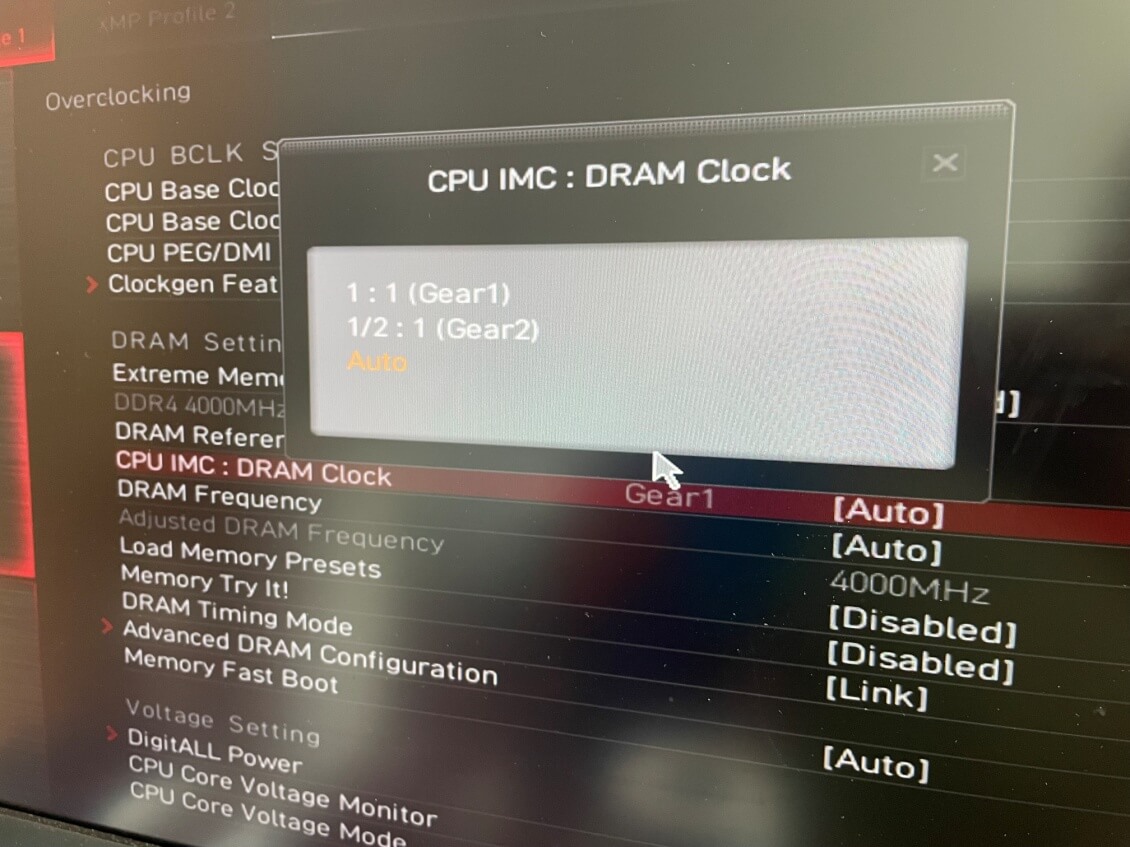 This is similar to how the FCLK works on AMD Ryzen CPUs. According to the Chiphell user/tester, DDR4-3733 MHz seems to be the limit at which Rocket Lake’s IMC can run in a 1:1 ratio with the memory clock.

DDR4-3733 MHz might be a cap on Rocket Lake CPU lineup, but we don’t know whether this is built into the Rocket Lake silicon itself, or this is just an early Microcode, which might not be fully optimized to work.

Regardless, the feature appears to work similarly as AMD’s FCLK. Assuming Intel did indeed implement a DDR4-3733 hard cap, then the blue team might lose to AMD’s latest Zen 3 processors. Because some Zen 3 SKUs have already peaked as high as 2000 MHz FCLK (DDR4-4000), before breaking the synchronous mode.

A proper firmware might still be required to make Rocket Lake chips operate properly, assuming this is how Intel plans to implement AMD’s equivalent of FCLK. The Chiphell forum user also posted some RAM benchmarks.

From the RAM benchmarks shown we get to know about the performance impact of this feature. First up, the user got a latency of 61.3 nanoseconds in AIDA64 benchmark, on a DDR4-4000 MHz memory kit with 18-20-20-40 1T timings in asynchronous mode.

The DDR4-4000 memory kit on the other hand had loose timings, hence the higher latency while doing the test. 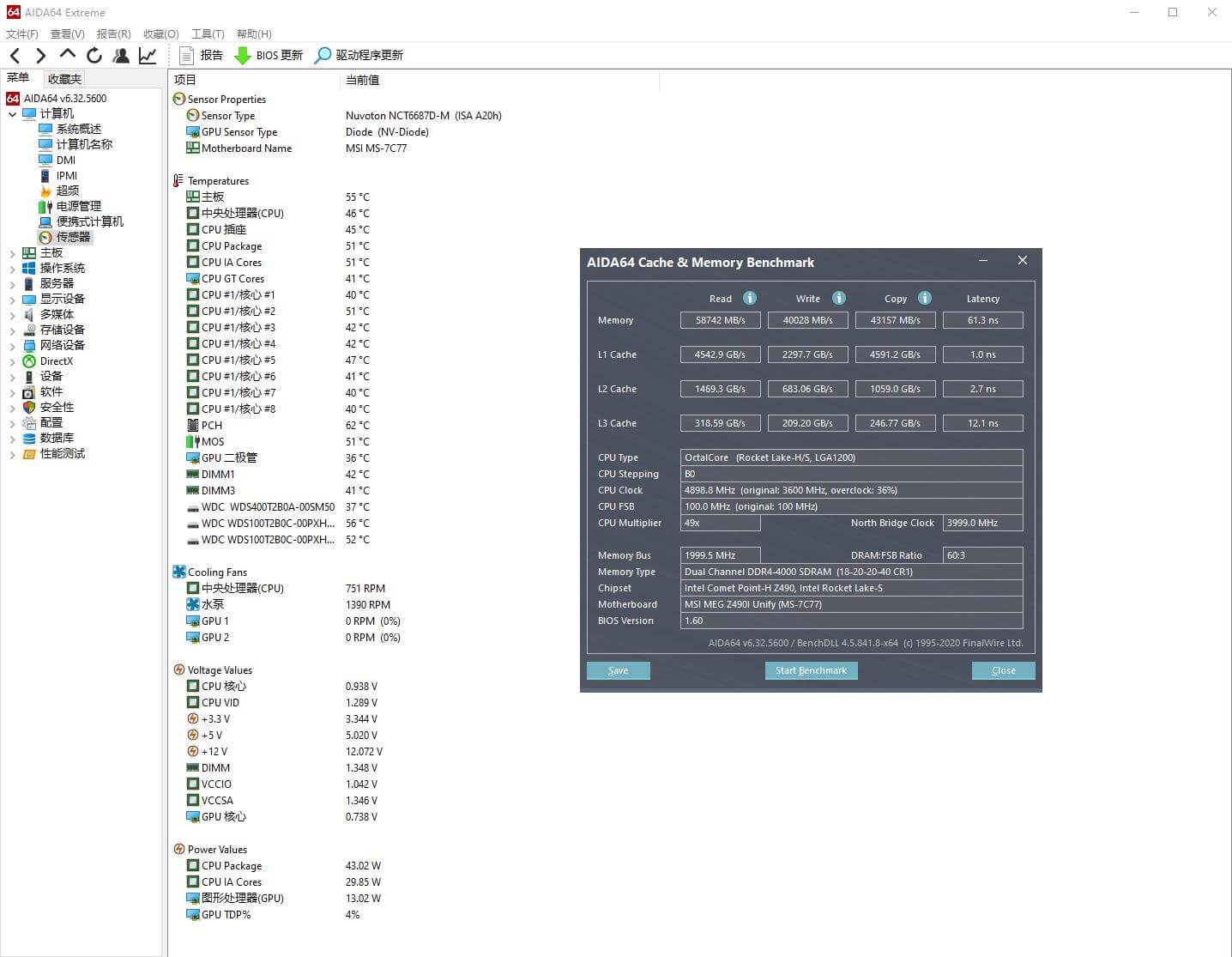 It remains to be seen how this will pan out on Intel’s Rocket Lake CPU lineup, given the Z590 chipset boards support speeds above DDR4-5000 MHz. But by default, Rocket Lake unlocked “K” SKUs come with native support for DDR4-3200 MHz memory frequency. 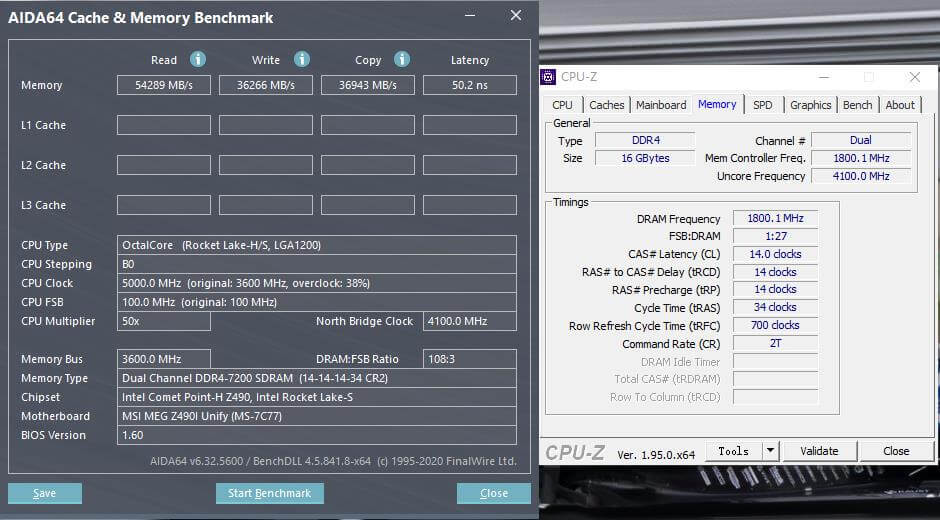