Seems that Crytek is getting ready for the next-gen era and if this new recruitment is anything to go by, we can be sure that its games will sport more than pretty graphics. As spotted by NeoGAF, Todd Papy – design director of God of War: Ascension – has joined Crytek and is currently working on an unannounced title. 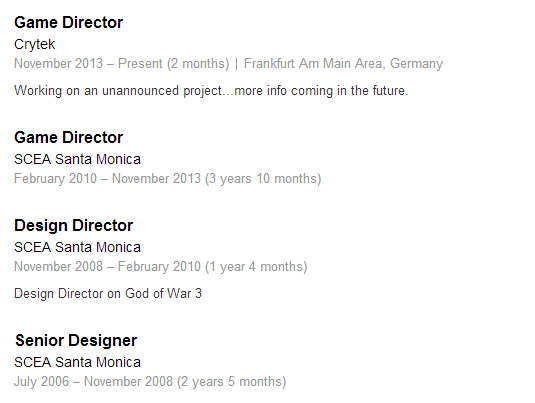 Of course we can only guess at what Todd Papy’s new game may be, but if God of War: Ascension is any indication then we can expect lots of QTEs. Perhaps a mix between God of War: Ascension and Ryse or a sequel to that Xbox One exclusive title? Seems plausible. After all, Ryse was – in many ways – inspired by GOW.

It’s also uncertain whether this unannounced game will be coming on all platforms or on specific ones.

On the other hand, it’s good to see Crytek gearing up for next-gens. Let’s just hope that its games will be more than tech demos of its game engines (and that they won’t be dumbed down yet again).