Resident Evil: Village is scheduled for release on May 7th. Capcom recently published some gameplay footage and a demo. Unfortunately the current demo is not available on the PC. However, a different demo will be available for everyone in spring.

Furthermore, there are several different versions available, from the 70 dollars basic edition, to the insane 1800 dollars collector’s edition. This specific collector’s edition is only available in Japan. It contains several goodies, including a full size replica of Chris Redfield’s Buttonless Chester coat.

Lastly, the collector’s edition contains a map of the game with four major locations, and eight smaller locations.  These major locations are the Heisenberg’s Factory, Moreau’s Reservoir, House Beneviento, and Castle Dimitrescu.

You can take a look at the map below. 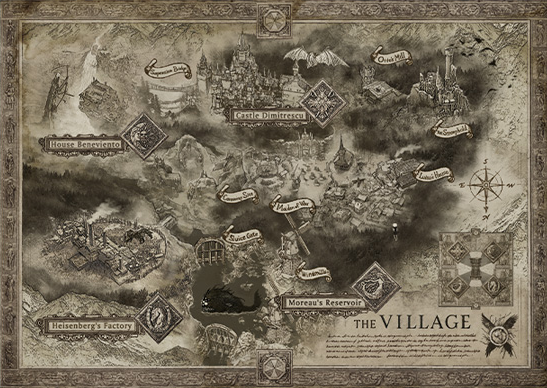