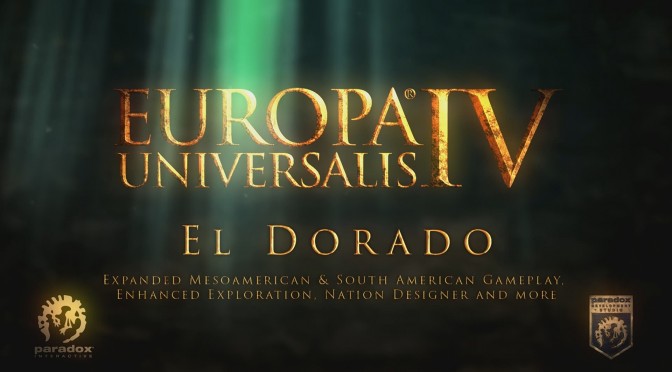 Paradox Development Studio announced today the El Dorado expansion for Europa Universalis IV. According to the press release, the centerpiece of El Dorado is the Nation Designer, a tool that let’s you customize your starting nation in a campaign.

Players will choose their starting capital and neighboring provinces, modify their starting culture and leader and then lead this new nation to new and original heights of glory.

This expansion’s historical focus on the Central American and South American theaters of exploration will challenge players with new decisions worthy of a king or conqueror.

“As the Aztecs, subject the Mexican plain to your rule but make sure you have enough vassal kings to sacrifice to your angry gods. As the Europeans, push deeper into the jungles of the Amazon, following rumors of lost cities and magical fountains. Defer to the Pope as he intervenes to divide the New World among squabbling empires.”

– A deep Nation Designer gives you new starting options for your games, including national ideas and custom monarchs
– Experience the new Nahuatl, Inti and Mayan religions with blood sacrifices or Sun Worship
– Send your conquistadors to hunt for the Seven Cities of Gold, or your explorer on exploration missions around the world
– Gold Fleets can traffic New World wealth back to Europe, and be targeted by your privateer fleets
– Use your trade fleets to hunt dangerous pirates
– Maintain good relations with the Pope so you can get a corner of the world to call your own in the Treaty of Tordesillas