Ray Tracing is considered by a lot as the holy grail of computer graphics and lighting. However, there haven’t been any engines capable of offering such a feature in the last couple of years. And even though we’ve got some path tracing engines lately, like the Brigade 2 Engine, we’ve still have a long way until we get games without those annoying noise side-effects. Or not? According to Samual Lapere, OTOY’s graphics developer, Playstation 4 might be able to offer real-time ray tracing in a couple of games.

According to Samuel, PS4 may be able to offer some ray-tracing in HD and even some path tracing from thoroughly optimized engines like the Brigade Engine (especially since this engine runs well on AMD’s HD 7000 series cards).

But what features should PS4 and PC fans expect from such attempts? Samuel revealed that players can expect mirrorlike reflections and proper soft shadows (the later are already possible on a 7970 card in real-time). However, for a number of path tracing effects – like color bleeding, blurry reflections and raytraced DOF and AO – PS4 will still not have enough power.

Of course, this is if everything goes well and if a developer decides to exploit PS4’s architecture in order to get ray tracing working.

Special thanks to NeoGAF’s member ‘onQ123’ for this information. As a bonus, you can find below a new screenshot from the Brigade Engine (shared by Hayssam Keilany) and a video from the latest build of it. 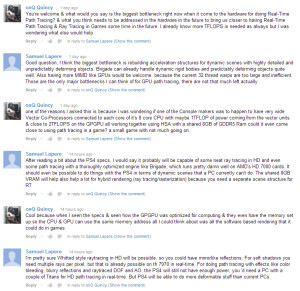 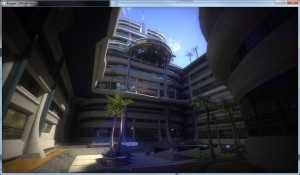