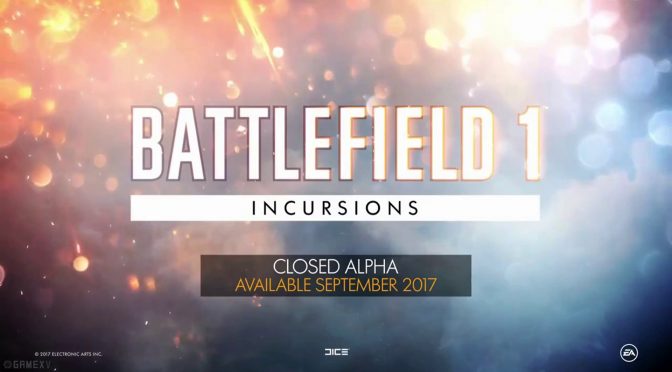 Battlefield 1, notorious for its massive maps and lengthy combat from afar, has turned itself on its head with a new “competitive” mode being added to the game. “Incursions” will give players an opportunity for fast paced combat like nothing else seen in the Battlefield franchise.

“Incursions” will begin in closed alpha and is designed to an intense game mode for players that are wanting to jump into a quick strategic game of Battlefield. The game mode won’t be taking away vital aspects that players love from Battlefield 1 such as the vehicles. The game mode includes the use of small anti-infantry tanks which are quite powerful and can change the course of the game very quickly when used effectively.

With this new game mode on its way out we will no doubt start to see some professional play of Battlefield 1 since it is in fact a 5v5 game mode. So expect perhaps an eSports scene for Battlefield 1 as DICE refine all the edges to their new game mode and move forward from their big open world war zones into tight nit 5v5 matches but still keeping that same feel players love.

It wouldn’t be Battlefield without vehicles. Much like the Behemoths in the main Battlefield 1 experience, vehicles can turn the tide of an Incursions Closed Alpha match. But they aren’t unstoppable, and destroying an enemy vehicle can be just as decisive as deploying one.

Your choice in kit plays a critical role in the success of your squad, while every destroyed piece of environment can shift the entire momentum of battle. Only the sharpest strategic teams will rise to the top of the competition.”

For anyone interested in the closed alpha the link can be found here.