AMD plans to release its next-gen APUs by this year, most probably in the first half of 2021. The Ryzen 5000 series “Cezanne APU” lineup will be a direct successor to Renoir. These are based on the ZEN 3 microarchitecture fabbed on the 7nm process node.

These will most target the high-end notebook (FP6), and mid-range desktop APU segment (AM4 socket).

Recently an entry-level AMD Ryzen 3 5300G ‘Cezanne’ APU was listed on EBay for $176.99, coming via @harukaze5719. The APU is no longer available on eBay, but we have two gaming benchmarks to share, which shows how impressive an APU can be for casual or light gaming.

AMD has not even announced its AMD Ryzen 5000G Cezanne Desktop APU lineup, but some early engineering samples have already been acquired by independent testers, and system integrators. While AMD has already released its Ryzen 5000 mobile (Cezanne) SKUs, the DIY market is still awaiting the desktop variants.

The Ryzen 3 5300G Zen 3 APU listed on eBay carries the 100-000000262-30_Y orderable part number, and the poster has listed it as an engineering sample APU. It is a quad-core desktop APU based on Zen3 architecture, sporting 4 cores and 8 threads with simultaneous multithreading (SMT) enabled. 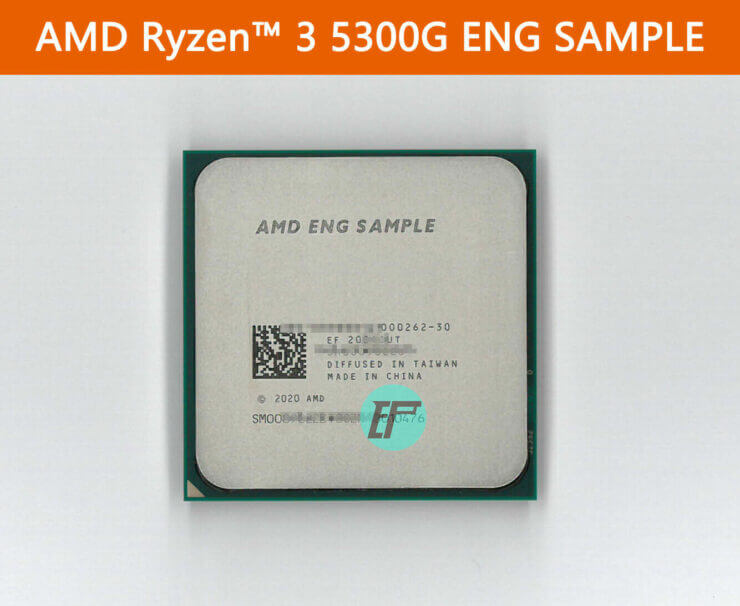 But, you should first make a note that this is an early engineering sample/ES, so the final gaming performance and the APU clock speeds are going to vary, and might end up being higher as well.

This entry-level APU features a base clock of 3.50 GHz, while the boost clock is rumored to be around 4.2 GHz.

But Zen 3’s performance uplift comes from the IPC advancements rather than high clock speeds. The APU also features 8 MB of L3 cache, 2 MB of L2 cache, and a TDP of 65W. It also sports the Vega 8 iGPU onboard. Cezanne offers twice the amount of L3 cache in comparison to Renoir APUs.

Based on the model/SKU number we expect the Ryzen 3 5300G to be the successor to the Ryzen 3 4300G APU. But previously, AMD actually decided to reserve the desktop Renoir APUs only for pre-built OEM systems; however, there are rumors of Zen 3 APUs arriving on the DIY market as well. 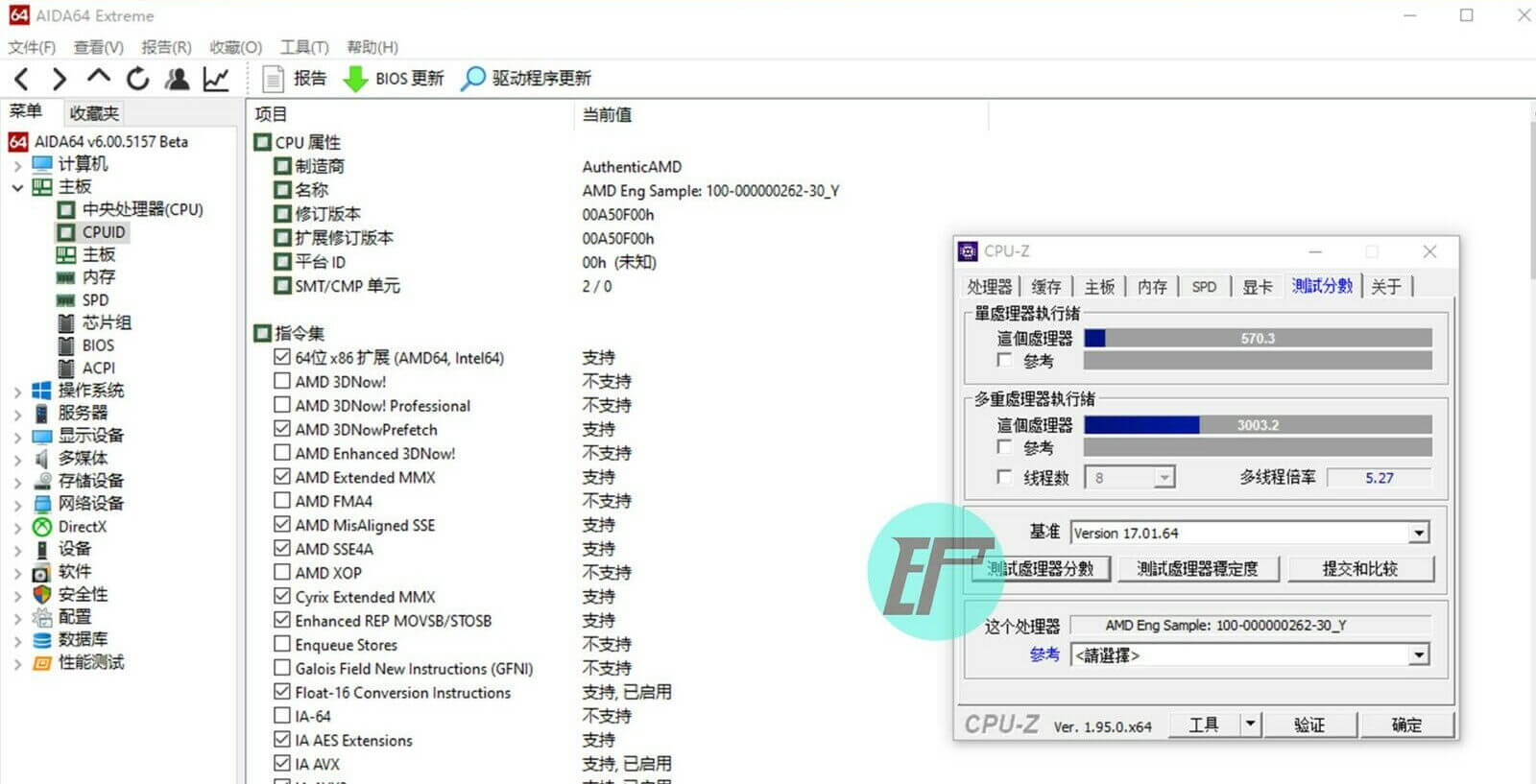 Coming to the gaming benchmarks, there is not much to share, since the tester posted scores of just two PC games, Battlefield V and Battlefield 4. Nonetheless, the benchmark results show the impressive processing prowess of this APU. More games will be tested as we approach the final retail release date.

I’m not covering the synthetic benchmarks, but if you are interested you can watch the full video posted by the tester (see below). 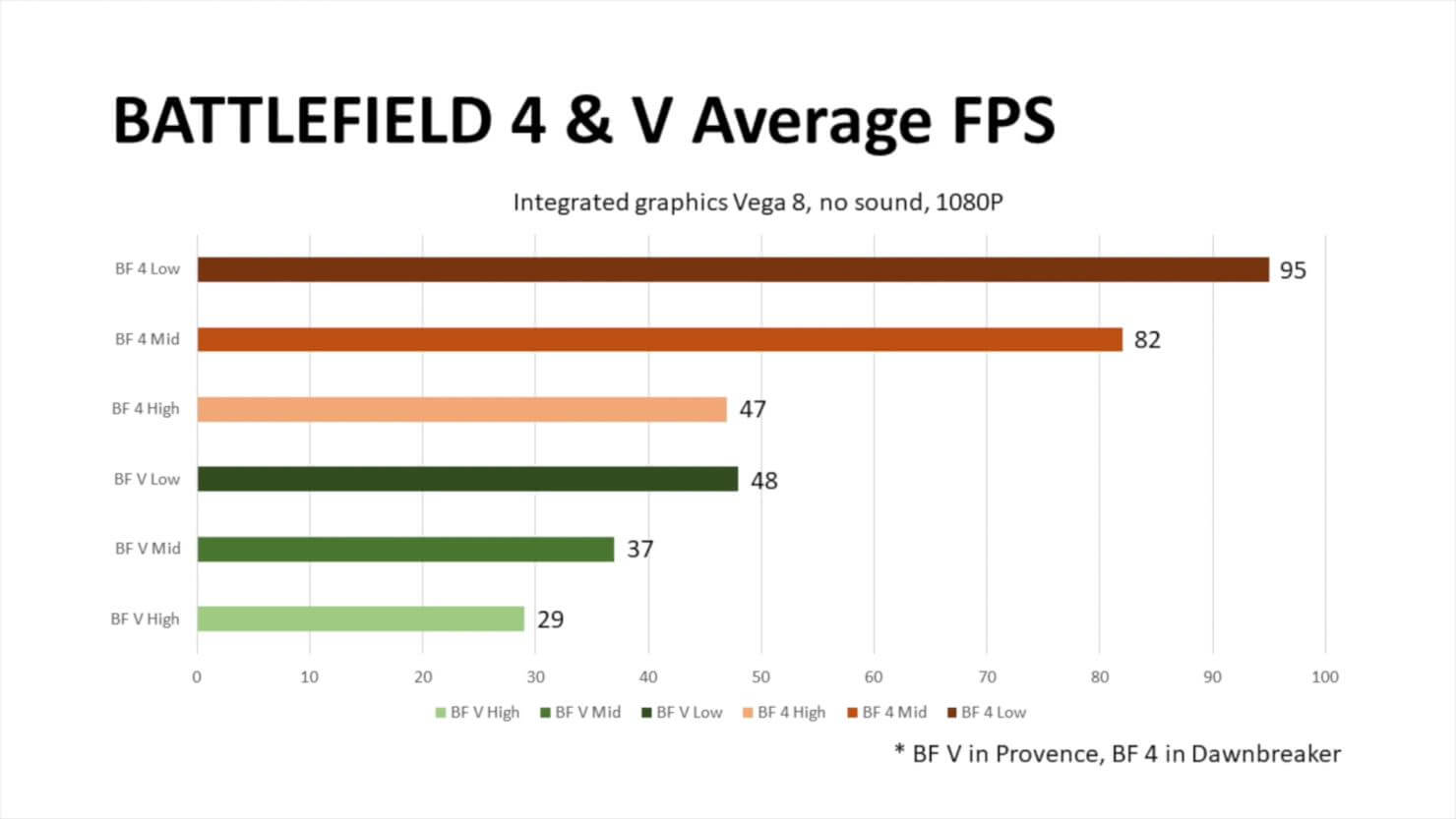 Based on these FPS number, the Ryzen 3 5300G already appears to be a decent APU for gaming at 1080p resolution, and 720p performance is going to be even higher, should you plan to play games on this resolution. Make a note that this is an entry-level APU meant for casual and light gaming.

At 1080p, the Ryzen 3 5300G’s Vega graphics reportedly offered frame rates up to 48 frames per second (fps) on Battlefield V and 95 fps on Battlefield 4 with low settings. With medium game settings, the APU’s frame rates dropped to 37 fps and 82 fps, respectively.

When it comes to the high game settings the Ryzen 3 5300G’s graphical performance obviously took a hit. The APU ran Battlefield V at 29 fps and Battlefield 4 at 47 fps, respectively, which is still pretty decent for an early engineering entry-level sample, at least in my opinion.

These are APUs, and unlike normal desktop CPUs, these have integrated or onboard graphics (not comparing here with Intel’s iGPU though). Simply put, an APU is constituted of both the CPU and GPU cores on a single die. They often serve as an approachable entry-level graphics solution for budget gaming PCs, as well as notebooks.

Gamers who don’t want a dedicated or any discrete GPU can go for an APU setup for “casual” light gaming. Something is better than nothing, so it never hurts to have an APU, if you don’t have or want to afford a discrete gaming GPU.

Until now AMD has only released low-end budget APUs, with the assumption that serious gamers and professionals will mostly go for a discrete graphics cards in their systems, which seems to be a reasonable assumption if you ask me. But since the new Renoir APU lineup things have been a bit different.

An APU can also be seen as a backup option, just in case your GPU dies. Or, these could alternatively be used in NAS boxes, servers, media centers etc. These new APUs will use the same Vega architecture as the Ryzen 4000 Mobile chips.

This seems like a slight bummer since NAVI APU would have been an interesting option, in my opinion. The GE SKU APUs on the other hand might be an ideal option for compact gaming PCs which require high core counts along with low levels of power consumption and heat, at just 35 Watts TDP.

AMD can also target the “pre-built” and OEM PC market with the Vega integrated graphics. Lastly, here is the full review video posted by the seller/tester.