They all seem to be part of the “Matisse Refresh” family. Amazon Italy currently listed two SKUs on its website, the Ryzen 9 3900XT and Ryzen 5 3600XT. Only the Ryzen 7 3800XT is missing for now. The official Amazon page has apparently also been taken down.

According to the Amazon’s page listing, AMD will officially announce these Matisse refresh Zen 2 chips on June 16, with an expected release date of July 7th. This is assuming the listing on the Amazon Italy page was legit. These chips will arrive with same specs as their vanilla counterparts having identical cores, threads, and cache, with the only exception being a change in the clock speed, i.e. 100 MHz higher boost clock than their previous counterparts.

The XT models appear to be higher binned chip variants than the non-XT SKUs. But the pricing is not fully confirmed since it could also be a ‘placeholder’, or just an early inflated pre-order price. We don’t have any info on the base clock, but the boost clock of both these SKUs is 100MHz higher than their counterparts. Despite the higher boost clocks, the Ryzen 9 3900XT and Ryzen 5 3600XT have the same TDP, which is 105W for Ryzen 9 3900XT and 95W for the Ryzen 5 3600XT.

The pricing seems to be very high. But like mentioned before, this could be a placeholder, or just an early inflated pre-order price.  Assuming AMD is indeed following this price strategy, these SKUs are going to be a hard sell, given the price/performance ratio, at least in my opinion. Honestly, I’m not sure how well these SKUs are going to stack up against Intel’s Comet Lake-S lineup of processors. We need to wait for official Gaming and synthetic benchmarks to come to any conclusion. 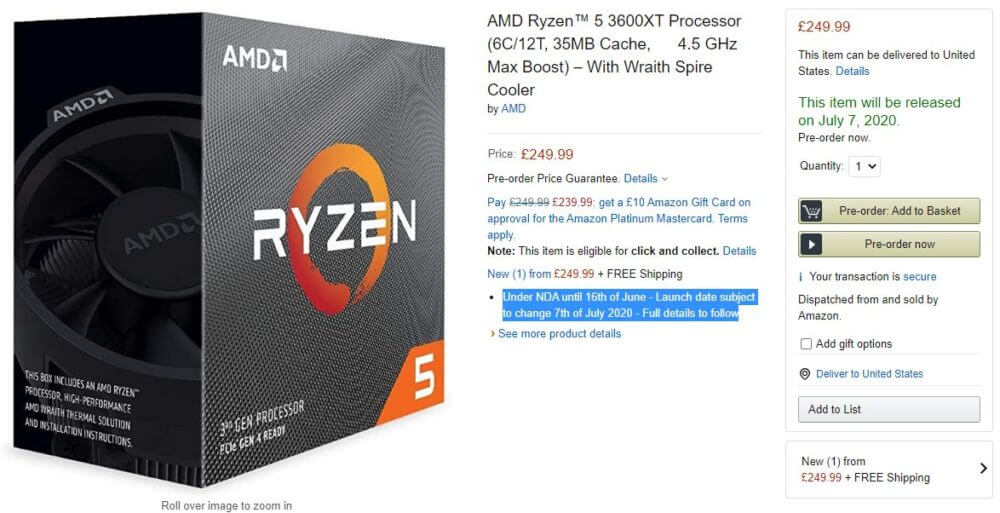