Man, it’s been over three years since the launch of DSOGaming. During these past few years, we’ve had our ups and downs. And to be honest, it’s been a pretty ‘tricky’ and ‘weird’ year. As we’ve already said, 2014 was a crucial year for DSOGaming, and thankfully everything went according to our original plan. In the following paragraphs we’ll talk about the things that happened these past twelve months, as well as our future plans. So without further ado, here we go.

First of all, let’s start off with our Interstitial Ad. You know, the one you have to skip every 24 hours. We are happy to report that in 2015 we might be able to remove it. This is a huge deal for us. And this is the first time we are comfortable stating something like that. DSOGaming is constantly growing up, which is obviously a good thing. As soon as we get big enough to cover DSOGaming’s expenses without its presence, we will remove it.

2014 has been a great year. We’ve had over 5.7 million total visitors and 3.7 million unique users. These are really healthy numbers, and way above the ones we had in 2013. Obviously this is thanks to you, our readers. Without you, we wouldn’t be here, and DSOG wouldn’t be what it is today. So a big ‘thank you’ to everyone for supporting us.

Our most successful (in terms of pageviews) story was a Skyrim feature. Skyrim is a truly beautiful game, and we are glad that many viewers found our galleries interesting. We’re also glad that we put all those talented modders in the spotlight as they deserved the attention. Our initial article about Denuvo anti-tampering technology was also successful, as were our reports for Microsoft, Crytek and Watch_Dogs. Surprisingly enough, our most successful PC Performance Analysis was the one for Call of Duty: Advanced Warfare. 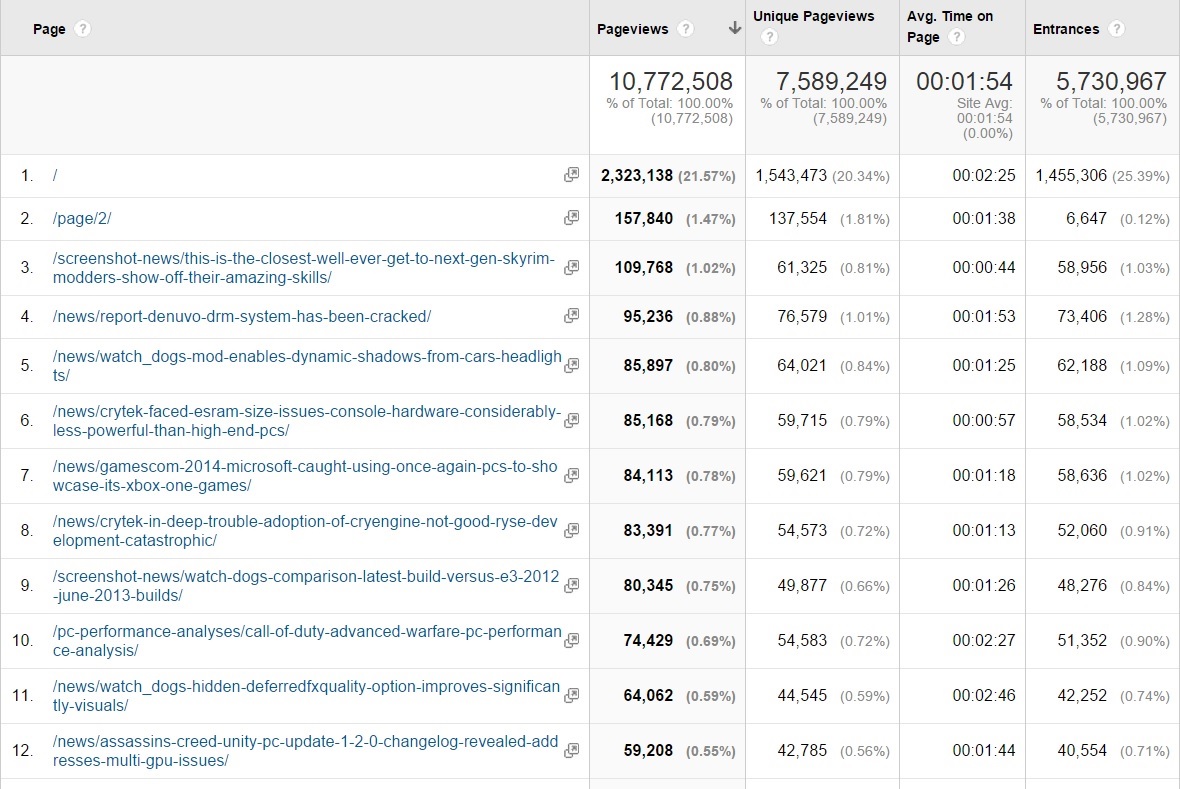 DSOG is also a truly independent video-games website. What this means is that we have not signed any contract with any publisher for any advertising purposes. We can talk about everything. We have complete freedom over what we write, and we do not have to ‘sweeten’ the ears of specific companies. The reason we declined such deals is really simple. We prefer freedom over extra revenue. Imagine what would have happened if we had signed an advertisement agreement with, let’s say, Ubisoft – who has not sent us a review code for Far Cry 4 (perhaps due to what happened with Assassin’s Creed: Unity).

Naturally, the ability to write about anything we want comes with a high price to pay. Certain companies may stop sending us review codes, while others may even put us on their blacklists. Yeap, freedom comes with a price. This is something we knew from the get-go, and we will gladly embrace and pay that price.

While 2014 was a great year for us, we did fail you in some areas. Our ‘Weekly Comment Of The Week’ and ‘Weekly Video Of The Week’ columns did not attract your attention and as a result of that, we decided to discontinue them. Not only that, but our ‘Comment Of The Week’ banner felt sometimes more like a ‘Comment Of The Month’ banner. Moreover, there has only been one User Article in 2014, something that made it crystal clear to us that you are mostly interested in our stories rather than writing your own. Furthermore, there is still no AMD GPU on our PC Performance Analyses.

So, what’s to come in 2015? Apart from taking a closer look at removing our Interstitial Ad, we’ll be sure to include an AMD GPU on our PC Performance Analyses. Moreover, we’ll keep supporting indies and modders. You can expect lots of Performance Analyses and News regarding PC gaming. We’ re also trying to have more Interviews this time around, though this is entirely up to publishers and developers. Still, we’ll make sure to contact most of them regarding their triple-A titles.

In 2015 we may also increase our manpower. We’ve been getting a lot of requests for a ‘News’ poster position. As we’ve already said, we really can’t maintain any additional member at this point. In other words, only volunteer positions are open and we don’t like the idea of volunteering (on a daily basis) at all. While in the beginning people will feel proud of themselves for being featured as News posters in DSOG, they will eventually feel that they are being used. We’ve been there, we know that feeling, and we won’t become what we’ve been criticizing all these past years.

And that is that everyone. We hope that 2015 will be an even greater year for both DSOG and PC gaming. DSOG is not going anywhere as we are currently stronger than ever. Here’s to a wonderful 2015!