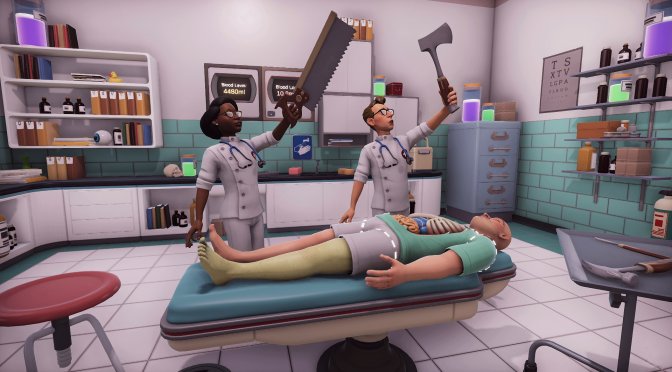 Bossa Studios has shares an in-depth gameplay trailer for its upcoming 100% medically-inaccurate operation sim, Surgeon Simulator 2. The new Gameplay Overview Trailer reveals a great deal more of the what players can expect from it in a 5 minute voiceover-accompanied format. In addition, it includes an endoscopic peek at the Bossa Labs Creation Mode; an all-singing, all-dancing toolkit that arrives with the game.

Surgeon Simulator 2 is the vastly expanded sequel to the original bonafide operation sim, Surgeon Simulator. The first game came out in 2013 and became notorious for it’s frenzied gameplay. Surgery remains the lifeblood of this new experience, but this time around, instead of a floating hand confined to the operating table, players control a first-person Surgeon with an entire medical facility to explore. Surgeon Simulator 2 also introduces true co-operation to the franchise – up to 4 players can explore and operate together. But will your team become heroic healers… or barbaric butchers?

As well as a gameplay deepdive, the Gameplay Overview Trailer also teases a little more about the cutting-edge Bossa Labs Creation Mode; a set of easy-to-use and intuitive tools used by the beloved development team to make the game. In this mode, the power to create surgical shenanigans (and much, much more) is in the hands of our players.

Surgeon Simulator 2 will release this August, exclusively on Epic Games Store. Bossa Studios will be also revealing more information about it and the Bossa Labs Creation Mode soon.