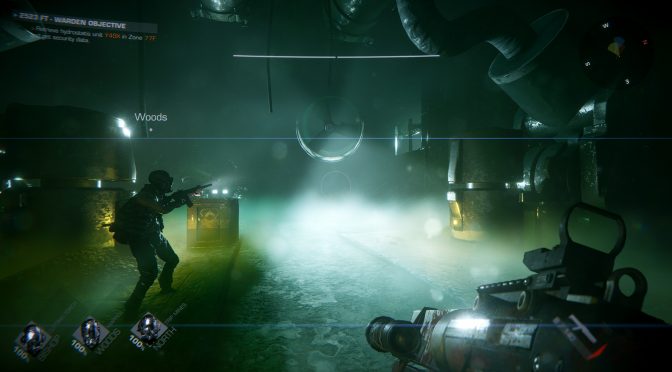 10 Chambers Collective, an independent nine-man Swedish development team led by the game designer behind the PAYDAY franchise, released uncut gameplay from a play session the developers had at their game studio. Therefore, this video will give you an idea of what GTFO is all about.

“We’re making GTFO for the hardcore gaming community – a community I would like to say we’re a part of as well – and I know I prefer real gameplay over cinematic trailers that aren’t showing anything from the actual game you will be playing. It’s also the best way of communicating what GTFO is: How important communication and teamwork within the squad is, which is why we’re also including the voice chat audio from the play session.”

The 9-minute long gameplay video shows how the developers cooperatively work their way through the Complex – the underworld that is GTFO – in look for a “Hydrostasis Unit”. The game gives little help on the direction and the crew needs to fend for themselves, for example via using computer terminals and watch for signs on the doors. Comparing to the latest gameplay footage released by the nine-man team in 2018, the improvements are visible in everything from fog and lighting to the actual design of the tools and weapons.

Since GTFO was first announced, the team has emphasized how it is targeted at hardcore gamers. The difficulty level is high and you will need to have a tight team with rapport and shorthand, as well as a will to cooperate and coordinate. The fact that the game is hard is made apparent by the fact that even the GTFO developers wipe during this attempt.

“Since the playable demo at E3 and Gamescom 2018, we’ve upgraded the game across the board. Graphics, gameplay, optimization and huge improvements to the fog and lightning – you will notice the difference.

Communication is key in GTFO. Running away from your team and trying to be a gun blazing renegade, will never work. You need to cooperate and have a well thought out strategy as a team before daring to go into a new room of the expedition. Work together or die together”.

“Our enthusiastic community has given us a lot of energy during the development of GTFO, and these fans are also the reason why we really want to make sure that we deliver on our promise: The hardcore co-op experience they’ve been longing for. This Halloween, we’re giving them a chance to get a taste before our planned Early Access release late this year.”