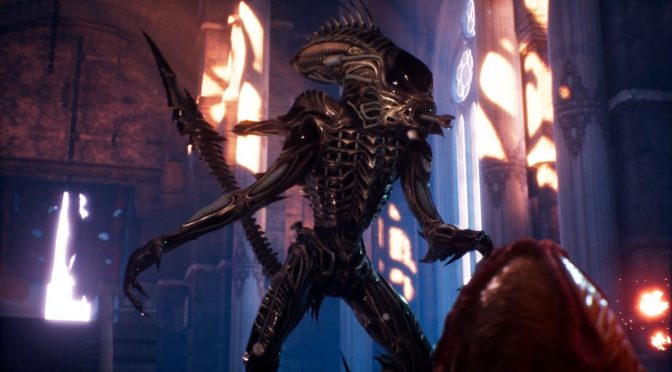 A lot of us were excited when it was revealed that 20th Century FOX had trademarked Alien: Blackout, right before the Video Game Awards 2018. Alien: Blackout was listed as a computer video game and even though it was not officially unveiled at that event, we’re pretty sure that it will eventually be announced, perhaps for next-gen platforms. Still, and since a lot of gamers want a new Alien game, YouTube’s ‘Aklar_45’ has created the Raven xenomorph from Aliens, showcasing what a new Aliens game could look like in Unreal Engine 4.

In case you weren’t aware of, the Raven was a Xenomorph of unknown breed that was encountered on LV-426 by a squad of Colonial Marines from the USS Sephora. The creature was found dwelling in the sewers beneath the ruins of Hadley’s Hope. It was eventually killed by Corporal Winter, who fought the creature in a Power Loader.

As the Alien Anthology reads:

“It’s body resembles an ordinary Xenomorph, but larger and is almost entirely encased in an armored, spiked exoskeleton. Its tail has ridge of spines at the base of the tail’s harpoon-like blade and like the Queen, it also has high heel protrusions from its feet. Its head possesses a ridged carapace, much like a Xeno Soldier along with a row of spikes on the top of its head. The left side of the Raven’s face is scarred, revealing some parts of its skull consisting of an eye socket and a nasal cavity beneath the dome.”

Aklar_45 has also created a realistic Alien egg alongside the Xenomorph, and what’s really cool here is that the Raven is actually animated. Not only that, but the 3D model looks really detailed so hopefully the next Alien/Aliens game will match the quality of this model.

Below you can find a video showcasing the 3D model, as well as a 3D model viewer via which you can rotate and look from a close range the Xenomorph.